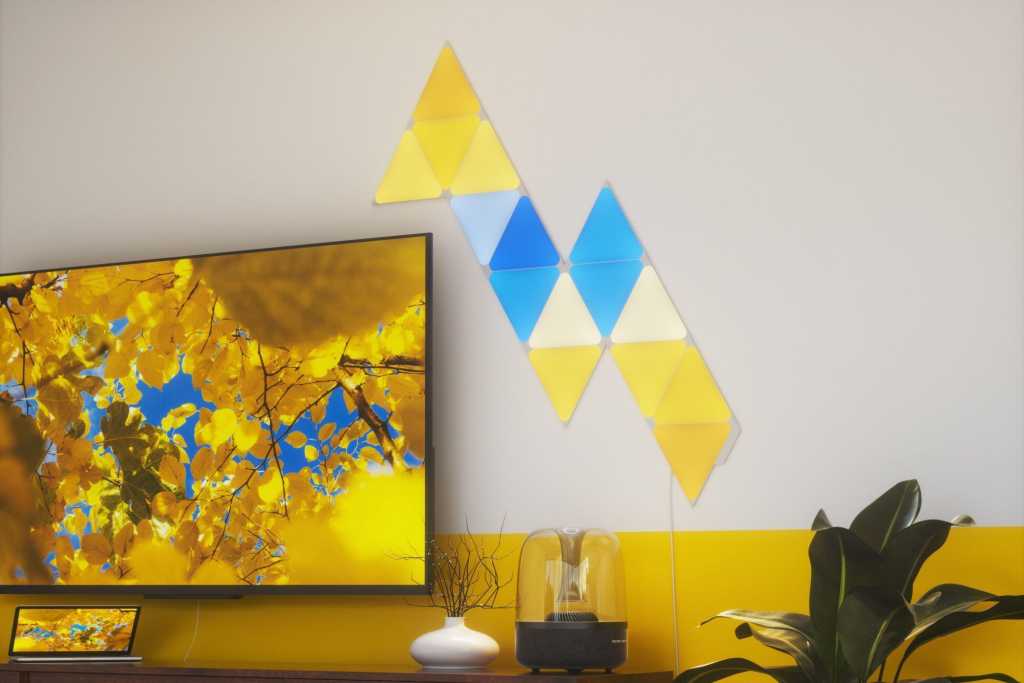 Just a few months after the release of its modular Hexagon light panels, Nanoleaf is unwrapping the next entry in its Shapes smart light series, Triangles and Mini Triangles, while also announcing a smart bulb and light strip compatible with the long-percolating Thread IoT protocol.

On sale now, starting at $200 for a seven-piece starter kit (which includes a power supply and a snap-on controller), the Triangles are wall-mountable light panels that can be connected together using small, snap-on links. The smaller Mini Triangles cost $120 for a five-piece starter kit.

While Nanoleaf’s previous-generation light panels, the Canvas light squares and the triangular Light Panels, weren’t compatible with each other, the new Triangles, Mini Triangles, and Hexagons (which we’ve reviewed) can be connected together thanks to Nanoleaf’s new Connect+ technology.

Like the Hexagons, the Wi-Fi-enabled Triangles and Mini Triangles support Alexa, Google Assistant, HomeKit, and Samsung SmartThings, and they can be grouped, scheduled, and controlled using the Nanoleaf mobile app.

You can also tap or swipe the touch-sensitive panels to turn the lights on and off, adjust their brightness, change lighting scenes, play interactive light games, or even control your compatible smart home apps.

Speaking of the Nanoleaf app, Nanoleaf has overhauled and streamlined the app’s (somewhat confusing) dashboard, while adding a new color picker with a jumbo touchscreen palate, complete with color ratios.

Nanoleaf also announced the first of its new Essentials line of traditional smart bulbs and lights, including a standard A19 bulb and a multicolor light strip.

Slated for release on November 15 exclusively in Apple stores, both the A19 bulb ($19.95) and the light strip ($49.95) will be compatible with Thread, an open-source, low-power mesh networking protocol for IoT devices that’s backed by the likes of Google, Samsung, Qualcomm, and Apple. Designed to securely connect smart home devices without the need for a hub, the six-year old Thread protocol is still getting off the ground, and Nanoleaf’s Essentials lights would be among the very first smart home devices to support it.

Interestingly, Apple just announced that its new HomePod mini includes a Thread radio. Is there a connection between Nanoleaf’s new Thread-compatible lights and the HomePod mini, given that the new Nanoleaf Essentials devices will only be available in Apple stores? Nanoleaf isn’t saying for now, but it promises to reveal more details next month.

In any event, Nanoleaf says that both the A19 bulb and the light strip boast “endless” colors (or, more likely, in the 16 million-color range) and will be controllable through the Nanoleaf app and voice commands.

Nanoleaf didn’t specify what other types of bulbs will eventually appear in its Essentials line, but a promotional image shows what appears to be BR30 spotlights, decorative candle bulbs, and GU10 and/or GU24 downlights.

While I haven’t seen Nanoleaf’s new Essentials lights in person yet, I do have samples of its Triangles and Mini Triangles, so keep your eyes peeled for a full review.