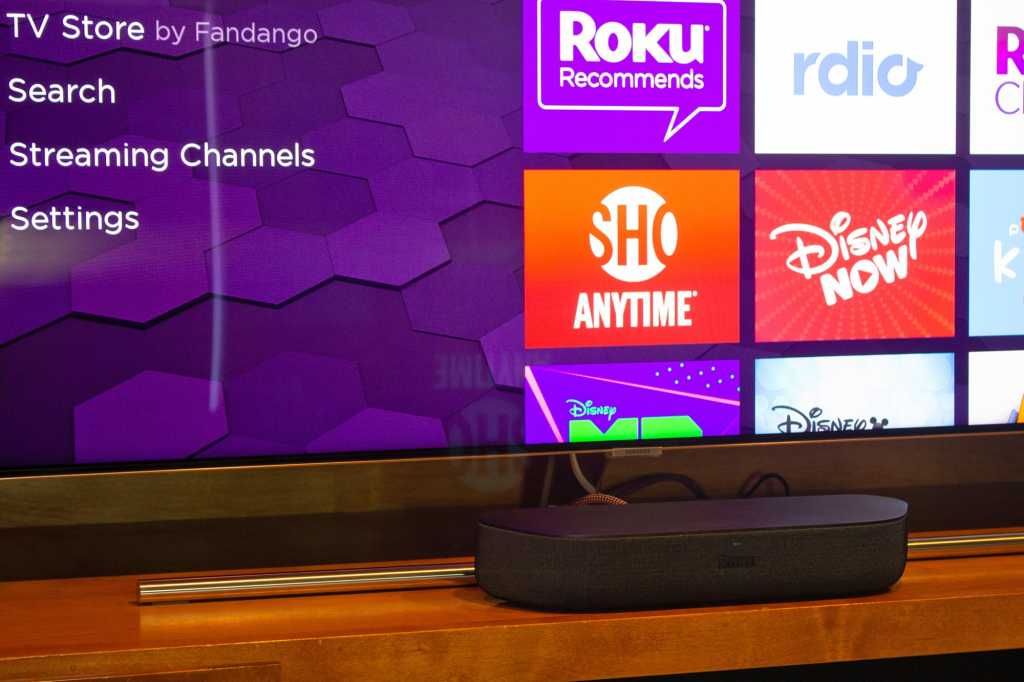 Compromise is inherent in any two-in-one product. If you can compromise on audio, you’ll find the Roku Streambar to be a very good entertainment value.

The diminutive Roku Streambar is not one of the world’s great soundbars, but there’s plenty of value packed into its 2.4 x 14 x 4.2-inch enclosure (HxWxD) for the audience that Roku is targeting. The Roku Streambar not only sounds better than the speakers built into most TVs—including some of the higher-end models—it also features Roku’s 4K HDR streaming hardware and operating system.

Our cord-cutting expert, Jared Newman, just reviewed the new-for-2020 Roku Ultra for us, so I’ll focus primarily on the Streambar’s audio experience here.

If you’re of a mind to, you can expand the Streambar with Roku’s wireless subwoofer and surround channels—although doing so will take your initial $130 investment north of $500—at which point you’re probably not Roku’s target audience and should consider buying a higher-end speaker instead. But if you want to start small now and expand over time, the option is there. That can’t be said of most audio products in this price range.

The Streambar’s cabinet is fabricated from a blend of neutral-sounding polycarbonate and ABS plastic and is wrapped in black fabric on the front and sides. Its top is covered with a rubbery soft-touch surface without any buttons. The Roku logo on the front of the speaker is considerately painted black and doesn’t draw much attention to itself.

Two of the Streambar’s four full-range drivers are mounted in the face of the enclosure, and the other two are mounted at oblique angles in the left and right end caps, an arrangement that endows this soundbar with a wide soundstage that belies its size. The 1.9-inch (48mm) paper cone drivers feature neodymium magnets, and each one is powered by a discrete Class D amplifier producing 8 watts RMS each (total output of 32 watts RMS or 64 watts peak power).

Around back you’ll find the typical inputs and outputs, leading with HDMI 2.0 with support for ARC (audio return channel), HDR10, and HGL high dynamic range information pass-through (but not Dolby Vision); an optical digital audio (Toslink) input; and a USB 2.0 port that can be used to access music and video files stored on a USB drive (more on that later). Another use for the USB port is to plug in an optional ethernet adapter if you have weak Wi-Fi, but are blessed with ethernet cable in your walls. (Speaking of Wi-Fi, the Streambar has a relatively quick 802.11ac adapter onboard.)

Finally, there’s a barrel-type power connection. Roku uses an inline power brick—death to wall warts!—and provides enough electrical cable to reach a two-prong outlet up to 7 feet away. Most people will set the Streambar in front of their TV, but the cabinet is outfitted with a pair of M6 x 8mm threaded mounts if you choose to hang the 2.4-pound speaker on the wall beneath your TV. Roku doesn’t sell a mount of its own, but you’ll have no problem finding compatible third-party options.

The Streambar has no analog audio inputs or outputs, which leaves Roku’s wireless sub as your only choice if you want bass reinforcement. There’s a Bluetooth 5.0 radio onboard, so you can stream music from your smartphone or tablet, but Roku has apps for all the most popular music-streaming services—including Spotify, Tidal, Pandora, and Amazon Music—so I think most people will stream music over Wi-Fi. But if you have a favorite service for which there is no app—Qobuz, for instance—Bluetooth provides the means.

The speaker comes with Roku’s voice remote, so you can use voice commands to search for content to watch, music to listen to, and to control the speaker in general. Ask for a specific song or artist, though, and Roku defaults to streaming from Pandora. When I spoke to the remote and said “Play ‘Dire Straits’ on Spotify,” this message appeared onscreen: “Sorry, music requests are not yet available on Spotify.” I got the same response when I asked to play music on Tidal. The remote can also turn your TV on and off and control its volume (including mute). It doesn’t have a headphone jack for private listening, like Roku’s top-of-the-line remote does, but you can stream audio from the speaker to the Roku app on your smartphone and listen with wireless headphones.

The remote is just the right size for the average-sized hand, and it puts the most commonly used navigation and transport buttons within thumb’s reach. My review unit had four buttons dedicated to Netflix, Disney+, Hulu, and Sling respectively. In my house, only that last button is wasted (because they can’t be remapped in software). The buttons for volume up, down, and mute are also each to reach, although they are on the right-hand edge of the remote versus its face. Again, you can read Jared’s review of the Roku Ultra for a deeper dive into the Roku remote.

Given the seemingly infinite universe of entertainment available for streaming, playing content from local or network storage just doesn’t have the appeal that it once did. But I’m glad Roku continues to provide the option, even if it doesn’t excel at it. The Streambar can act as a UPnP client and it supports all the mainstream container and file types you could want, including ALAC, FLAC, MKV, MP3, MP4, PCM, and WAV. It is limited, however, to a maximum of 24-bit audio at a 48kHz sampling rate (it has enough onboard processing power to downconvert as necessary).

Using the Roku Media Player app, I had no problem playing 16-bit, 44kHz FLAC audio files from a USB hard drive, and I was able to use the same app to stream similar files over my Wi-Fi connection while connected to a TwonkyMedia server on a WD MyCloud Mirror NAS box. I didn’t have the same luck when the speaker connected to a Plex media server on the same box. The same files I used with TwonkyMedia appeared in the Roku Media Player as MP3s, and I experienced audible dropouts every two seconds. I’m not sure if the server or the client app was trying to do the real-time transcoding, but it was failing.

Movie soundtracks on the Roku Streambar

I connected the Roku Streambar to the ARC input on a Samsung One Connect breakout box that was connected in turn to 55-inch Samsung Q7F QLED TV. In addition to streaming content from various services, including Netflix and Amazon, I also played the 4K UHD Blu-ray disc of Mad Max: Fury Road on a Cambridge Audio CXUHD Blu-ray player. I’m more accustomed to listening to a full 5.1-channel surround system with an Onkyo A/V receiver, Klipsch reference-series towers and satellites, and a vintage Boston Acoustics subwoofer, so I didn’t have the highest expectations for this tiny soundbar.

To set a more reasonable bar, I cleansed my sonic palette, so to speak, by first watching about half the movie using just the speakers built into the TV. Samsung does a great good job with TV audio, given the thin chassis its engineers must deal with; in fact, I’ve found the audio on this TV superior to several low-priced soundbars. That wasn’t the case here. Although the Streambar is outfitted with just four full-range drivers, it is capable of decoding Dolby Digital 5.1 soundtracks and doing meaningfully things with it. You’ll never mistake this speaker’s impressively wide soundstage for true surround sound, but it did a good job filling my 13 x 19 x 9-foot (WxLxH) home theater with the movie’s music and sound effects.

What I found lacking, no surprise, was bass response. The scenes in which Immortan Joe’s War Boys pound the massive truck-mounted kettle drums while in pursuit of Furiosa just didn’t have the same impact, for lack of a better term. Enabling “bass boost” in the Streambar’s sound mode setting helped (your other choices are “normal,” “reduce bass,” and “bass off”), but there’s only so much a 1.9-inch driver can do.

If you watch TV or listen to music late at night and don’t want to disturb other people in the house, there’s a “night” mode that suppresses the higher frequencies that travel longer distances. A “leveling” feature, meanwhile, can be turned on to clamp down on sudden increases in volume, such as often happens with commercial breaks. Those features are effective in their missions, but I left them turned off during my review.

As is increasingly popular, Roku also offers settings designed to make dialog and other types of speech more intelligible. “Speech clarity” boosts the frequency ranges in which human voices reside by a little or a lot (the third setting is off). And if you’re watching streamed content, I can also recommend enabling the feature that displays closed captions whenever you rewind a scene (you can also enable closed captions full time, of course, but that’s much more intrusive).

Unfortunately, the user interface doesn’t allow you to make any of these changes while you’re listening to music. You must exit out of the app, navigate to settings, make your adjustments, and then navigate back to the app you were using—hoping that you’ll be able to remember what the speaker sounded like before you tweaked it.

Listening to music on the Roku Streambar

There’s some interesting audio processing going on under the Streambar’s hood. All four of its drivers and amplifiers are identical, but they don’t sound that way when you listen to them up close. Playing the track “Wildfire” from the Mandolin Orange album Blindfaller, the vocals and bass were routed in stereo to the front left and right drivers, but the higher-frequency sounds of the drummer’s cymbals and the signature mandolins emerged from the drivers mounted in the end caps, resulting in the same broad sound stage that I noticed with movie soundtracks.

But without the distraction of action on the screen, my ears paid much more attention to the Streambar’s audio shortcomings. Singer-songwriter Andrew Marlin’s vocals came across with just enough distortion as to be slightly grating on the ears. It’s not something you’d notice if you’re just playing the speaker for background music, but you’d grow fatigued after long sessions of critical listening.

If you’re in the market for both a media streamer and a soundbar, but you’re working with a tight budget, the Roku Streambar is excellent on the first count and very good on the second. It’s not quite as good at streaming as the Roku Ultra (which supports Dolby Vision as well as Dolby Atmos, and it has an ethernet port, a remote finder, two programmable buttons and a headphone jack on its remote, and even headphones in the box).

On the audio front, there are better-sounding soundbars in this price range, but none that incorporate a full-fledged media streamer. It’s a great combination for your second and third TVs, a TV in a vacation house or an RV, or anywhere else you’ll willing to compromise just a bit on audio performance in the name of savings and convenience.