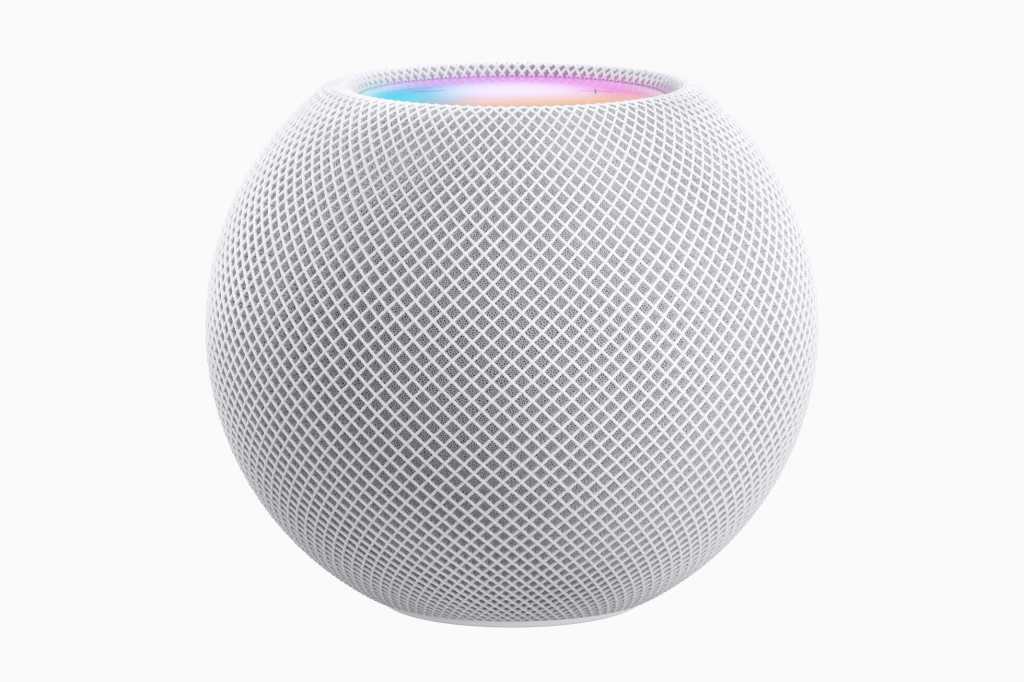 The follow-up to Apple’s $300 HomePod has finally arrived, with the smaller, spherical HomePod mini, complete with onboard Siri and a new “intercom” feature. The new smart speaker is slated to arrive next month.

Unveiled alongside the iPhone 12 during Apple’s “Hi, Speed” event on Tuesday, the $99 HomePod mini (pre-orders begin November 6 for shipping on November 16) takes a page from Amazon’s revamped Echo speakers (or is it the other way around?) with a ball-shaped, fabric-covered industrial design.

Set to arrive in white and space gray flavors, the HomePod mini has a backlit touchpad on top with integrated volume and playback controls.

Inside the 3.3-inch shell is a full-range, neodymium magnet-powered dynamic driver, a pair of force-cancelling passive radiators, and an acoustic wave guide at the bottom that’s designed to deliver 360-degree sound. Apple’s S5 chip (which also powers the Apple Watch 5) will analyze the tunes you’re playing and adjust the audio in real time.

As with the existing HomePod, the HomePod mini lets you control supported smart home devices simply by asking Siri (a three-microphone array plus a fourth internal microphone listen for the “Hey Siri” wake word), and you’ll be able to ask to hear your schedule, the weather, traffic conditions, the latest headlines, and so on.

Meanwhile, a new intercom system will let you call a specific HomePod speaker or all of your speakers at once, and you’ll also be able to get Intercom notifications on an iPhone, iPad, Apple Watch, on your AirPods, or even in your car via CarPlay.

Rumors about the HomePod mini have been circulating for more than a year, while images of the new speaker leaked just hours before the Apple event.

With its $99 sticker price, the HomePod mini is poised to compete with the refreshed Amazon Echo and Google Nest Audio smart speakers, which are also both priced at $99.

We’ll have a full review of the HomePod mini once we have a chance to take it for a test drive, so stay tuned.