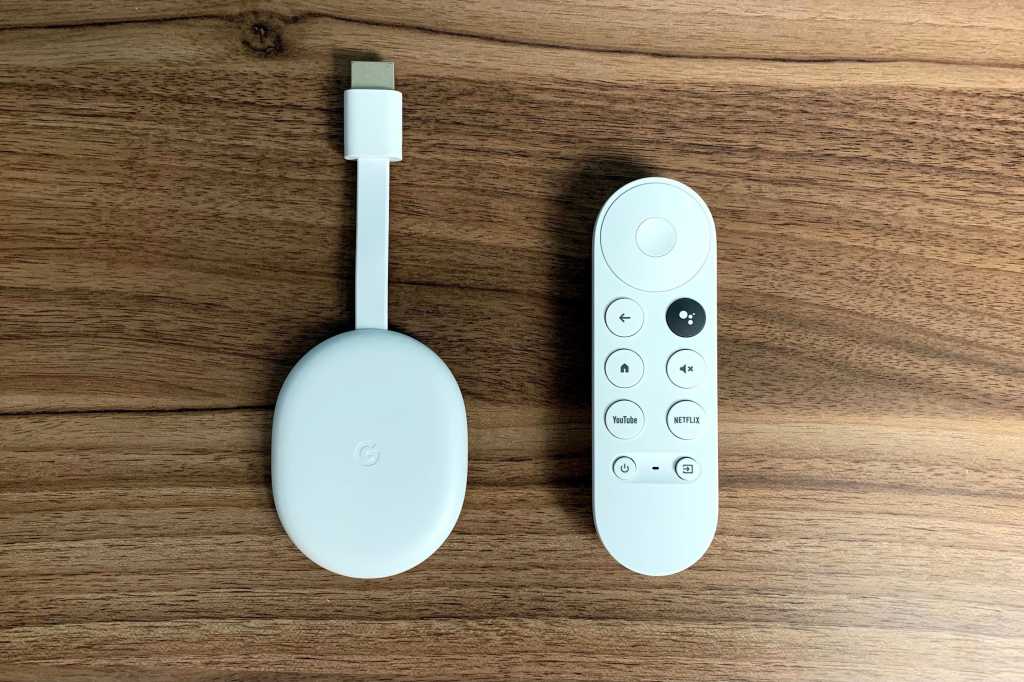 At its best, the Chromecast with Google TV represents how streaming is supposed to work.

You shouldn’t have to sift through a dozen apps—Netflix, Amazon Prime, Hulu, Disney+, HBO Max, and so on—just to figure out what to watch. Everything should instead be accessible from one menu that acts as a universal guide to streaming. Google’s new $50 4K streaming dongle tries to deliver on that ideal.

But because the new Chromecast often works so well, it’s all the more glaring when it doesn’t. The device suffers from inconsistent integration with streaming services, and the underlying Android TV operating system could use a bit more polish. Google’s bold new approach to streaming feels like the future of TV, but it’s a work in progress.

Not the Chromecast you know

It’s impossible to review the new Chromecast without explaining how it’s fundamentally different from its predecessors.

Like previous Chromecasts, you can still use a phone or tablet as your remote control, hitting the cast button in supported apps to launch media on the TV. But on the Chromecast with Google TV, that mode of interaction feels like a sideshow. The real star is the Google TV software—hence the name—which has apps you control on the TV itself with a proper remote. (We’ll talk more about how that software works in the next section.)

The remote control is similar to what you get with other streaming players, such as Roku’s Streaming Stick+ and Amazon’s Fire TV Stick 4K, except it comes in a choice of three colors—white “Snow,” light red “Sunrise,” and light-blue “Sky”—that match the color of the Chromecast dongle. There’s a circular directional pad, a back button, and a home button for getting around; a Google Assistant button for voice controls; and shortcut buttons for launching YouTube and Netflix.

The remote also has buttons for power, volume, mute, and input switching, along with an infrared emitter so you can program them to work with your A/V setup. Within Google’s settings menu, you can map each button to a different part of your A/V system, or you can use HDMI-CEC to control everything in unison.

In terms of tech specs, the Chromecast with Google TV has a quad-core processor, 2GB of RAM, and 8GB of storage, though only about 3.5GB of that storage seems to be available for apps. Navigation feels fast and fluid, and Google made sure to tick most boxes for format support, including 4K HDR video, along with Dolby Vision, HDR10, HDR10+, and HLG. The main omission is on the audio front: While the device can pass through Dolby Atmos audio, it doesn’t support Atmos decode, which Netflix requires for object-based surround sound. (You can read more about Dolby Atmos in this story.)

One more hardware-related note: While the Chromecast with Google TV only has a single USB-C port for power, plugging it into a powered USB-C hub will let you connect other accessories, such as wired game controllers, external storage, or USB-to-ethernet adapters. The Chromecast also supports Bluetooth for connecting wireless game controllers, headphones, or earbuds.

Google isn’t exactly starting from scratch on the software front. The new Chromecast technically runs Android TV, which has been shipping for years on some smart TVs and streaming players. As such, it’s already compatible with more than 6,500 apps and games, including most major streaming services. (There are a few missing apps, though, including Apple TV+, AT&T TV, and a handful of individual TV network apps such as Nick Jr and Discovery Go.)

But what’s really interesting about Chromecast with Google TV is how it pulls together content from across those disparate apps. A row of apps is still available on the home screen—as it should be—but it’s not the focus.

Straight from the home screen, you’ll get recommendations from apps like Netflix, Amazon Prime, Hulu, Disney+, and HBO Max. And by selecting any of these suggestions, you can head straight into a movie or show without having to do any more digging through menus. (The name “Google TV” refers to this universal guide, which exists on top of the Android TV platform.) As you use this menu, Google learns about your preferences and adjusts its recommendations accordingly.

Google TV also lets you set up a universal watchlist, which is an idea that’s been long overdue on streaming devices. Instead of managing separate lists inside multiple apps, you can finally have one list for everything you’ve been meaning to watch. You can even add movies and shows to your list via Google search or the Google TV mobile app, and they’ll be waiting in your watchlist back on the Chromecast.

Google Assistant plays a role in sifting through content as well. By holding the Assistant button on the remote, you can ask for specific shows, actors, or directors, or you can request specific genres such as “action movies from the 80s” or “new comedy shows.” And for any given show, you can view cast and crew information, look up suggestions for similar content, or give a thumbs up or thumbs down to fine-tune Google’s home screen recommendations.

Google isn’t the first company to try building a universal streaming guide, but it’s far more committed to the idea than any of its major rivals. Google TV’s recommendations and watchlist aren’t shunted off to some weird, secondary interface (like they are on Apple TV), and they don’t aggressively favor any particular service (like Amazon’s Fire TV devices do for Prime video).

The resulting experience feels like a revelation. It’s just so much easier to find new things to watch and stay on top of what you’re already watching when you don’t have to navigate through a sea of individual apps.

The problem with building a universal guide—and, perhaps, the reason no one’s attempted it with such gusto before—is that getting it 100-percent right is hard work. That’s evident from the gaps in Google TV’s execution.

Some apps, for instance, don’t integrate with Google’s “Continue watching” row, which lets you pick up where you left off on movies and shows. (It works with Netflix, HBO Max, and CBS All Access, but it doesn’t show content from Amazon Prime, Hulu, or Disney+.) You also can’t use voice commands on a Google Home or Nest Audio speaker to play video from certain apps, such as Amazon Prime and HBO Max, even though those same commands work through the Chromecast remote.

Live TV integration is even patchier. If you’re a YouTube TV subscriber, you’ll see a “Live” section atop the Google TV home screen, with a grid guide showing what’s on TV; but at the moment, no other services feed into this menu. And while you can use voice commands to launch live channels from YouTube TV or Sling TV, you can’t do the same with other live services such as Hulu + Live TV, FuboTV, or Philo.

There are smaller nitpicks as well: For well over a week now, Google’s top teaser row has been insisting that I watch Secret Society of Second-Born Royals, even though I have no interest in doing so, and the “Trending on Google” section of the home screen includes recommendations from apps I haven’t connected to my account. YouTube’s “Recommended videos” are also a mandatory part of the home screen whether you’re interested in them or not.

Some apps, meanwhile, just don’t integrate with Google’s universal guide at all. For Peacock, PBS, Crunchyroll, and pretty much every individual TV network app, you’ll once again be diving in and out of individual apps.

The biggest blind spot of all, though, is support for multiple profiles on Chromecast with Google TV. Given the strong emphasis on personalization, you’d think the ability to switch between Google accounts would be on board from day one.

The underlying Android TV platform still has a few weak points as well, though it feels considerably more polished than it used to.

One longstanding problem is that each app handles playback controls differently. In Netflix, for instance, pressing the remote’s select button pauses the video, and tapping the left or right directional keys backwards or forwards. But in Peacock, pressing any of those keys brings up a playback bar, requiring additional clicks to pause, rewind, or fast forward. There’s a reason Roku, Amazon, and Nvidia all have dedicated playback buttons on their remotes: App makers just can’t be trusted to be consistent. If Google can’t fix this problem in Android TV, it’ll have to fix it in its Chromecast remote.

It’d be nice to see some kind of system for quickly switching between apps as well, akin to how Apple TV and Nvidia’s Shield TV let you double-tap on the remote’s home button for a list of recent apps.

On balance, though, Android TV finally feels like a mature streaming platform. It has a slick design that feels consistent with the rest of Google’s current products, its setup and settings menus are easy to understand, and it’s free of the showstopping bugs that have felled some previous Android TV streamers.

It also just lets you do some really cool stuff, like showing a personal Google Photos album as your screensaver, using your TV as part of a multi-room audio setup, controlling smart home devices via Google Assistant, and even playing classic video game emulators. Even the namesake ability to cast media from a phone or tablet remains a standout feature, even if it’s not the focus anymore.

All of which gives Chromecast with Google TV some unique selling points over other budget 4K streaming players. Roku’s Streaming Stick+ is a better choice if you favor free content or want to stick with an app-centric streaming platform. Amazon’s Fire TV Stick 4K is the clear choice for folks who are all-in on Alexa and Amazon Prime.

But the new Chromecast with Google TV is suddenly a viable alternative to both, especially if you can’t wait to see how streaming ought to be.