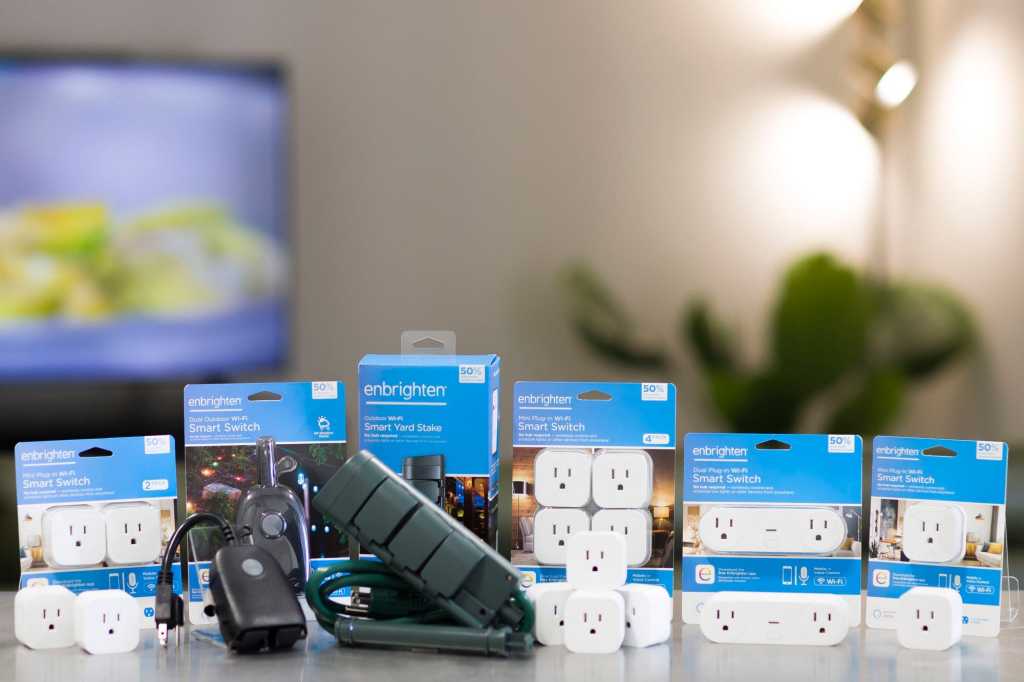 Jasco already offers a raft of both plug-in and in-wall smart lighting products based on Zigbee and Z-Wave, but its expansion into Wi-Fi is currently limited to smart plugs. Among the most interesting of these is the $35 Enbrighten 6-Outlet Wi-Fi Smart Yard Stake. Plug this into an outdoor outlet, stick it in the ground, and you’ll get six grounded outlets that can be scheduled and controlled with Jasco’s app or turned on and off with voice commands spoken to Amazon Alexa or Google Assistant.

The Yard Stake also has a local on/off switch. All six outlets are controlled simultaneously, but this could be a great product for everything from landscape lighting to holiday decorations. The Enbrighten app also lets you establish schedules based on the time of day, sunrise/sunset, countdowns, and even weather conditions.

If six outdoor smart outlets are more than you need, the Enbrighten Wi-Fi 2-Outlet Outdoor Smart Plug costs $10 less than the stake, but offers all the same smart lighting features with two simultaneously controlled grounded outlets.

Moving indoors, Jasco has introduced both single and dual-outlet smart plugs. The Enbrighten Wi-Fi 2-outlet Indoor Smart Plug provides two simultaneously controlled outlets while consuming a single outlet in a duplex. This is an on/off device—it can’t dim a connected lamp—but it can switch small appliances on and off (fans, coffeemakers, and the like). There’s a local button in addition control via the app or with voice control. It’s aggressively priced at $20. The single-outlet Enbrighten Wi-Fi Mini Smart Plug offers the same features—less one outlet—and will cost half as much, $10. It’s worth noting that all the Enbrighten Wi-Fi smart plugs are priced considerably lower than Jasco’s Enbrighten Zigbee and Z-Wave plug-in products.

Finally, Jasco is also introducing a smart surge protector. This device will offer seven grounded outlets, three of which can be controlled via the Enbrighten app over Wi-Fi. Jasco has not yet announced pricing for this last device.

Each of the new Enbrighten Wi-Fi products is limited to connecting a router’s 2.4GHz network, which generally delivers better range but uses spectrum that tends to be much more crowded.

The new product line will be available at Lowes home-improvement stores (in-store and online) as well as Jasco’s online store.