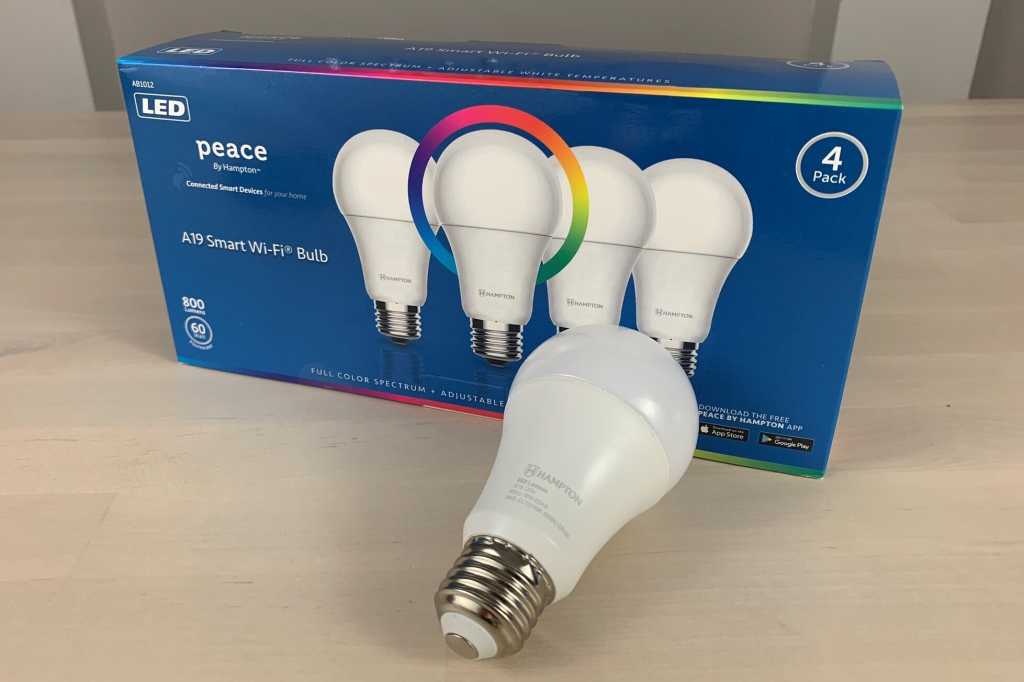 The new A19 color smart bulbs from Hampton Products are reasonably priced, but some key features, such as a vacation mode, are MIA.

This review is part of TechHive’s coverage of the best smart bulbs, where you’ll find reviews of competing products, plus a buyer’s guide to the features you should consider when shopping.

Like other A19 bulbs, the Peace by Hampton Smart Wi-Fi Bulb has an E26 base, which means it will fit in standard light bulb sockets. Rated to last 13.7 years based on three hours of usage a day, the dimmable Peace by Hampton bulb emits up to 800 lumens of light, which is roughly equivalent to a 60-watt incandescent bulb. In my tests, I found the bulb had no trouble lighting up my bedroom, and it could easily illuminate a desk or another type of workspace.

The Peace by Hampton A19 bulb’s white light can be tuned from a warm 2,700 Kelvin to a daylight-equivalent 5,000 Kelvin, and it can also glow in up to 16 million colors.

As you might have guessed from its name, the Peace by Hampton A19 Smart Wi-Fi Bulb connects directly to Wi-Fi networks, which means there’s no need for a hub. Once you download the Peace by Hampton mobile app and register for an account (there’s no Google or Facebook account integration, so you’ll nfeed to enter your email address and create a password), you can get started adding the bulb to the app. 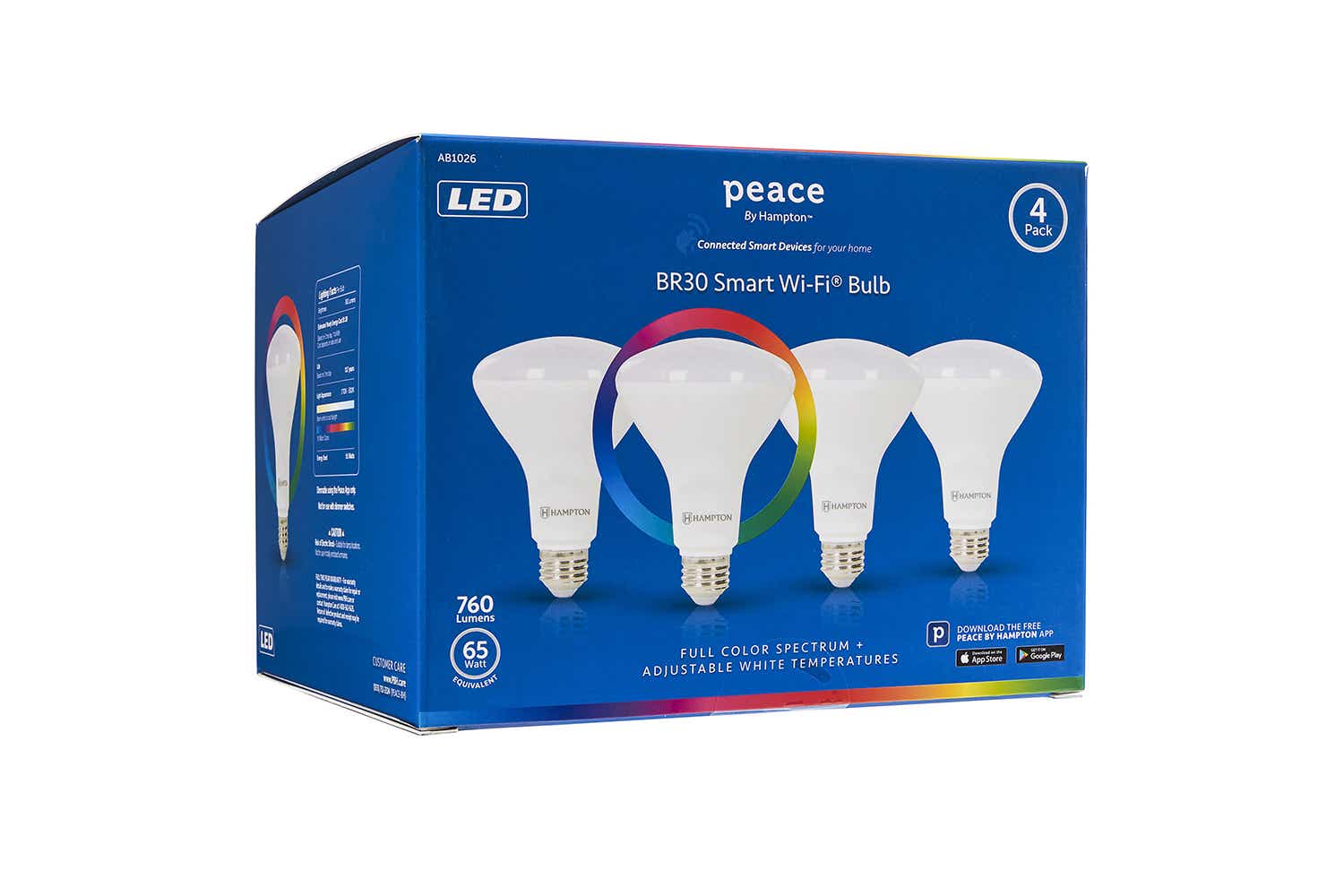 You can either scan for the bulb—or bulbs, given that we’re dealing with a four-pack here—or manually add bulbs one at a time. Like most other Wi-Fi-enabled smart bulbs, the Peace by Hampton A19 bulb only connects to 2.4GHz wireless networks, but after an initial hiccup, I was able to add the bulb to the Peace by Hampton app via the auto-scan method, and without having to temporarily switch my dual-band 2.4GHz/5GHz Wi-Fi router to 2.4GHz-only mode. Once you’ve added your bulbs, you can add them to rooms in your home (Bedroom, Kitchen, Study Room, and so on) as well as create light groups within a room.

Those used to other smart light ecosystems may be surprised to learn that the Peace by Hampton app won’t let you control all the lights in a given room, although you can control all the bulbs in a lighting group; in other words, “rooms” within the app really only exist for organizational purposes. That means you might find yourself creating, say, a “Master Bedroom” light group in your “Master Bedroom” room, an annoying extra step.

Once you’ve added your bulbs to a room and (optionally) grouped them together, you can start controlling them with the Peace by Hampton app. Tapping a bulb or a group takes you to a three-tab interface. The “White” tab lets you pick a white light temperature by swiping a circular palate, while the “Color” tab has a similar palate, along with a color intensity slider. Both the White and Color tabs boast brightness sliders as well. Finally, the “Scene” tab lets you choose from a series of white light and color presets, from “Night” and “Soft” to “Read” and “Working,” while the “Colorful,” “Dazzling,” and “Gorgeous” scenes cycle through colors at various speeds. You can also tap the Edit button to create your own scenes.

The Peace by Hamptons app offers some powerful automation tools. Besides basic daily and weekly schedules, automations can be triggered by whether you’re at home or away, by the status of a device (such as whether a given bulb is on or set to a certain color temperature), sunrise or sunset, or even the local temperature, humidity, weather, or windspeed. Those conditions can trigger a variety of actions, from turning your bulbs on and off and changing their color and brightness to sending mobile notifications and even triggering other automations that you’ve previously created. You can also add delays between actions, if you wish, or you can create “tap-to-run” automations that you can export as Siri Shortcuts.

Powerful though Peace by Hampton’s automation tools may be, they may be intimidating for novice smart home users, and there are some crucial missing features. For example, the app lacks a vacation mode (which turns your lights on and off at random intervals to fool would-be burglars), nor does it offer a sleep/wake feature that gradually dims or brightens your lights at night and in the morning. (One workaround is to create an automation that uses pauses to gradually step the brightness of your bulbs up or down over a given time period, but creating the routine requires a fair amount of patience.)

Luckily, the Peace by Hampton A19 bulbs support both Alexa and Google Assistant (but not HomeKit, despite the Siri Shortcuts compatibility), which means you can control the bulbs with voice commands as well as (easily) create routines for them. And while neither Alexa nor Google Assistant offer randomized vacation modes for lights, Alexa can ramp the brightness of bulbs in routines, while Google Assistant has its Gentle Sleep and Wake feature.

One of the most reasonably priced color-enabled smart bulbs on the market, the Peace by Hampton A19 Smart Wi-Fi bulb gets high marks for its easy setup and impressive automation tools, plus its support for Alexa, Google Assistant, and Siri Shortcuts. The bulb has its drawbacks, including missing vacation and wake up/sleep modes. That said, one of our initial objections—that the bulbs were only available as four-packs—has been erased now that the lights are being sold individually.

Updated on October 30, 2020 to note that the Peace by Hampton A19 multi-color smart bulbs are now being sold individually as well as in four-packs.