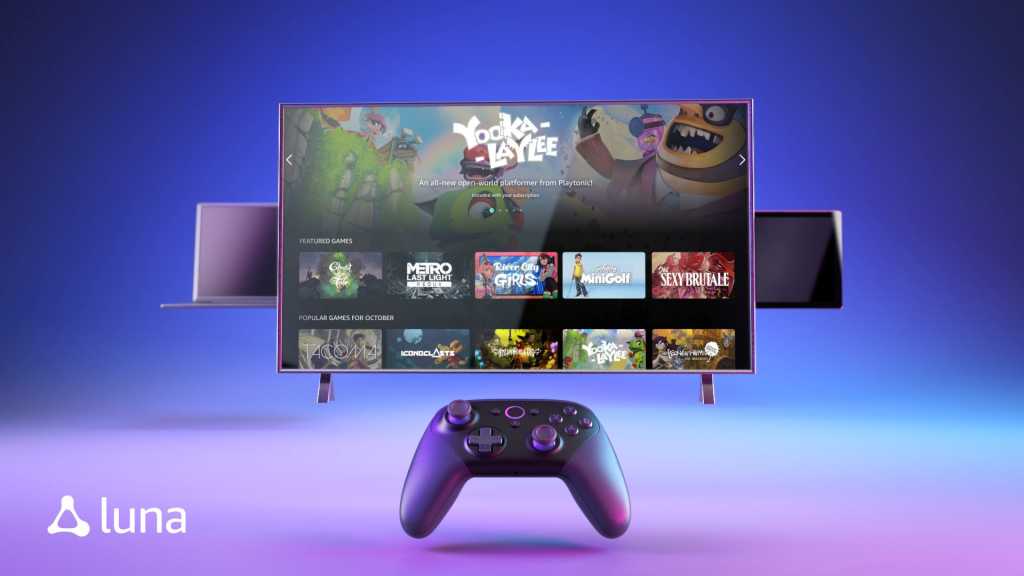 Amazon’s content, however, works on the Netflix model, with the monthly price paying for the service as well as Amazon’s game library, which will include individual games like Resident Evil 7, Control, and Panzer Dragoon; plus, a dedicated channel with Ubisoft that grants access to Assassins Creed Valhalla, Far Cry 6, and Immortals Fenyx Rising the same day they release, Amazon said.  Games with 4K support and 60-frames-per-second refresh rates will be available on “select titles,” Amazon said, probably leaving the remainder at 1080p.

Amazon’s Luna launches alongside a number of other cloud gaming services, from Nvidia’s excellent GeForce Now, Google’s decent Stadia service, Microsoft’s own nearly finished Xbox cloud gaming service (aka xCloud); and Sony’s PlayStation Now. While each has its strengths, the appeal of Luna will probably be Amazon’s enormous purchasing leverage, as well as its deep knowledge of how the cloud works.

We can see that immediately with what Amazon is calling the new Luna Controller, a wireless controller that Amazon says works better when connected directly via Wi-Fi, and not via Bluetooth. This contradicts the usual controller setup, in which a wired or wireless controller connects to a PC or console, which connects in turn to the internet. The Luna Controller uses a technology called Cloud Direct, cutting out the middleman (the console) and accessing Amazon’s cloud servers directly.

Amazon says its Cloud Direct Wi-Fi technology running on its multi-antenna Luna Controller can shave between 17 to 30 milliseconds off the round-trip time between your input and the response from Amazon’s servers, as compared to using Bluetooth. That’s a critical improvement, since the entire premise of cloud gaming is that you don’t need a powerful console running next to you; instead, your inputs on a controller or keyboard are sent to the cloud, processed on a remote server, and the results sent back to you. That network latency, or lag, can be distracting to a fast-paced action game. Amazon’s Luna Controller will also be Alexa-enabled, though it’s unclear how that technology will be used.

As you might expect, Amazon’s Luna service will run on its own Fire TV, as well as PCs, Macs, and via web apps for iPhones and iPad tablets, with Android coming soon, Amazon said. Amazon’s Fire tablets, surprisingly, weren’t mentioned. Subscribers to the Luna+ game channel, the source of Amazon’s gaming content, will be able to play on two devices simultaneously and move from one device to the other.

The Luna service includes a subscription to the Luna+ game channel, which doesn’t have a complete list of the available games. Amazon, however, mentioned that they’ll include “action games like Resident Evil 7, Control, and Panzer Dragoon; adventure games like A Plague Tale: Innocence and The Surge 2; platformers like Yooka-Laylee and The Impossible Lair and Iconoclasts; and fan favorites like GRID, ABZU and Brothers: A Tale of Two Sons.

The Ubisoft channel, with access to the latest Assassins Creed: Valhalla game, plus other Ubisoft titles, will add more titles over time. Google launched Stadia with Assassins Creed: Odyssey, which combines breathtaking vistas with some quick gameplay, to show off its platform; it appears Luna will do the same. “This is the firfst of multiple Luna game channels in development, where customers can play games from their favorite publishers and genres,” Amazon added.

Last but not least, Amazon intends for Luna to integrate with Twitch, its existing and wildly popular streaming service. “Inside the Luna experience, players will see Twitch streams for games in the service, and from Twitch, they’ll be able to instantly start playing Luna games,” Amazon said.