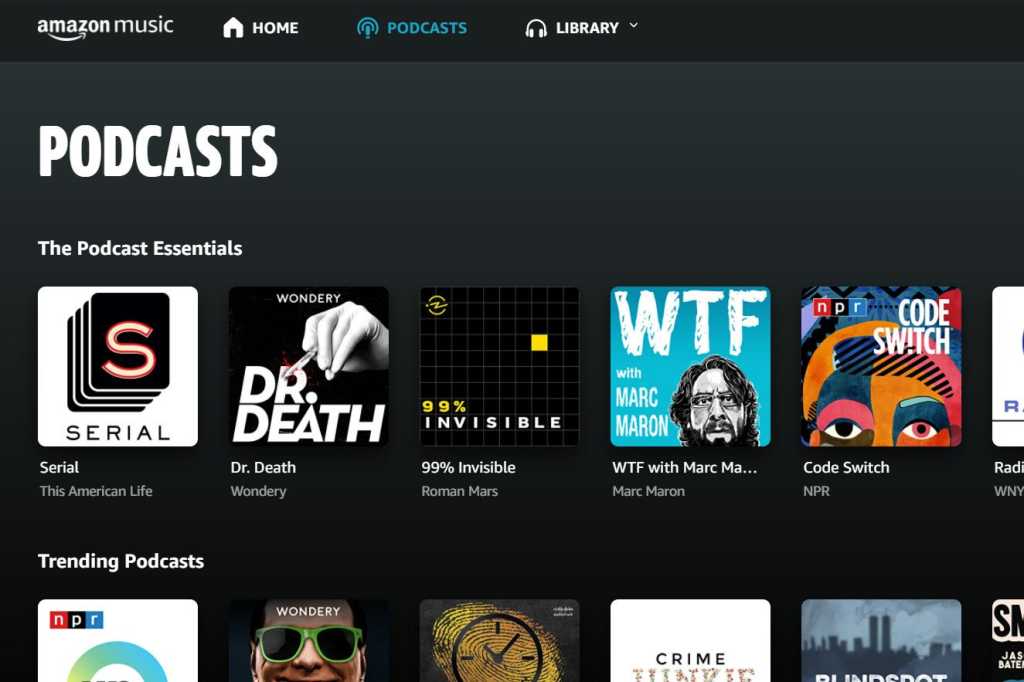 Taking aim at Spotify’s growing podcast empire, Amazon Music just unleashed its own flood of free podcasts, including upcoming and exclusive shows from the likes of DJ Khaled, Becky G, Will Smith, and Dan Patrick.

Amazon Music’s new podcasts arrived today in the U.S., U.K., Germany, and Japan. Amazon Music users on all subscription tiers, including its free service, will be able to play podcasts.

Many of the most popular cross-platform podcasts are now available on Amazon Music, including Crime Junkie, What A Day, Radiolab, Revisionist History, Planet Money, Ear Hustle, Why Won’t You Date Me? With Nicole Byer, and Stuff You Should Know.

But like Spotify, which has spent hundreds of millions for exclusive rights to such popular podcasts as The Joe Rogan Experience and shows from Bill Simmons’ podcast network, The Ringer, Amazon Music is sinking cash into its own exclusive shows.

Among them: Disgraceland, a “music-meets-true-crime” podcast that will detail “some of the craziest criminal stories surrounding some of the most interesting and infamous pop stars.” Disgraceland is slated to debut on Amazon Music next February.

Meanwhile, The First One is a “new audio experience” from DJ Khaled, in which the musician will sit down with his “all-time favorite artists” to discuss “the hits that made them iconic.” The First One is “coming soon” to Amazon Music, according to an Amazon press release.

Other upcoming podcasts exclusive to Amazon Music will be a Dan Patrick-hosted show about Hollywood and the movies, while Jada Pinkett Smith and Will Smith are producing their own Amazon podcast.

Podcasting is just another front in the streaming music wars. Spotify has gone all-in with podcasts, rolling out frequent podcast feature updates while spending $100 million for The Joe Rogan Experience and a whopping $200 million for The Ringer, Bill Simmons’s popular website and podcast network. Spotify also took a shot at YouTube when it rolled out video podcasts earlier this summer.

With its 100 million paid subscribers, Spotify is still the 800-pound gorilla of streaming music, with Apple Music and Amazon running to catch up. That said, Amazon Music is reportedly growing at a faster clip than Spotify, so it’ll be interesting to see if Amazon’s podcasting play can help it close the gap.