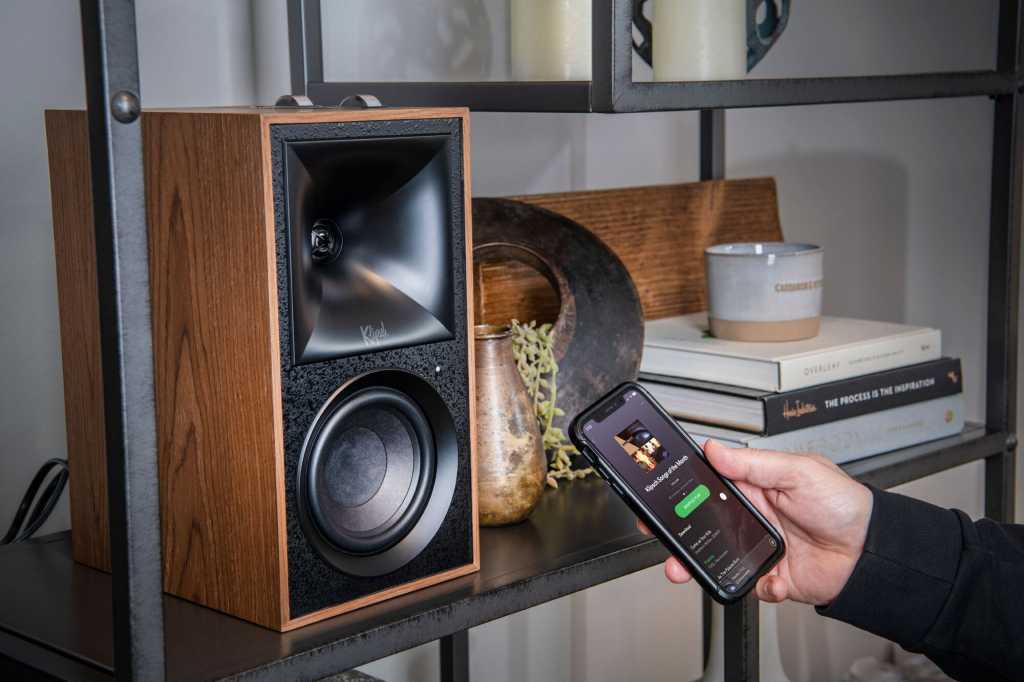 Klipsch
At a Glance

Ever since 1946, when Paul Klipsch began selling his patented Klipschorn speakers, the company that bears his name has been inextricably linked with horn-based designs. As he discovered a decade earlier while comparing horn-loaded and cone-based speakers, horns offer greater efficiency and more controllable dispersion.

Now, almost 75 years later, the company continues to implement that philosophy in a wide range of speakers, including The Fives, a pair of powered, wireless bookshelf speakers that bespeak high quality in their construction and performance.

This review is part of TechHive’s coverage of the best Bluetooth speakers, where you’ll find reviews of competing products, plus a buyer’s guide to the features you should consider when shopping for this type of speaker.

Each 2-way speaker includes a 4.5-inch high-excursion fiber-composite cone woofer, the size of which is close enough to 5 inches to give the speakers their name. A 1-inch titanium LTS (Linear Travel Suspension) vented tweeter with 90 x 90-degree Tractrix horn is derived from the company’s lauded Reference Premiere series. The bass-reflex enclosure has a rear-firing Tractrix port, and it’s constructed from sturdy MDF with genuine wood veneer. Also, the speakers come with a handsome magnetic grille-cloth cover.

The built-in, custom-designed amplifiers provide a total of 160 watts of power (320W peak), with each woofer receiving 60W and each tweeter getting 20W from their own separate amp circuits. The maximum output is specified to be 109dB at a distance of 1 meter from the stereo pair, and frequency response is specified from 50Hz to 25kHz (no tolerance given), with bass extension down to 46Hz at 35 percent volume.

One interesting feature is Dynamic Bass EQ, which is normally found only in A/V receivers. Basically, the level of low frequencies relative to the entire spectrum changes depending on the overall level you set—the lower the overall level, the more the bass is boosted to accommodate how the human hearing system perceives different frequencies at different levels. This feature can be disabled using the included IR remote.

Inputs abound on The Fives, all of which are found on the primary speaker. For wireless connectivity, there’s Bluetooth 5.0 with support for the aptX, aptX HD, AAC, and SBC codecs. In addition, physical digital inputs include optical Toslink, USB-B for connection to a computer, and HDMI ARC for connection to a TV.

To use the ARC connection, you need to connect the TV’s ARC input to The Fives’ HDMI input; as you may know, the TV’s ARC input sends audio data to an external device in addition to accepting video and audio data from a device. In this case, you must connect your source devices to the TV and use it to switch between them, and you can’t use the TV’s HDMI ARC input as an input. If your TV doesn’t have an ARC input, you can use its optical digital-audio output or line-level analog-audio outputs to connect to The Fives. (You can read more about ARC in this story.)

Speaking of which, analog inputs include a 3.5mm stereo analog jack and a phono input with two RCA jacks and a ground terminal; the phono input can also be switched to line level. Rounding out the connections on the back of the primary speaker is an RCA subwoofer output, a USB-A port for servicing, a 4-pin connector that’s used with the included cable to connect to the secondary speaker, and the AC power receptacle. A Bluetooth button lets you pair The Fives to a Bluetooth source.

Using the Klipsch the Fives

The top of the primary speaker offers two knurled knobs that are embedded with only a portion of each one extending above the surface. One selects the source, and the other adjusts the volume. The knobs feel very sturdy and substantial, just like the rest of the speaker.

You can also control The Fives with the included remote, which is small and simple. Along with a power on/off button, it provides a play/pause button, volume up/down, subwoofer volume up/down, mute, and dedicated source-select buttons, along with a Sub Reset button that resets the subwoofer level to its nominal value as well as enabling and disabling Dynamic Bass EQ.

The free Klipsch Connect app for iOS and Android offers another control option for several of the company’s products, including The Fives. But the current version only provides a setup routine, firmware update, and product registration. At first, I didn’t want to register the product since it’s a review sample, but the app wouldn’t go beyond that point without it, so I input my info. The app offers a quick-start guide with videos, which is basically an enhanced version of the printed guide.

As I played with the app, I discovered that the speakers had firmware version 1.5.0 and version 1.5.2 was available, so I performed the update. The download took less than a minute, while the process of updating the speaker took several minutes. This process is far better than downloading the update to a computer, putting it on a USB flash drive, and plugging that into the speaker.

Otherwise, the app isn’t very useful. According to Klipsch, the app will be updated with EQ and other functions later this year.

Performance of the Klipsch the Fives

As usual, I used the Tidal Master library as my source material playing via Bluetooth from my iPhone XS. Also as usual these days, I started with some Jacob Collier—this time, “All I Need” from Djesse Vol. 3. This wonderful track follows the best tradition of Earth, Wind, and Fire updated for the 21st Century. On The Fives, the vocals were super-clean, but the highs were slightly veiled, and the bass was just a bit bloated. Disabling Dynamic Bass EQ helped, but I couldn’t really hear much difference between on and off.

Next up was “Ojos Negros,” a new single by Paula Cendejas and Girl Ultra. This upbeat Latin track has lots of electronics and deep bass, which again was slightly bloated on The Fives. The highs were a bit laid back, but the vocals were smooth and clear.

Another new discovery for me is saxophonist Nubya Garcia. “The Message Continues” from her debut album Source is a basic jazz combo of bass, drums, electric piano, and tenor sax. The bass is quite prominent in the mix, and as before, it was a bit overblown on The Fives. The sax and piano sounded excellent, while the highs in the cymbals were a tad recessed.

Turning to some classic country, I cued up “Devil in a Sleepin’ Bag” by Willie Nelson from his remastered album Shotgun Willie. The Fives sounded smooth if a bit restrained, and as I had come to expect, the bass was a bit overblown. Willie’s voice sounded—well, just like Willie.

For some solo piano, I was surprised to find Chick Corea playing classical literature live in Paris on Chick Corea Plays. I listened to Scriabin’s Prelude #4 from Op. 11, in which Corea injects a jazz interpretation in a few spots. The piano sounded smooth and cohesive, and I didn’t notice any bloat in the bass on this track. The speakers still sounded a bit restrained, though.

Moving on to a larger symphonic sound, I played the finale from Berlioz’ Symphonie Fantastique as performed by the Muncher Philharmoniker under Sergiu Celebidache. As before, The Fives sounded smooth and a bit restrained, especially in the upper frequencies, with no appreciable bass bloat as I had heard on other tracks. In my notes, I wrote that the speakers had a “sophisticated, polite sound.” 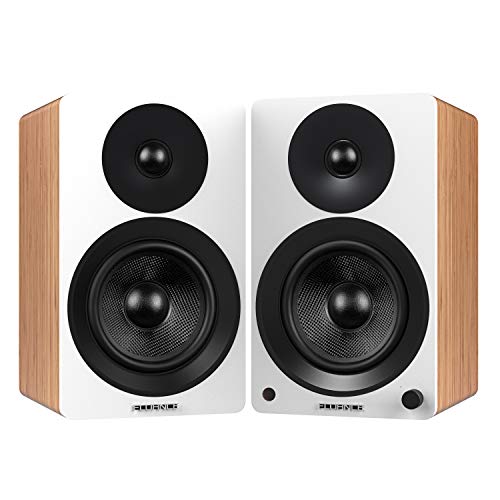 During my listening sessions, I played each track on the Fluance Ai60 wireless bookshelf speakers, reviewed here, in addition The Fives for comparative purposes. The Ai60s have a 1-inch silk-dome tweeter in a shallow waveguide and a 6.5-inch woofer in a sealed cabinet, and they list for $299.99, less than half the list price of The Fives.

I placed The Fives on top of the Ai60s, which worked out well, since the Klipsch speakers are a bit smaller. I set the Ai60s’ EQ to a flat response and disabled The Fives’ Dynamic Bass EQ, which sounded better to my ear. Thanks to Tidal’s user interface, I was able to switch between them seamlessly.

On every track, the Ai60s sounded brighter and more open than The Fives with crisper highs—in some cases, they sounded just a tad overbright in direct comparison with The Fives. For example, on the Scriabin piano piece, they sounded ever-so-slightly strident. Also, the bass was cleaner, better defined, and deeper with no sense of bloating. The deeper bass is completely understandable, since the Ai60s’ low-frequency extension is specified down to 35Hz, while The Fives are spec’d down to 50Hz.

Overall, The Fives sounded smoother and more refined than the Ai60s, though also a bit restrained in the high end with slightly overblown bass. By contrast, the Fluance speakers were brighter and more open with deeper, richer, cleaner bass that was better balanced with the rest of the spectrum. Some might consider the Ai60s to be somewhat brash and splashy, more like ear candy and less sophisticated than The Fives, but this didn’t bother me—in fact, I preferred the sound of the Ai60s overall.

Bottom line on the Klipsch the Fives

The Fives are obviously a high-quality product, derived from more than seven decades of speaker excellence. The sound is smooth, refined, and sophisticated, though it’s tipped slightly toward the bass and away from the mids and highs. And the bass can be a bit overblown.

The wide range of connection options make The Fives well-suited for many applications, including Bluetooth, computer and TV audio, and even direct input from a turntable. And the build quality is top notch.

At $799/pair, The Fives are not cheap. But if your taste tends toward a refined sound, they could be well worth the investment. On the other hand, if you crave more excitement in the sound of your speakers, the Fluance Ai60 is a better choice, and it’s less than half the cost.