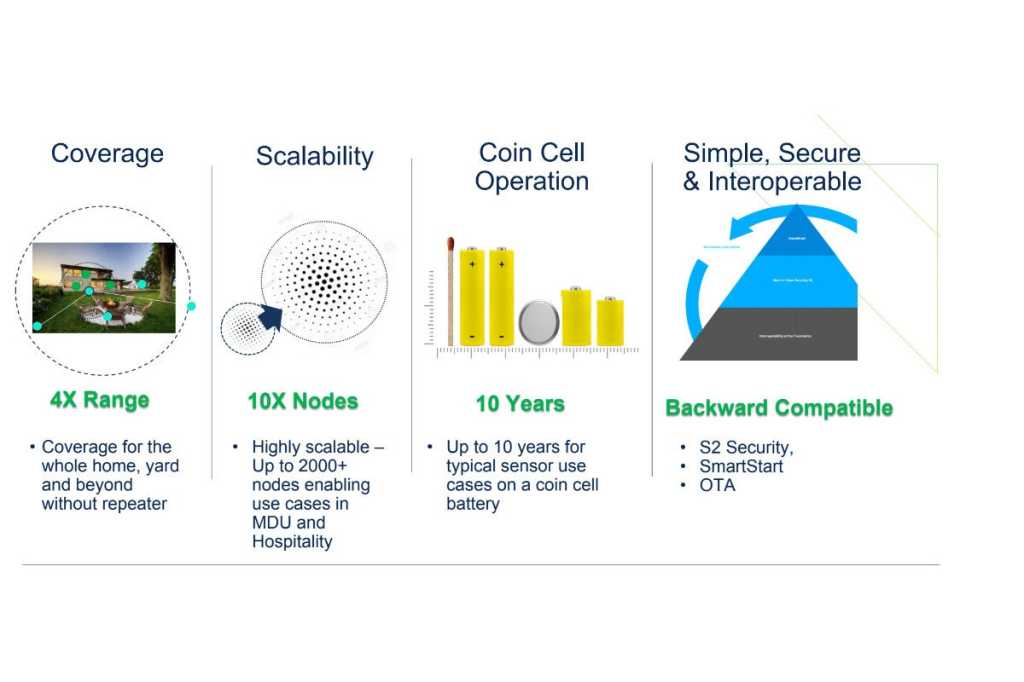 The Z-Wave Alliance has announced a new specification for the Z-Wave wireless smart home protocol that can increase the range at which Z-Wave devices can operate by a factor of four, while increasing the number of devices that can coexist on a Z-Wave network by a factor of 10.

Updated December 17, 2020 to report that the Z-Wave Long Range (Z-Wave LR) specification is now available for product development by members of the Z-Wave Alliance. The Z-Wave certification program will include Z-Wave LR by March, 2020, anticipating product launches throughout the year. Existing devices powered by Z-Wave 700 chips will only need a firmware update to implement this new feature.

Z-Wave competes with Zigbee, Bluetooth, and to a lesser degree Wi-Fi in the smart home market and is widely used in everything from smart lighting controls to door locks and sensors. Already known for its very low power consumption, the Alliance says a new dynamic power control feature of the new Z-Wave LR spec will make the technology even better on that score—to the point a coin-cell battery will be able to power a device like a door/window sensor for as long as 10 years.

Z-Wave technology uses lower-frequency radio spectrum than other wireless networking technologies—908.42MHz in North America, 868.42MHz in Europe—which enables its signals to pass through physical obstacles such as walls more easily. But the increased range Z-Wave LR delivers will make it possible for Z-Wave network traffic to travel even further, extending from the interior of the home into the garage, the yard, and even into outbuildings. And you won’t need to worry about running out of room on your Z-Wave network, because the new spec busts through the current practical limit of 232 nodes to enable more than 2,000 nodes on a single network (the Z-Wave Alliance’s December 17, 2020 announcement now says a single network can handle 4,000 nodes, and that field testing has demonstrated one-mile point-to-point, line-of-sight range).

In a discussion with Z-Wave Alliance executive director Mitch Klein last week, Klein said these achievements were made possible in large measure by the increased memory available in the 700-series Z-Wave chips—the most recent generation—that began shipping in late 2018. The Z-Wave Alliance—which recently transitioned to non-profit status as an independent standards development organization—seeks to “make Z-Wave technology more attractive to the Internet of Things market,” according to Klein. “The Alliance is also looking to move Z-Wave technology into other vertical markets.” Chipmaker Silicon Labs’ decision to fully open Z-Wave technology to other manufacturers should also remove criticism that Z-Wave chips are only available from a single source.

The best news for current Z-Wave technology users is that Z-Wave LR is backward compatible and interoperable with any previously installed Z-Wave device. That’s not to say a Z-Wave sensor built with a pre-700-series Z-Wave chip will suddenly gain a 10-year battery life or deliver four times the range it did previously, but there won’t anything to stop you from keeping those devices on your network if they still meet your needs while adding new products that can deliver those new benefits. You will, however, need a controller powered by at least a Z-Wave 700-series chip to enjoy all the benefits of the new tech.