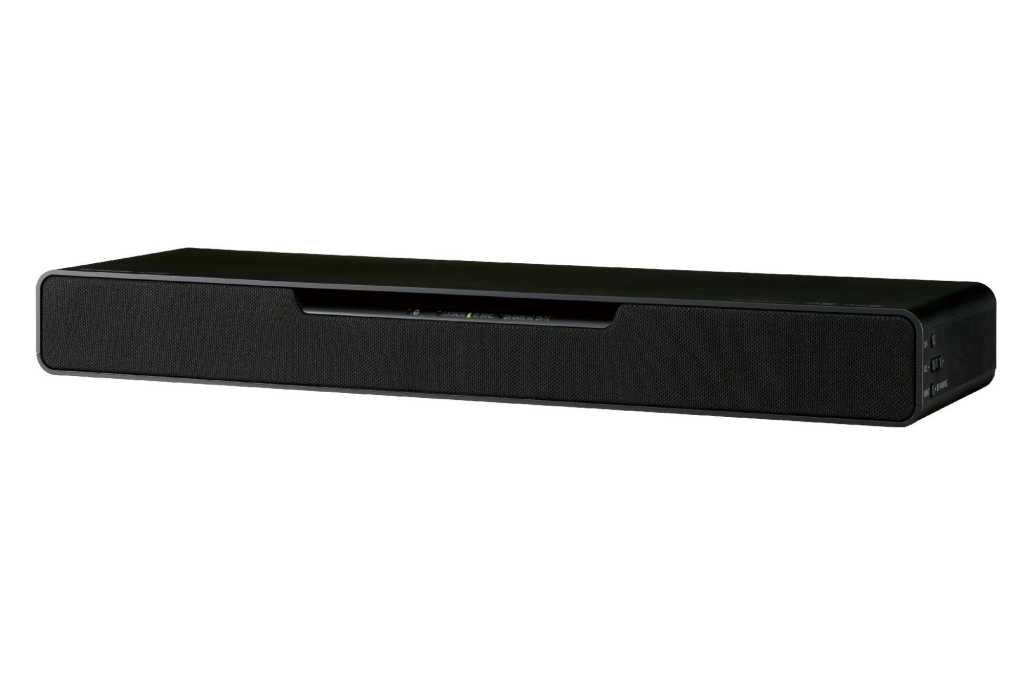 Back when it was first announced at CES in January, Panasonic’s upcoming gaming soundbar had a rather uninspiring name: the SC-HTB01. Today, Panny reveals a more evocative moniker for its compact soundbar—the SoundSlayer—along with a release date.

Slated ship this month for $300, the Dolby Atmos- and DTS:X-enabled SoundSlayer soundbarRemove non-product link was designed in conjunction with Square Enix, the storied game developer behind the Final Fantasy series. Specifically, the SoundSlayer has been optimized for Final Fantasy XIV Online, the popular MMORPG, and “provides an unparalleled audio experience within the world of Hydaelyn,” Panasonic promises.

The 2.1-channel SoundSlayer comes with three gaming-oriented sound modes: Role-Playing Game, a mode specifically optimized for Final Fantasy XIV that’s designed to deliver a “sense of reality and intensity;” First-Person Shooter, a mode that emphasizes “accurate location audio” to help gamers hear “subtle sounds such as footsteps;” and a Voice mode for “adventure” games, in which “clear dialogue can provide important clues,” according to Panasonic.

During an online press event, Panasonic execs said they hoped gamers would see the SoundSlayer as an alternative to using gaming headphones, which can grow uncomfortable during lengthy gaming sessions, while the soundbar’s compact form factor is designed to fit snugly beneath a PC monitor.

Besides its compatibility with such immersive 3D audio formats as Dolby Atmos and DTS:X, the SoundSlater also supports DTS Virtual:X, a virtual sound mode that can upmix 5.1 and even stereo audio sources to virtualized 3D audio. Available in a wide variety of soundbars, DTS Virtual:X can be quite effective in creating virtualized 3D soundscapes without the need for upfiring drivers (which the SoundSlayer lacks), but it can also add an unwelcome harshness to the sound.

Measuring 17 x 2.06 x 5.25 inches and weighing just four pounds, the 80W Panasonic SoundStage comes equipped with a pair of 4.0cm full-range drivers and two 1.4cm tweeters, including one each for the left and right channels.

Instead of a separate wireless subwoofer, the SoundStage boasts a built-in 8cm woofer and a passive radiator for low-frequency effects (the “.1” in the SoundSlayer’s “2.1” configuration).

You can connect the SoundSlayer to your PC’s graphics card via HDMI, with the soundbar’s HDMI input supporting 4K HDR passthrough. The SoundSlayer also has a separate HDMI-ARC port and an optical (Toslink) input, while a USB port is reserved for software updates.

Users can stream audio to the SoundSlayer from their phones via HDMI, and the soundbar also supports high-resolution audio playback.

Preorders for the SoundslayerRemove non-product link are expected to begin today. Stay tuned for a full review one we test out a sample unit.