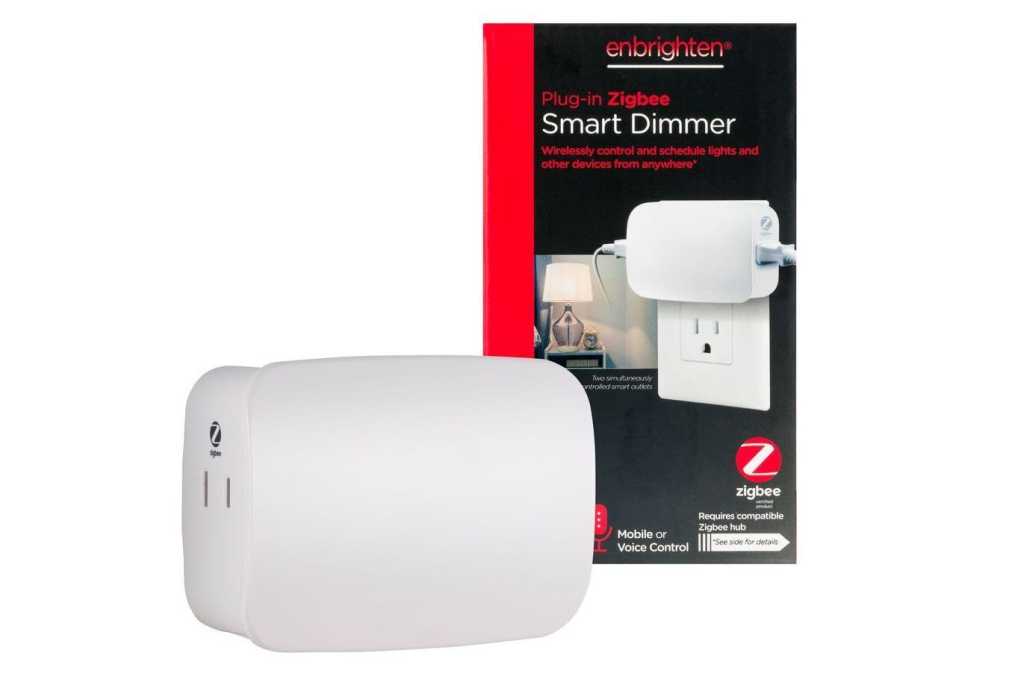 Jasco Products
At a Glance

This Zigbee 3.0-based plug-in dimmer lets you dim up to two lamps without switching to smart bulbs.

Most smart-home owners dim lamps by screwing in smart bulbs, but plugging your lamps into a smart plug that supports dimming is an even easier solution. Plug-in smart dimmers aren’t as ubiquitous as simple on/off smart plugs, but every major electrical manufacturer has one.

This Enbrighten model from Jasco is based on Zigbee technology and so depends on a smart home hub that supports the same. That can be a Samsung SmartThings, a Hubitat Elevation, an Amazon Echo Plus, or a second-generation Echo Show, among others.

As with its in-wall dimmer, however, the Enbrighten plug-in dimmer is not formally certified to work with SmartThings. But that didn’t prevent me from settingt it up that way with no problem. I simply scanned the QR code sticker on the product within the SmartThings app during setup.

The Enbrighten Zigbee Plug-In Smart Dimmer shares the same overstuffed industrial design as Jasco’s Enbrighten Z-Wave Plus smart plug. It’s a fat brick of a device that measures a sizable 4 x 3 inches across its face and which juts out from the wall 1.5 inches. A two-prong receptacle is positioned on each side of the unit, with a single power button positioned on the top. (Both outlets are controlled simultaneously, not independently.) The good news is that, while the dimmer is quite large, it’s designed so that it doesn’t block the second outlet in a receptacle, a common problem with oversized gear like this.

The dimmer is designed only to work with lights—not space heaters or motorized products, such as fans—and it supports a maximum total load of 2.5 amps. That’s the equivalent of 300 watts of incandescent bulbs or 150 watts of LEDs, per the manufacturer. (Any connected light bulbs must, of course, be dimmable for the dimmer to work correctly.)

While dedicated dimming controls are lacking on the device itself, that single button can do the job if you need direct control. A single press turns the attached lamps on or off; press and hold to slowly dim the lights. Press this button 10 times quickly to program the behavior of the onboard LED: always off, on when the load is on, or on when the load is off (nightlight style).

When using the dimmer with SmartThings, I was able to manually turn the lights on or off, dim them with a slider, and set schedules and timers to control the lights automatically. A detailed history tab shows not only when the lights were turned on or off, but what the dimming level was set to—should you need to know that information. I encountered no trouble with the dimmer in several days of testing, and the dimmer was always quite responsive to commands. Speaking of which, the dimmer is compatible with both Amazon Alexa and Google Assistant.

The $40 list price is a bit on the high side, but if your smart home is built around Zigbee, and you want a Zigbee 3.0 device, your options are unfortunately limited. As such, it’s definitely worth considering if the overstuffed design isn’t a turn-off.