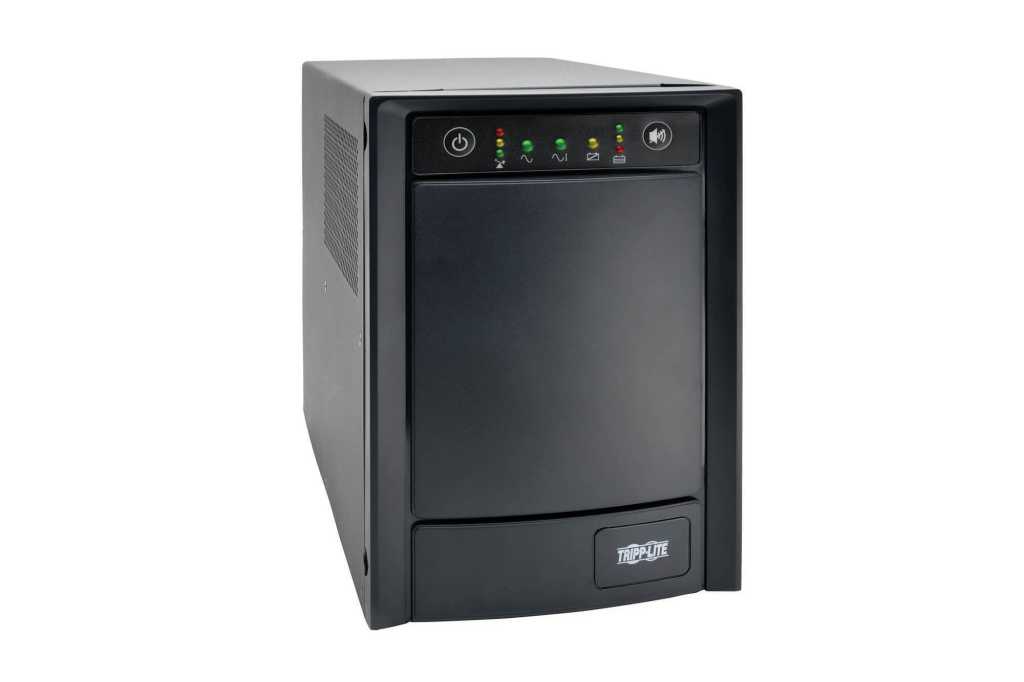 Any computer owner with a high-performance system—particularly in outage-prone areas—will appreciate all the features found in the Tripp Lite SMC1000T. It’s a great investment for equipment longevity.

The Tripp Lite SmartPro SMC1000T packs all the best features needed for high-performance and gaming PCs into one heavy, well-designed uninterruptible power supply (UPS). With the ability to support up to 650 watts of attached gear, that should suffice for nearly the most tricked-out system. If your system adds up to a more modest 325W, the battery-backup and power-conditioning system can run for nearly 15 minutes; even at full load, it can keep devices energized for a whopping five minutes.

Tripp Lite offers management software only for Windows (and it requires Java), but the hardware supports macOS’s built-in UPS tools. Plug in the SMC1000T via USB, and with either the Windows software or using macOS’s Energy Saver preference pane, you can configure under what terms you want your device to shift into automatic shutdown: run for a certain amount of time or until the battery depletes to a certain level, and then kick in.

This review is part of TechHive’s coverage of the best uninterruptible power supplies, where you’ll find reviews of competing products, plus a buyer’s guide to the features you should consider when shopping.

For an average computer system that draws 200 to 400W in an area with frequent brief outages lasting up to minutes, the SMC1000T can keep you in full operation across that time. (Look up the specs on devices or at manufacturers’ sites for all the equipment you want to connect to the battery-backed outlets and add their wattage together to get a maximum load factor.)

While this model isn’t aimed at low-power-consumption network gear and the price tag might dissuade you, it could power a Wi-Fi base station and broadband modem for two to four hours, depending on the devices’ specs, which might be worth the price in avoiding lost work.

This Tripp Lite unit has two features that modern PCs users will find somewhere between very useful and almost mandatory. It’s a line-interactive UPS with pure sine wave output. While those options may sound jargony, they have a direct impact on the life of the UPS and potentially on the longevity of your computer’s power supply.

A line-interactive UPS conditions all the power that passes through it on route to devices plugged into its outlets. (The SMC1000T has two surge-protector outlets; the other six outlets have both surge protection and power backup.) Internal circuitry lets the UPS perform a number of power adjustments for power sags and overages, among other glitches, without tapping into the battery at all, which increases the battery’s lifetime. Surge-protection components shed transient high voltages. The battery gets used only when power dips too low or rises too high for adjustment or stops flowing altogether.

Because the UPS is always managing power flow, the switchover in an outage is rated at 4 milliseconds by Tripp Lite, typically well within tolerances required to keep computer gear running without a hiccup. Standby UPSes take longer, from 5 to 25ms depending on the model and the particular kind of outage factors, which might not keep a device operating while the battery kicks in.

The pure sine wave output lets the UPS exactly simulate the clean up and down cyclical waveform of normal electrical system alternating current (AC) power. Some UPS models produce a simulated sine wave, instead. The simulation is chunky, moving from voltage range to voltage range in big steps, and costs less than pure sine wave technology, so it’s often found in cheaper models.

A chunky sine wave isn’t a problem for older computers and a variety of not-very-sensitive equipment, like many kinds of networking hardware. For modern computers with active power factor correction (PFC), however, which allows them to function at a variety of voltages, it’s a real issue. A stepped sine wave fed into an active PFC power supply can cause a high-pitched whine and prematurely wear its components or even cause it to fail.

With expensive PCs, sensitive audio gear, or any equipment that needs precision, a pure sine wave is worth the extra price, particularly if you think you might have recurring sustained outages that could last tens of seconds or into minutes. While a power-supply failure isn’t certain, it’s possible, and that would result in computer downtime and even component damage.

Tripp Lite also includes a site-wiring fault LED on the back of the unit that illuminates for a number of serious problems, such as a faulty ground or an overloaded neutral. If you were to buy this unit and that yellow light turns on when it’s plugged in, disconnect it and call an electrician immediately.

The SMC1000T has a few drawbacks. It relies on a series of tiny printed graphics and LEDs to indicate status, which require consulting the included manual to decode. Given its weight—36 pounds—it’s likely to be placed on the floor, so you might need a magnifying tool on your smartphone and its flashlight to understand which LED is lit under which icon.

For instance, the green, yellow, and red Outlet Load Level LEDs light up corresponding to light load (green), which is within specs; medium (yellow), which is also within specs but closer to the maximum; or overload (red), which is overload and devices should be powered down and unplugged immediately—an audible alarm sounds, too. (An alarm also goes off when power is out or if the battery is nearly depleted.)

The SMC1000T will fully deplete its battery if there’s an outage and an electrical draw continues from attached equipment, and then automatically begin recharging when utility power returns. It will reset itself when its battery is fully discharged, though, so even if there’s utility power, it doesn’t pass electricity through to connected devices. You must manually press and hold the Standby button to re-enable power passthrough.

Because of the size of the battery and heat dissipation required, the UPS has a variable-speed fan of the size typically seen on tower PCs, and it runs continuously. I found it quiet in normal operation. (Beware a number of online reviews that seem to be of this desktop-style model that mention a loud fan: the reviews include features not present in the SMC1000T, but rather in a rack-mounted version with a similar product ID, and I expect those reviews are attached to the wrong device.)

The outlets are also spaced relatively tightly in the back. This model isn’t meant for wall warts, but for standard polarized 2-prong and grounded 3-prong plugs (in the NEMA 5-15P style).

Tripp Lite doesn’t include warranty information in the box, but it does include a registration card that lets you extend the included two-year warranty against manufacturing defects to three years, and which has links to the full warranty and insurance information.

An insurance policy covers the UPS if operated within specs as well as any correctly attached gear up to $250,000—only replacement or repair is covered, so the dollar amount is largely extraneous. Only the original purchaser is covered, and a warranty claim must be filed within 30 days of purchase.

If you have a mid- to high-wattage computer, display, and peripheral system that you want to offer the highest protection to with a desktop-oriented UPS, the SMC1000T offers nearly every feature you could want, and all of the important ones. With the right kind of power conditioning, pure sine wave output, and long battery runtime, this Tripp Lite model could help you significantly in a region with recurring outages or irregular power.