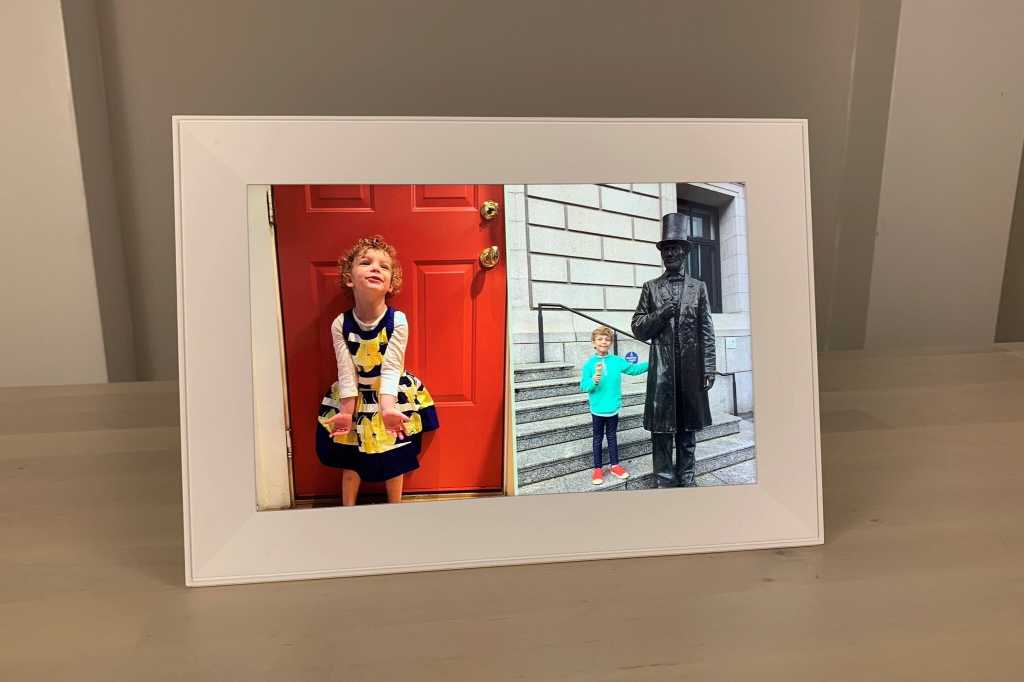 Provided you’re fine with the Wi-Fi and (free) cloud storage requirements, the sturdy and attractive Aura Carver makes for a simple, elegant, and affordable way of displaying your photo collection.

A smart, elegant digital photo frame that you can set up and enjoy within minutes, the Aura Carver makes for an easy and handsome way to show off your snapshots, provided you have a steady Wi-Fi connection and you’re comfortable with cloud storage.

This sturdy, $200 photo frame comes with a bright, vivid screen; a landscape-only design; and an AI-powered photo-pairing feature for displaying portrait photos side-by-side. But the lack of user-accessible local storage means that photos must be stored in Aura’s cloud servers, a requirement that raises privacy concerns (cloud storage is free and unlimited, at least), while the frame’s support for voice assistants is perfunctory at best.

Like Aura’s other frames, the $299 SawyerRemove non-product link and the $399 SmithRemove non-product link, the Carver isn’t wall-mountable; instead, it’s designed specifically to sit on a table, a shelf, or another flat surface. Unlike Aura’s other two frames, the Carver has a landscape-only orientation, while the Sawyer and Smith frames has a swiveling stand that allows you to switch from landscape to portrait modes.

Measuring 10.63 x 2.6 x 7.45 inches and available in charcoal and “white chalk” flavors, the Aura Carver weighs nearly two pounds, which gives the frame a reassuringly sturdy heft. The frame itself has a minimalist yet elegant look, while the solid, wedge-shaped base is deep enough to keep the unit upright and free from wobbles. The Carver comes with a detachable braided power cord, although the boxy wall wart (about 1.6 x 1.6 inches) will block the lower socket of a two-plug wall outlet.

The Carver’s 10.1-inch IPS display has a 1920 x 1200 resolution, which comes out to 224 pixels per inch. Looking closely, I couldn’t detect any pixelation or screen-door effect. Colors looked vivid yet natural, and viewing angles were excellent (as is the case with most IPS panels), with the screen barely dimming while I was looking from the side or above. 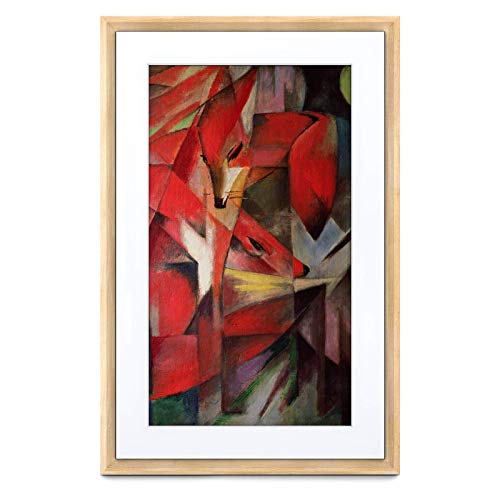 A (barely visible) sensor in the top-left corner of the frame measures ambient light and adjusts the screen brightness accordingly, or turns the display off altogether when the room goes dark (which, during my testing, the sensor did quite reliably). You can also put the display on a daily schedule, although you can’t set different wake/sleep times for weekends or specific days of the week.

To get started with the Carver, you’ll first need to install the Aura app for either iOS or Android, and you’ll need to set up an account (that includes creating a user name and a password, meaning you can’t just sign in via Google, Facebook, or Apple).

Once that’s done, you pair the app with the frame by tapping in the four-digit code that appears on the frame’s display, after which the app connects the frame to your Wi-Fi network (there was no need to enter my network password, at least not with the iOS version of the Aura app). While the Carver only supports 2.4GHz Wi-Fi networks, the frame had no trouble connecting to my dual-band 2.4GHz/5GHz mesh network.

After you’ve named the Carver and decided whether to invite family members or friends who can view and add images to the frame, it’s time to start adding photos. The easiest way is to pick and choose photo albums on your phone, but you can also sync the Carner with albums in your iCloud Photo Library or Google Photos account (but not Facebook, unfortunately), as well as upload images from your Mac or PC using Aura’s Web Uploader tool. If you choose to upload iCloud or Google photo albums, any subsequent photos you add to those albums will automatically be added to the frame.

All your images are stored on Aura’s cloud server, which is powered by Amazon Web Services and protected by AES-256 encryption. In its privacy policy, Aura promises that only you and those you choose to share the frame with will have access to your photos, although Aura says it will analyze your snapshots in order to do a better job of grouping them together (more about that in a moment) while skipping duplicates and fuzzy images.

Unfortunately, the Carver doesn’t come with any user-accessible internal storage or memory card slots (the Carver’s local storage is intended only for image caching), which means any photos you want to display on the frame must be uploaded first, and it rules out pre-loading the Carver with photos and sending it to a friend or relative who lacks—or refuses to get (I’m looking at you, Bubbe)—Wi-Fi. It also means that those who are squeamish about uploading their personal photos to a third-party cloud server (an entirely reasonably attitude) would be better off consider an alternative digital photo frame with local storage options.

Back on the plus side, you can upload an unlimited number of photos to Aura’s cloud server for free. That’s no small thing given the pricey subscription plans that other digital photo frames come saddled with.

Once you have your photos synced to the Carver (the process can be a lengthy one, depending on how many images you upload—and my iPhone got pretty hot during all that uploading), your snapshots will start appearing on the display, and you’ll quickly see one of the innovations that comes with the Carver: Aura’s new “Intelligent Pairing” mode.

An antidote to displaying single portrait photos with big black borders in a landscape-oriented frame, the AI-powered Intelligent Pairing mode uses (according to Aura) a “sophisticated algorithm” to pair “related” photos and display them side-by-side. The whole “Intelligent Pairing” conceit isn’t a new one as far as digital photo frames is concerned—the Google Nest Hub Max, which doubles as a photo frame, does much the same thing—but it is new for the Aura line, and for now it only works on the Carver frame.

I found that Intelligent Pairing (which you can disable, although I’m not sure why you’d want to) did a pretty nice job of picking photos that complemented each other, although it probably helped that I only uploaded albums with family photos (as I suspect most other users will), which means pretty much everyone in each photo was related in some way. Mostly, I was just happy to see that portrait photos were always displayed side-by-side rather than by themselves with distractingly ugly black borders.

You can set the interval between photos to be anywhere between 15 seconds to four hours, or you can manually switch to the next picture (or pictures, in the case of a pair of portrait photos), by swiping a touch-sensitive strip along the top of the frame.

You can also single-tap the touch strip to see more information about the photo, such as where and when it was taken, along with who shared it to the frame. Touching and holding the strip lets you delete a photo, which you can only do after you’ve confirmed it with an additional swipe. While the touch strip gestures are relatively intuitive, the strip itself could be quite finicky about registering touches and swipes, and I often found myself having to repeat gestures more than once.

Besides the touch strip, you can also control the Aura Carver with voice commands via Alexa or Google Assistant, although the process is too clunky to be of much use. With both Alexa and Google Assistant, you must first open the Aura Frames skill (“Alexa, open Aura Frames”) before issuing any commands, and in both cases the list of available commands (“show me the next photo,” “where was that photo taken”) is pretty basic. In most cases, you’re better off simply using the touch strip rather than asking Alexa or Google Assistant for help.

Provided you’re fine with the Wi-Fi and (free) cloud storage requirements, the sturdy and attractive Aura Carver makes for a simple, practically plug-and-play way of displaying your photo collection, while its AI-powered photo-pairing abilities means you’ll never see ugly black bars letterboxing your portrait images. That said, we do wish the Carver’s touch strip was a bit more forgiving, and we would have preferred more advanced and easier-to-use voice assistant support.