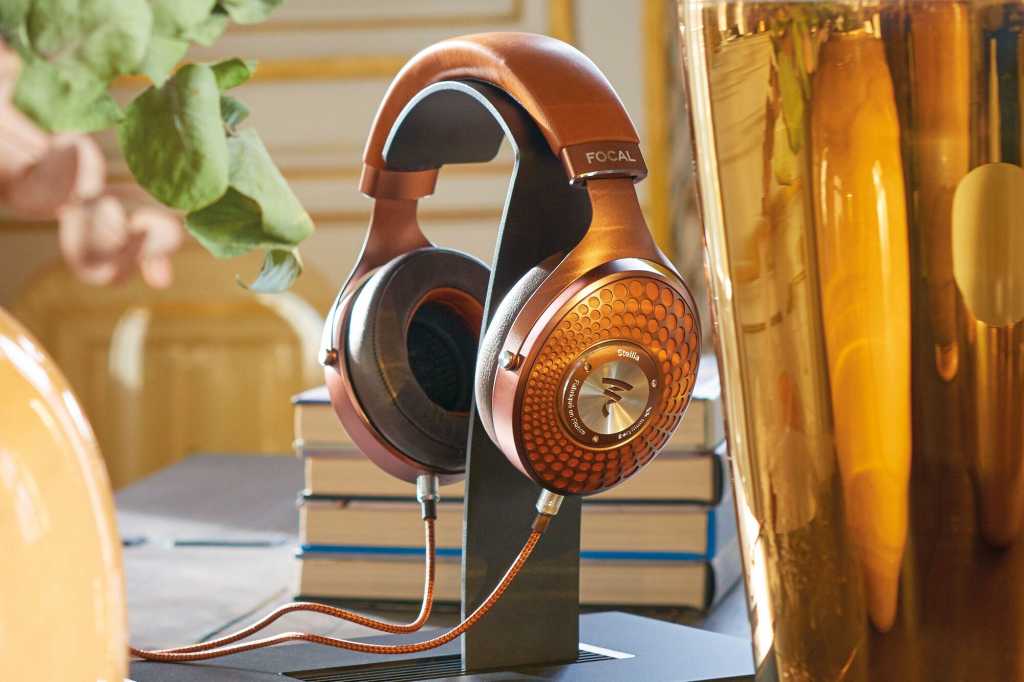 This headphone offers stunningly gorgeous sound and ultimate comfort for a princely sum.

French high-end brand Focal is relatively new to the headphone game—its first model was introduced in 2012—but the company has more than 40 years of experience designing audiophile speakers and drivers, so it’s no surprise that Focal headphones are among the most highly regarded in the world. TechHive has reviewed two—the Clear and the Elegia—deeming both to be exceptional, though not inexpensive by any means.

The latest addition to Focal’s stable of headphones is the Stellia. Given what I’ve heard from the company’s headphones in the past, I was eager to give this one a long listen—and I was not disappointed!

The Focal Stellia is a circumaural (around-the-ear) closed-back design that connects to the source device with actual wires—no Bluetooth here! In fact, the Stellia comes with two hefty cables: a 3-meter (10-foot) cable with XLR connector intended for home use with an amplifier such as the Focal Arche (review forthcoming) and a 1.2-meter (3-foot) cable with a 3.5 mm connector for mobile devices. Also included is a 1/4-inch adaptor that screws onto the 3.5mm plug, which is more secure than a snap-on design. At first, I thought the XLR cable facilitated a balanced connection, but it doesn’t; the connectors for each earpiece have only two conductors (signal and ground), so the connection is not balanced.

The headband and earpiece yoke mechanisms are derived from the company’s Utopia headphone, a flagship, open-back model introduced in 2016. The consistent curve between these elements is said to offer superior comfort regardless of the shape and size of the listener’s head. In addition, the earpads consist of high-resilience memory foam that, along with the headband, is covered with full-grain leather.

Of course, the earcups are designed for more than comfort; they provide excellent isolation from ambient sound and an acoustic environment specifically designed for the full-range drivers. In fact, the earcups include two vents: one to control the balance between the bass and midrange and the other to evacuate the rear wave from the center of the motor to avoid compression and extend the low-frequency response—in other words, this is a bass-reflex headphone! At the other end of the sonic spectrum, EVA (ethylene-vinyl acetate) foam behind the drivers absorbs excess high-frequency energy. Finally, acoustic diffusers break up any standing waves and make the earcups more rigid and inert.

The full-range drivers themselves are equally well-designed. The 40mm diaphragm is a pure-beryllium dome with very low mass, high rigidity, and high damping. The cross section of the diaphragm resembles the letter “M,” which is said to offer even higher rigidity for more precision and less distortion. Also, the Focal-exclusive frameless pure-copper voice coil reduces the mass even further. The result is a frequency response from 5Hz to 40kHz (±3 dB) with a THD of 0.1% @ 1 kHz/100 dB SPL and a sensitivity of 106 dB SPL/1 mW @ 1 kHz. The impedance is 35 ohms, making the Stellia relatively easy to drive.

I don’t normally comment on a product’s packaging, but I will in this case—it’s as high-end as the Stellia itself. A large, sturdy box includes the headphone in its rigid, woven-cover case along with separate case for the cables. Even the documentation, sparse as it is, comes in its own leather folder.

At first, I couldn’t find any indication of which sides of the Stellia are left and right, but I finally found small labels on the bottom of each earcup near the cable connector. The cables for each side are marked as well.

The oversized earpads easily fit over my relatively large ears, and they are supremely comfortable. They don’t clamp down on the head, yet they provide excellent isolation from ambient noise. I could easily spend hours wearing the Stellia—and I did! As usual, I listened to tracks from Tidal’s Master high-res audio library playing from my iPhone XS through an iFi hip-dac, reviewed here.

One of my favorite recording artists these days is young Jacob Collier, who is rightly hailed as a Millennial Mozart. His genre isn’t classical music, but rather an eclectic mix of jazz, rock, and pop that goes far beyond all three. For this review, I listened to his version of Lionel Richie’s “All Night Long” from the album Djesse Vol. 1. The clarity was amazing, with exceptional delineation of instruments and vocals, allowing me to hear well into the mix even as it remained entirely cohesive. The bass was deep but well balanced with the rest of the sonic spectrum, and the vocals were beautifully rendered.

Next up was some modern country from Rascal Flatts—specifically, “Feel It In The Morning” from How They Remember You. The mix is rich and dense, yet I could distinguish each element perfectly clearly. Everything was superbly balanced, and the bass was deep and clean. Also, the soundstage was wide with excellent imaging of each instrument and voice.

As I was looking around the Tidal Master Library, I happened to listen to “Hallelujah!” from Creeper’s new album Sex, Death, and the Infinite Void. It’s a 45-second intro to the album with recorded rainfall and thunder with some low synth sounds and spoken words, all of which sounded wonderful; the rainfall and thunder were especially effective, encompassing a wide soundstage. When the first song started, I discovered it was quite thrashy and punk-like, so I quickly stopped it—not my cup o’ tea!

Another new discovery was “Running Away” by Omar Rodriguez-López from The Clouds Hill Tapes, Pt. III. This track opens with vocal chords and adds super-low synth bass, lead female vocal, piano, and other synth sounds. I was especially impressed with the synth bass, which was super-clean and perfectly balanced with the rest of the mix, and the piano was beautifully rendered.

Turning to some jazz, I listened to “How High The Moon” as sung by Patti Austin with Afro Blue and the Count Basie Orchestra on Ella 100: Live at the Apollo. Patti was definitely channeling Ella Fitzgerald, and the Stellia highlighted her vocal skills perfectly. Again, the clarity and presence of the entire sound was startling, and a wide soundstage spread out the band and background vocals in front of me. I would bet the sound I heard was better than actually being there.

One of my favorite artists from the 1980s is guitarist Pat Metheny, and one of my favorite Metheny albums is First Circle, which was remastered in 2020. I listened to “Forward March,” a short intro to the album that starts with a deep bass drum and a terrible, out-of-tune marching band. It almost hurts to listen to this cacophony, but it’s hilarious at the same time, and on the Stellia, I could hear each cracked note and inaccurate entrance all too clearly. After a couple of minutes, the music transitions to “Yolanda, You Learn,” a hard-driving jazz/rock track with synth guitar, drums, bass, and some vocals, all of which were super-clear, distinct, and well-balanced.

For a taste of classical, I found a beautiful version of the second movement from Dvorak’s Symphony No. 9, “New World,” arranged by Tamas Batiashvili to feature Lisa Batiashvili (relation unknown) on solo violin with Rundfunk-Sinfonieorchester Berlin under the direction of Nikoloz Rachveli on the album City Lights. On the Stellia, the violin sounded beautifully natural with gorgeous high harmonics, and the orchestra was exceptionally rendered with perfect balance between the rich basses and the rest of the sections, which I could discern perfectly.

I also wanted to try something from Tidal’s 360 Reality Audio library, which offers headphone-based immersive audio using Sony’s technology of the same name. I reviewed the technology here. For this review, I listened to “Tambo in 7/4” by Airto Moreira, remastered from his 2011 album Fingers. The Stellia rendered an excellent immersive soundstage with instruments all around and appearing to be outside the confines of the headphone, though there wasn’t much overhead.

The Focal Stellia is the finest headphone I’ve ever heard, with exceptional clarity, superb soundstage and imaging, and an exceedingly well-balanced presentation of deep bass, clean mids, and sparkling highs. Even better, it’s super-comfortable to wear for extended periods, which I happily did. 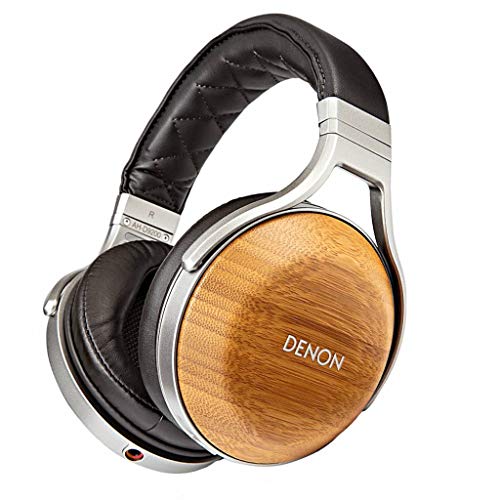 Of course, that level of performance comes at a high cost—nearly $3,000 in this case. But that price tag is entirely justified; not only is the performance second to none, Focal used the highest quality materials in the construction and even in the packaging. The company touts it as a headphone you can take with you when you’re out and about, but at that price, I wouldn’t risk it.

Other than the high price tag, the only con I see is the lack of a balanced connection. I don’t consider this to be a big drawback, but some headphone aficionados might, especially for that kind of money. Theoretically, a balanced connection can increase an amplifier’s voltage-swing range while reducing THD (total harmonic distortion) and crosstalk, supposedly resulting in more refined detail and tighter low bass among other benefits. But you need a balanced amplifier and cable as well as the appropriate internal wiring within the headphone. Perhaps most importantly, any improvement to the Stellia’s sound quality would be marginal at best; I can’t imagine it sounding noticeably better than it already does.

If you’re thinking about investing in the Stellia and a good headphone amp, Focal is offering a package deal with its Arche DAC/amp, which sells for $2,490 by itself. But you can buy them together on Amazon  for a total of $4,000, which saves you $1,480 off the combined individual prices. I’ll be reviewing the Arche in the next couple of months, so stay tuned for that. Incidentally, if you already own a Focal Stellia, Utopia, or Clear headphone, Focal will send you a $1,000 voucher toward the purchase of the Arche. You’ll find the details here.

Meanwhile, I’ll be listening to the Focal Stellia as much as I can, basking in its magnificence.