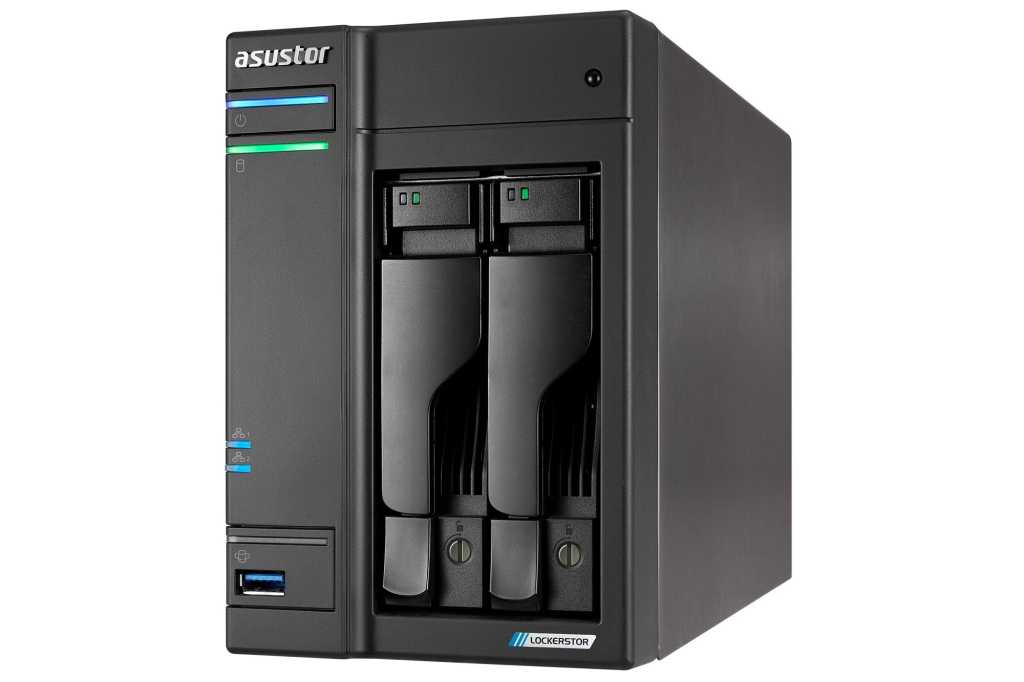 Asustor
At a Glance

The AS6602T is very fast, looks good, and has all the features you could ask for—including 2.5GbE and NVMe caching. The latter, however, didn’t perform as expected with large data sets which, makes the price tag a bit steep.

Asustor’s NAS-box offerings continue to impress, with the $399, two-bay, AS6602T (LockerStor 2) being the latest to come through the lab. It sports a more business-like look than the recently reviewed AS5202T (Nimbustor 2), and it adds M.2 NVMe slots for caching SSDs to the mix.

It’s the same high-quality, 2.5GbE product as its cousin at its core, but NVMe caching is expensive overkill for the home environment.

At first glance, I was far more impressed with the the business-like styling of the AS6202T than the “gamer-oriented” look of the AS5202T. The front is still black, but with a matte finish, and the all-metal shell is pewter. It reminds me of QNAP back in the day, but with more sculpting and defntely more style. It’s a very impressive-looking box.

What’s inside is equally impressive. There’s 4GB of DDR4-2400 memory and a latest- gen Intel Celeron J4125 CPU running at 2GHz. There’s a second SODIMM slot if you want to expand the memory to 8GB. And to jump the gun on the performance discussion, an investment in additional memory versus NVMe might deliver a better return than for most users.

The two 3.5-inch bays feature push-button release and are combo metal/plastic rather than the pure plastic that most boxes this price use. There are no quick-change rails, but I’ll take the small hassle of screws if it means metal over lastic.

The front of the AS6602T hosts the power button, a single 5Gbps Type-A USB port, and the typical power and drive status/activity LEDs. On the back, are two 2.5GbE (RJ45) ethernet ports that can be aggregated for better performance. There are also two additional 5Gbps Type-A USB ports, an HDMI 2.0a output, a Kensington lock port, and a barrel-shaped power jack.

As with the recently reviewed Synology DS720+, the AS6602T has two M.2/NVMe slots for SSDs. Unlike the easy-access panels on Synology’s box, the AS6602T requires that you remove the shell and a PCIe adapter card to install them. The Synology approach takes less than a minute, the Asustor 5 to 10 minutes. That’s not really a big deal since installing SSDs is likely to be a one-time operation—if you do it at all—but it’s worth mentioning.

This review is part of TechHive’s coverage of the best NAS boxes for media streaming and client backup, where you’ll find reviews of competing products, plus a buyer’s guide to the features you should consider when shopping for this type of product.

Asustor calls its Linux-based windows-in-a-browser operating system Asustor Data Master, and while it’s not quite as mature as those delivered by QNAP and Synology, it’s darn close—and getting closer. 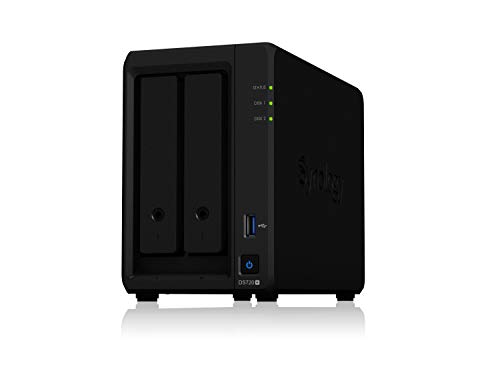 In addition to FTP backup, there’s sync with online services, SMB, Rsync, and so on. Asustor also provides EZ Sync clients for major operating systems and smartphones, so you can also keep your mobile data backed up.

The Asus Portal app is required to output video to a TV or computer display attached to the AS6602T’s HDMI port. Once Portal is installed (select it during setup), you can stream, browse the web, and play movies from the box directly to said display. Resolutions up to 4K UHD (3840 x 2160) are supported.

ADM makes link aggregation/trunking of the two 2.5GbE ports super simple and, unlike with many other boxes, no special switch or router is required if you use round-robin mode. That’s unique in my experience. All told, I’d say QNAP (QTS) and Synology (DSM) should be looking over their shoulders. ADM is a worthy rival.

Simply with SSDs or hard drives and the included 4GB of memory, the AS6602T is an excellent performer. The NVMe caching definitely improves small file write performance when large data sets or heavy usage is involved, but that’s not something most home users or even power users typically experience.

Below are the sequential throughput numbers from NAS Tester 1.7 (8GB single files), a test that’s proven more reliable recently than others for measuring sequential throughput. As you can see, SSDs (in the main bays) are fastest, followed by a bare 14TB WD Gold hard disk drive (240MBps), then the same HDD with NVMe caching. The extra step of caching will reduce write speeds slightly with the AS6602T’s 2.5GbE connection. This would not be the case with a faster 10GbE connection.

Caching reads of any type is far less effective than caching writes, as the drive must still seek for the data. Only with multiple requests for the same data will read caching have a positive effect. CrystalDiskMark 7 uses random reads, so those results show little to no improvement with NVMe caching over bare drive reads.

All writes are cached, on the other hand, so those will show the effectiveness of the cache. Remember that NAS boxes already use part of their onboard memory for caching, likely a gigabyte or two on a box such as the AS6602T, with 4GB on board. That will effect the results with smaller data sets.

Because of that, I ran CDM 7 with the SSDs, bare HDD, and the HDD with NVMe caching 1GB, 4GB, 8GB, 16GB, 32GB, and 64GB data sets. DRAM caching is no doubt helping the 1GB through 8GB tests somewhat, but the NMVe caching does seem to help after that quite a bit. There’s a major drop-off in cache performance somewhere between the 32GB and 64GB marks.

That’s good, but given that the NVMe SSDs I used are capable of 2TBps transfer rates, I was expecting more. How Asustor is implementing the caching no doubt has a great effect, but I was not privy to their methods.

For clarity’s sake, NVMe caching for hard drives, or even SATA SSDs is a well-known storage strategy than can increase performance greatly with high-end equipment or very heavy workload. But it’s a very expensive option for smaller NAS under typical end-user or small-office loads. To be fair, Asustor markets this box to power users and the SMB (small to medium-sized busness) market.

It’s a great box, but will you benefit?

The AS6602T is a great NAS box A bit old-school in design, but by that I mean super-solid metal construction and quality where it counts. Throw in the dual 2.5GbE, plus the healthy app environment and HDMI output and you have a winner. Indeed, all things being equal, I’d keep this in the rack over the AS5202T.

But things are not equal for the end-user. The AS6602T costs $100 more, and once you add NVMe SSDs, you’re talking a delta of at least $225. Given the minimal gain in performance, the cheaper AS5202T is a far, far better deal. Indeed, even power and workgroup users might be better off with a cheaper box with more memory rather than NVMe—depending on workload of course.