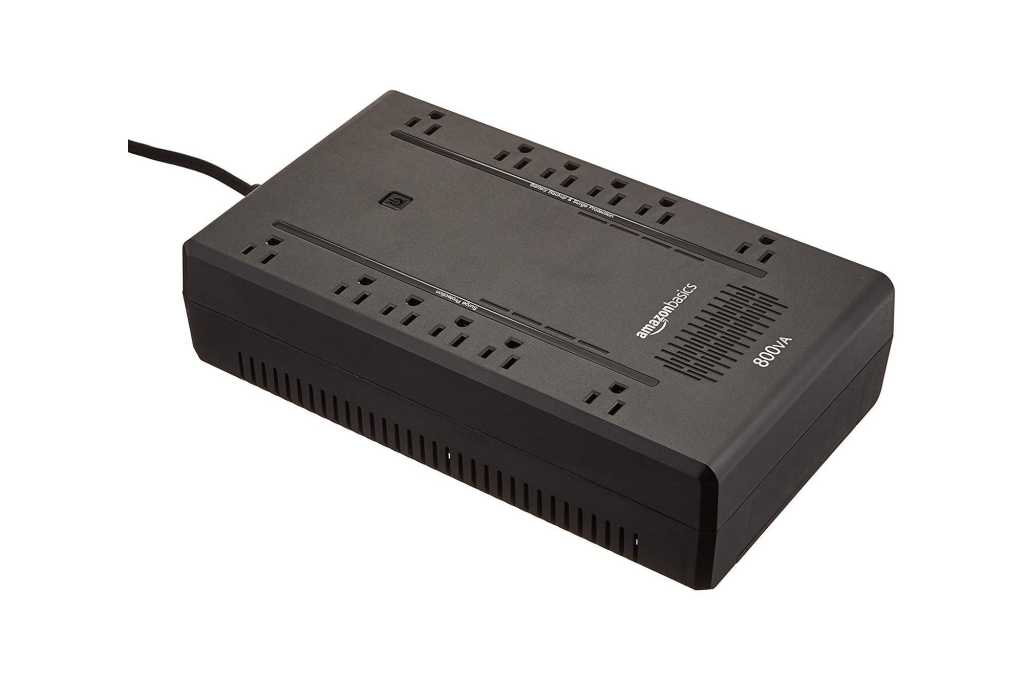 AmazonBasics
At a Glance

This AmazonBasics uninterruptible power supply provides just enough power for a short period to shut down a computer automatically, but it’s outmatched by other options.

The AmazonBasics 12-outlet uninterruptible power supply (UPS) supports up to a rated 450 watts of attached equipment, which it can provide with enough battery power to run a tower computer system, monitor, and peripherals for about 3 to 10 minutes. This delay lets a computer shut down automatically using built-in features in the operating systems or software provided for macOS and Windows if electrical power isn’t restored quickly enough.

For a mid-range computer system that consumes about 200 watts, the estimated 10 minutes of runtime at that load is more than enough. For a more power-intensive system with a pull of 400 watts, the roughly three minutes of battery runtime might not provide enough time to complete a full shutdown. Above 400 watts, you need to find a high-capability UPS that can handle the electrical load under normal operation. (Look up the specs on devices or at manufacturers’ sites for all the equipment you want to connect to the battery-backed outlets, and add their wattage together to get a maximum load factor.)

This review is part of TechHive’s coverage of the best uninterruptible power supplies, where you’ll find reviews of competing products, plus a buyer’s guide to the features you should consider when shopping.

Amazon offers a wide array of products in its AmazonBasics line-up that trade a non-Amazon brand-name manufacturer label on the box for ostensibly a lower price for something of high quality. In this case, however, the promise falls short. While the unit works as expected, it isn’t price competitive with brand names that offer more: more features, more power, and a longer warranty. At its introduction, the UPS was nearly $30 cheaper and competitors in the same class were were $10 to $20 more.

It also has one flaw that may be a non-starter for some buyers: if the battery runs out entirely during an outage, the UPS won’t restart itself once AC power begins to flow again. This isn’t exclusive to Amazon’s UPS, but it’s another determining factor in making a purchase.

Provides the basics for blips and outages

This is a standby UPS, which kicks in battery power as it’s needed, including when line voltage slumps (a “brownout”) and to provide juice during an outage (a “blackout”). It also includes protection against short leaps in voltage in the same manner as a standalone surge protector.

This kind of UPS is cheaper than a line-interactive model, which conditions power continuously, including removing surges, without leaning on the battery. A standby unit should have the advantage of lower cost and works just fine in most normal conditions, even though it takes longer to kick in power than a line-interactive UPS. If you have frequent power issues and short outages, a line-interactive model is a must and worth the additional cost. (In some online certification filings, Amazon describes this model as line interactive, but all of its marketing and the included manual indicate it’s a standby unit.)

Amazon equips the UPS with 12 outlets, six of which are connected to both surge protection and backup power, while the other six provide just surge protection. This is typical for UPSes, allowing you to get two kinds of benefits in one model.

The outlet pattern is a little close together if you have several devices that rely on the wall-wart style of AC adapter. The UPS has outlets spaced 2.25 inches apart at either end of both six-outlet rows, and four in the middle spaced 1.25 inches apart. Outlets are spaced correctly for standard 2-prong and 3-prong cords used in electronics.

Simplicity is the watchword on this model, which has a single button on the top to power the unit on and off, and also to manage alarm-sound settings. Its LED lights up green in normal use and flashes (along with beeps) when it’s in battery mode and when its battery is about to be depleted.

This Amazon model produces a simulated, “stepped” or chunky sine wave for alternating-current (AC) power output, instead of the smooth sine wave that comes out of a wall socket—and which can be produced by more expensive UPS models. A simulated sine wave can interact poorly with computers that use modern power supplies with active power factor correction (PFC), potentially causing a high-pitched whine and premature wear on components. For voltage correction and short periods of time, it’s not likely to cause a problem. But if you have expensive hardware or experience frequent power sags and short outages, pick a pure sine wave UPS, often a feature of line-interactive UPSes.

Connect the UPS to a Mac or Windows PC using an included USB cable (Type A on the computer side), and you can use features either in the operating system or via included software to monitor UPS status and set an automatic shutdown procedure.

The software Amazon offers provides additional statistics and other controls. While Amazon product reviewers said the software allows tuning certain low-level electrical features, that wasn’t present in the latest release. The software isn’t mentioned in the included manual, and must be downloaded from the UPS product page at Amazon, where the link for macOS and Windows versions are in small type.

The power-equipment manufacturer CyberPower manufactures this AmazonBasics UPS and makes the accompanying software, based on online filings and the copyright notice in the software. Bafflingly for a major equipment maker, the macOS version of the software isn’t a “signed” release. Try to launch the software and macOS warns you that it’s from an “unidentifeid developer” and won’t proceed.

The developer failed to go through a very low bar to be part of Apple’s developer program (a whopping $99 per year) and run the software through a digital signing process that makes it resistant to acting as a Trojan horse, among other malware potential. Regular users will find the warning perplexing, and not know a special sequence of steps that allow the software to be installed.

While the AmazonBasics model works with Windows and macOS power-management features, an extra feature of the custom software is that it lets you directly configure audio settings for when the UPS beeps or produces a continuous sound. Only some of those options can be accessed through the device’s power button. (A more up-to-date version of the software directly from CyberPower offers more features and appears to work fully compatibly.)

We were unable to determine the level of surge protection built into the UPS and whether it stops power from flowing once its protective components are worn out. That protection may never get worn through; it depends on the quality of power provided by the local utility and other factors. Some surge protectors and standby UPSes opt to allow power to keep flowing—but they have a “protected” LED that extinguishes when that happens. (Amazon didn’t respond to a question and electrical certifications filed by the company didn’t provide an answer, either.)

Amazon offers a fairly paltry one-year limited warranty that includes repair or replacement of the device for manufacturing defects, and repair or replacement of up to $75,000 of properly connected covered electronics if damage occurs while the UPS is appropriately connected to power. Owners have 30 days to file from an incident. The warranty details are not included with the product, but only available as a download from the Amazon product page.

At the price Amazon offers the AmazonBasics 12-output, 450W UPS, you should instead consider a competing product from the white-label manufacturer who produced this model for Amazon: CyberPower. The CyberPower EC850LD costs about the same at $78.95. It has 12 outlets, spaced identically to the AmazonBasics unit, and offers a 510W battery instead of a 450W one.

The CyberPower model has an LCD display for easy-to-read charge and other power information, a 3-year/$100,000 limited warranty (though with more stringent terms for attached gear), and an “Eco” mode that can be enabled to power off peripherals when the UPS detects a connected computer is shut down. It does have the same restriction on auto-restarting if its battery is fully depleted. CyberPower includes a later version of its UPS management software, but it also suffers from not being a properly signed app in its macOS version.

While there’s nothing particularly wrong with the AmazonBasics 12-output 450W Standby UPS, it doesn’t offer enough of a bargain, feature set, or even warranty to recommend it against other models in its class.