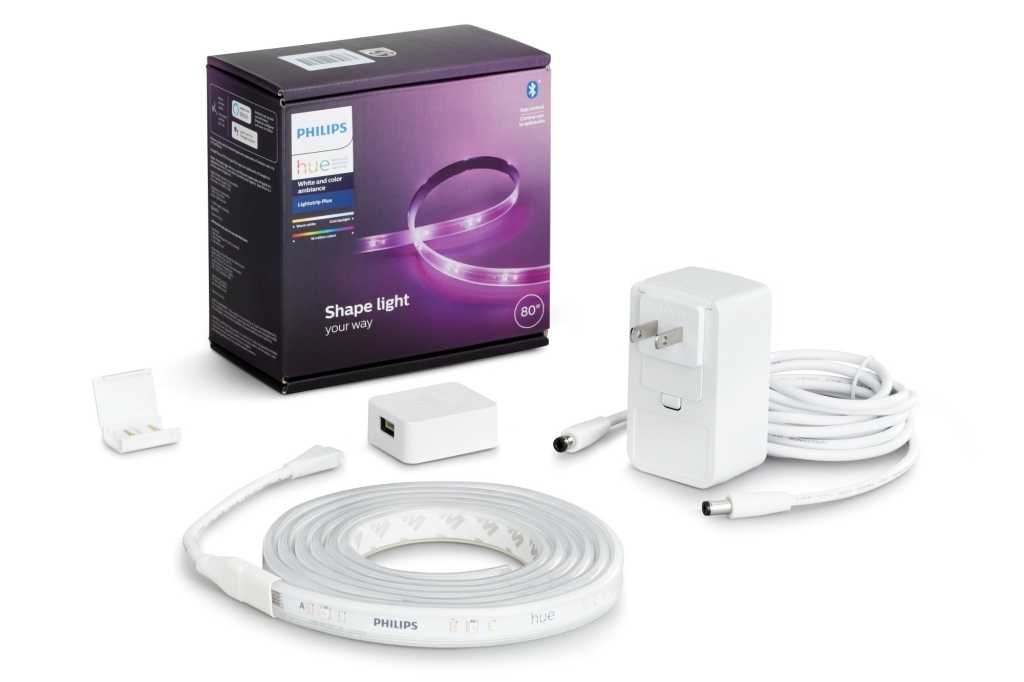 Philips Hue
At a Glance

The Philips Hue Lightstrip Plus makes for a great and easy way to add accent lighting to kitchen counters, stairways, and other indoor areas, but the failure of an initial test unit gives us pause.

Easy to install and packed with the grouping, scheduling, and automated control functionality we’ve come to expect from Hue lighting products, the revamped Lightstrip Plus from Signify-owned Philips Hue makes for an easy, effective way to add accent lighting to kitchen counters, stairways, home theaters, and other indoor spaces.

Following in the footsteps of its more recent smart bulbs and lamps, the new Lightstrip Plus arrives with support for both Bluetooth and Zigbee, meaning that those new to the Hue ecosystem can give the 80-inch light strip a try without investing in a Hue Bridge (with one of the trade-offs being able to operate a maximum of 10 Hue bulbs in your home via Bluetooth).

By their very nature, though, LED light strips are delicate creatures, and lo and behold, an initial Lightstrip Plus test unit failed shortly after we began testing it. A replacement held up well, but we still have questions about the Lightstrip Plus’s reliability.

This review is part of TechHive’s coverage of the best smart light bulbs, where you’ll find reviews of competing products, plus a buyer’s guide to the features you should consider when shopping.

Rated to last for 25,000 hours and 50,000 on/off cycles, the new Lightstrip Plus emits an impressive 1,600 lumens, same as its predecessor. That’s more than enough to light up a workspace, and indeed, the strip had no trouble brightly illuminating my kitchen counter.

The light strip’s white light can be tuned from a very warm 2,000 Kelvin to 6,500 Kelvin, the equivalent of midday sunlight on a hazy day. The strip’s LEDs can also glow in 16 million colors.

The light strip itself is about 0.57 inches wide and 0.22 inches tall, and it has a peel-and-stick adhesive backing. At one end of the strip is a six-inch integrated cord that snaps into a small module with its own adhesive backing. The module, in turn, connects to a roughly seven foot-long power cord that terminates in a chunky wall wart, which (unfortunately) is large enough to block the outlet beneath it. The other end of the strip has a (delicate-looking) six-pin connector for attaching one or more 40-inch Lightstrip Plus extensions.

The actual installation involves little more than peeling off the plastic film that protects the Lightstrip Plus’s adhesive backing and sticking the strip to a smooth, flat surface. You can bend the light strip around corners, provided that the location of the bend isn’t near an LED. If the Lightstrip Plus is too short for your needs, you can connect one or more 40-inch extensions, which can be daisy-chained for a maximum length of 33 feet. You can also cut the strip to fit, but you can only snip along one of several designated lines along the strip, which are roughly a foot apart.

That brings us to one of the innovations of the new Bluetooth-enabled Lightstrip Plus: the ability to reuse snipped-off portions of the strip. (It’s also possible, as dozens of YouTube videos attest, to reuse cut segments of older Lightstrip Plus models, but only unofficially.) You can reconnect two snipped light strip ends using a small plastic bracket that snaps tightly shut (only one is included in the Lightstrip Plus base package). I tried it myself and yes, it works, but I’m told that the light-strip connector only works with segments of the new Lightstrip Plus, and not earlier versions.

The menu of available features for the Philips Hue Lightstrip depends on whether you opt for Bluetooth or Hue Bridge control.

Controlling a Hue light with the Hue Bluetooth app used to be limited to turning it on and off and changing its brightness and color temperature, but a recent update added a few more options, including the ability to set one-time wake and sleep routines (which gradually ramp or dim the light at a certain time), as well as a timer that can make the light turn on, off, or pulse after a set interval. The Bluetooth app can also connect your Hue lights to Alexa or Google Assistant (but not HomeKit, which relies on the Hue Bridge) for voice control.

Despite its recent improvements, the Hue Bluetooth app can still only control a total of 10 Hue lights, and it lacks the ability to group bulbs into separate rooms or put them on schedules or into more elaborate routines. You’ll also need to be in Bluetooth range (about 30 feet or so) to control your Hue lights, including the Lightstrip Plus.

Luckily, you can always expand your Hue control options by adding a Hue BridgeRemove non-product link (about $60 on its own, although they’re routinely included in bundles of Hue lights and accessories). The Hue Bluetooth app can step you through the transfer process, which involves little more than pressing the circular button on the bridge and waiting a minute or so for the bridge to discover the light strip.

Once the Hue Lightstrip Plus is connected to the bridge, you’ll have many more options, starting with the ability to control the light strip from anywhere in the world with an internet connection. A bridge also allows you to control up to 50 Hue lights, as well as group them into rooms and zones, create more elaborate routines (including geofenced “home” and “away” modes), and set custom schedules (either for specific times or at sunrise or sunset). You’ll also be able to sync the light strip with your TV using the Philips Hue Play HDMI Sync Box, an increasingly popular option that adds nifty light effects to movies and TV shows. Last but not least, a Hue Bridge is required for Apple HomeKit control and support for Siri voice commands.

One feature that’s oddly missing from the Philips Hue Lightstrip Plus is the ability to pick animated lighting modes, as you can with competing LED light strips. Indeed, the only way to make the Lightstrip Plus pulse at all is by setting a clinking timer or connecting the strip to the Hue Play HDMI Sync Box.

The Philips Hue Lightstrip Plus performed flawlessly during the majority of my testing—that is, except for when our initial sample unit failed completely.

First, let’s cover the good stuff. Generally speaking, the Lightstrip Plus responded to my commands quickly over both Bluetooth and Hue Bridge control, and as I previously mentioned, the 1,600-lumen light strip easily lit my kitchen counter. I had no trouble grouping the light strip with the other Hue bulbs in my kitchen, and I controlled them all using a Hue dimmer switch. I even set up an Alexa routine that turned off all my kitchen lights, including the Lightswitch Plus, if my kitchen motion detector didn’t detect any movement for 30 minutes.

So far, so good, but the trouble arose when I temporarily disconnected the six-inch cable at the end of the light strip from the small power module with the adhesive backing. When I plugged the delicate six-pin connector (the pins themselves are in the module, with matching holes on the rectangular connector attached to the light strip cable), the Lightstrip Plus refused to turn back on, and indeed it never came on again. Did I damage the connector when I yanked it out of the module? Possibly, although I don’t think I pulled it that hard.

In any case, Signify sent me a replacement (I sent the damaged light strip back to Hue HQ, and I’ll update this review if their engineers manage to pinpoint the problem), and the new light strip has worked without a hitch. A Signify spokesperson told me that the company has not received any similar complaints about the Lightstrip Plus, so perhaps the failure of our first light strip was a fluke. It’s worth noting that the Lightstrip Plus does come with a two-year warranty (remember to keep your receipt); still, it’s concerning that our initial Lightstrip Plus test unit failed within just a couple weeks of use.

If you’re in the market for a smart, bright, and easy-to-install LED light strip to add accent lighting to your kitchen, hallways, or other indoor areas of your home, the Philips Hue Lightstrip Plus is probably the best way to go. We’re fans of its extensive selection of smart control and automation features, particularly when paired to the Hue Bridge, while newcomers to the Hue ecosystem can opt to skip the bridge (which they can always add later) thanks to the light strip’s Bluetooth support. The failure of our initial test unit does give us pause, however, although Signify’s two-year warranty does give us some level of comfort.