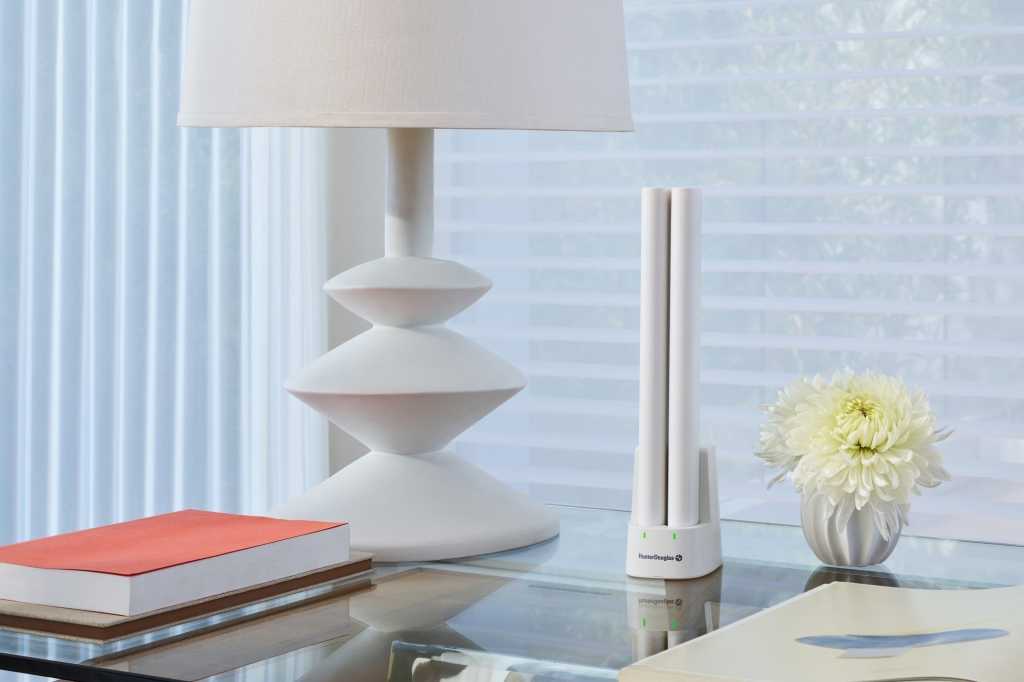 Motorized window coverings are the ultimate fashion statement in a modern smart home, but motors need power. That has always meant some form of wiring (an electrical cord or, in the case of the PowerShades product line, an ethernet cable for power-over-ethernet) or environmentally hostile disposable batteries. Hunter Douglas now has a new solution for any of the shades in its PowerView product line: A rechargeable battery wand that’s available for both new installations or as a retrofit to existing ones.

This two-piece solution consists of a battery dock that mounts behind the headrail (replacing whatever power source was there originally, in the case of a retrofit) and a 12-inch-long Li-Ion battery that magnetically attaches to the dock.

Hunter Douglas spokesperson Scott Stephenson tells me swapping out a drained battery for a fresh one is a simple matter of reaching behind the headrail. The battery should last a full year, according to Stephenson, a metric based on two operation cycles per day (e.g., opening in the morning and closing at night). The user is notified via email or the Hunter Douglas PowerView app when the battery needs to be replaced.

PowerView motorization starts at $299 per shade (depending on the style of the shade or blind: roller, honeycomb, wood, vertical, etc.), and the PowerView hub that serves as a bridge to your Wi-Fi network for all your shades costs $285. A rechargeable battery wand and dock adds another $65 per shade, while spare batteries that guarantee uninterrupted operation of the shades cost $70 each.

A single battery can be recharged in place using an AC adapter and a cord, a process that takes about three hours, or you can buy a dual-battery charging dock that will recharge two batteries at once for $95. The charging dock option will be particularly useful in homes with motorized shades on more than a couple windows.

Hunter Douglas PowerView shades can be incorporated in a broad range of both DIY and professionally installed smart home systems, ranging from Logitech Harmony Home to Control4, Crestron, Savant, and more. The PowerView system is also compatible with Amazon Alexa, Google Assistant, and Siri (by way of Apple HomeKit).