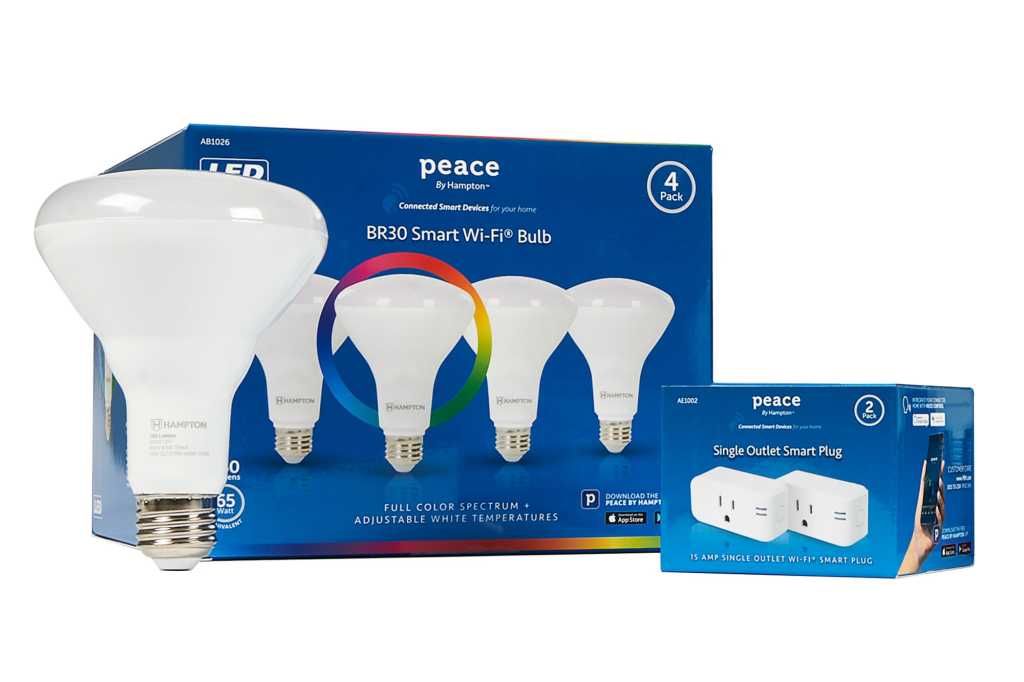 Hampton Products announced a host of new smart home devices at CES in January, and now it’s diving deeper into the space with a new line of indoor LED smart bulbs, smart plugs, and a mobile app to tie them together. Everything will connect directly to your home’s Wi-Fi network, so there won’t be any need for a smart home hub.

The bulbs will produce your choice of white light or 16 million shades of RGB light, with their white color temperatures tunable from a warm 2700K to a cool 5000K. They’ll be available in two form factors: Conventional A19 bulbs that produce 800 lumens of brightness and sell for a very reasonable $15 each, and BR30 lamps that produce 760 lumens of brightness for recessed lighting going for just $16.25 each. But there’s a small catch: It seems you’ll only be able to buy the bulbs in four packs at $60 and $65 respectively.

The smart bulbs will be joined by a new Peace by Hampton 15-amp smart plug. This is a single-outlet device that can switch a device such as a lamp on and off. The smart plug doesn’t have a dimming feature, but its $9.50 price tag is a fraction of the new Wemo WiFi Smart Plug, which goes for $24.99. Here again, however, you can’t buy just one Peace by Hampton smart plug—they’re available only in two-packs for $18.99. Wemo’s other advantage is that it’s part of a broader ecosystem that also includes in-wall switches and dimmers.

These new smart lighting products will be controlled by the Peace by Hampton mobile app, which will be available for Android and iOS. Users will be able to program the bulbs and smart plugs to operate based on the time of day, on sunrise/sunset schedules, or even according to weather conditions. They can also be activated by geofencing, so that lights turn off when you leave home and come on when you return (provided you take your smartphone with you). Smart speaker compatibility is also promised for Amazon Alexa, Google Assistant, and Apple’s Siri (as well as Apple Widget).

The Peace by Hampton product line will be a Best Buy exclusive at launch.

Updated shortly after publication to add information about the bulbs’ lumen ratings and to add links to Best Buy, where the products can be purchased.