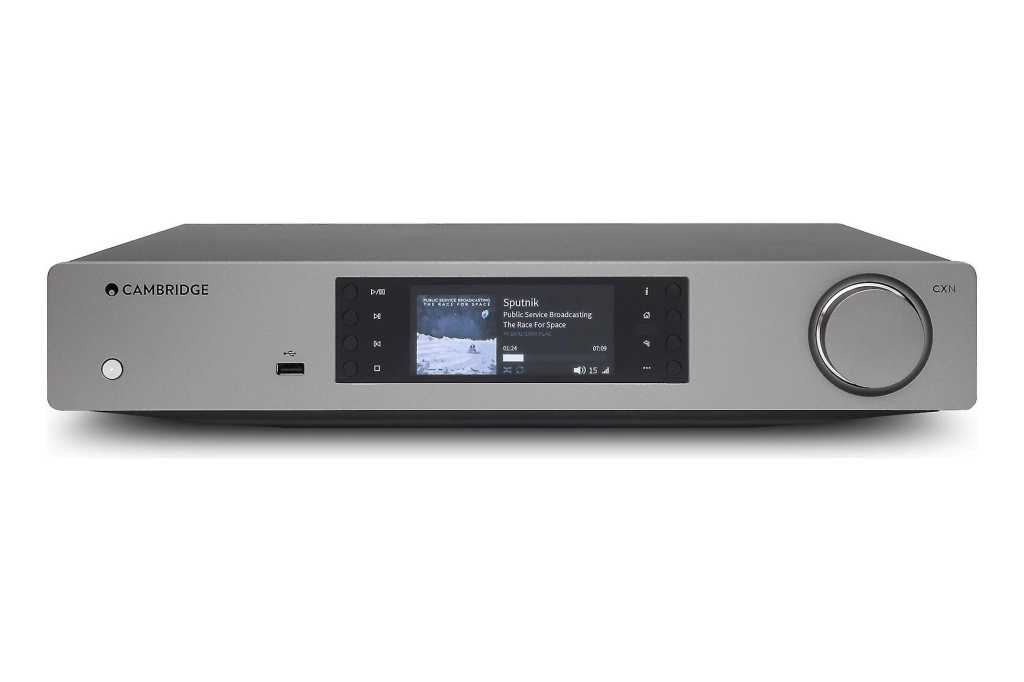 The Cambridge Audio CXN (v2) will deliver a sublime music experience using just about any digital audio protocol you can imagine—now and down the road.

A network audio streamer is designed to serve as a central hub for all your digital audio sources. Cambridge Audio’s $1,099 CXN (v2) network audio streamer is arguably among the best you’ll find. The CXN (v2) marries a super-rich feature set, copious connectivity options, broad support for multiple ecosystems, and solid audio performance into a near-perfect package that will fit into just about any scenario.

Even better, regular firmware updates promise to add features and functionality, making for an investment that you’ll enjoy for years to come.

The CXN (v2) is designed to sit at the heart of a high-performance audio system. It’s sculpted design and brushed metal accents make this a piece you won’t mind putting on display front and center.

The unit’s front panel display would be killer if it was an OLED panel. You’ll instead have to settle for a pretty-good LCD display that I found to be crisp, sharp, and good enough to get the job done. Tactile buttons flanking the LCD display are clearly and intuitively marked. The large knob on the right helps you fly through menus while pressing on the knob selects the highlighted menu item.

Flexible input and output options abound. Pick from sources featuring S/PDIF coaxial, Toslink optical, USB Audio, or attach plain-ol’ USB storage. Use the CXN (v2) as a USB audio device, and you can manually choose between USB Audio Profile 1.0 or 2.0 as well.

In addition to S/PDIF coaxial and Toslink Optical (which are concurrently active), you’ll find unbalanced analog output and balanced (XLR) stereo output. Those with high-end audio gear crave components with balanced connections due to their ability to reject cable-borne noise and interference. The only output you won’t find is HDMI, which frankly is no big deal.

For a unit of this caliber, I view Bluetooth as a convenience instead of a feature. Cambridge Audio must see it that way, too. If you really want it, Cambridge Audio offers an optional adapter, the BT100, that supports aptX for better-quality streaming. It won’t take you into the realm of high-res streaming, though, because it doesn’t support aptX HD. Should Bluetooth be important to you, note that the adapter that occupies one of the USB ports that could otherwise be used to host a storage device.

Onboard 10/100 ethernet provides a stable connection to your home network. While the techie in me would like to see a gigabit ethernet connection, a stable 10/100 connection is more than adequate for streaming even very large high-res files. If your home doesn’t have the infrastructure to support wired connections, Cambridge Audio offers an optional Wi-Fi adapter. I always recommend using a wired connection due to its stability and speed.

Lots of tricks up its sleeve

Cambridge Audio’s CXN (v2) is an incredibly well thought out and flexible unit that can be integrated into a broad array of ecosystems, including both Google’s Chromecast and Apple’s AirPlay 2. The more time I spent with the CXN (v2), the more thoughtful features I discovered. There’s a ground-lift switch next to the USB Audio input for example; that’s a really smart feature for defeating any ground loop that might emanate from you speakers when you connect a computer or NAS box to the streamer.

While the CXN (v2) is billed as a network audio streamer, it can also function as a full-blown digital preamplifier. Turn on the digital preamp function and voila! The navigation dial on the right side instantly doubles as volume control. Pair the CXN (v2) with a high-quality stereo power amplifier, connect a pair of killer speakers, and you’ll find yourself armed with a compact powerhouse of a system at a modest overall cost.And the tricks don’t stop there. Homeowners with complex multi-room control systems—or the custom installers they hire to put those types of systems in—will love that the CXN (v2) has a dedicated control bus and can send and IR commands via a port on the unit’s rear panel.

But the CXN (v2)’s upgradeability via firmware might be its best feature of all. You might think of device as a personal computer optimized for audio. Whenever new features and services come out, Cambridge Audio can upgrade this machine to offer them. Since its original launch, the company has added Tidal and Qobuz integration, Chromecast and AirPlay 2 support, and—most recently—the company has rendered its streamer Roon Ready (you can read our early Roon review here, and its latest features here. All of that comes on top of its UPnP compatibility, Spotify Connect support, and internet radio features (don’t miss our iin-depth, two-part guide to internet radio).

Fits seamlessly into any streaming ecosystem

I run a mixed protocol environment, and the CXN (v2) was comfortable with all of it. Firing up AirPlay 2, I easily streamed to the CXN (v2) from any iOS device or grouped it along with my Denon X8500H and Apple TVs for whole-home audio. Alas, Apple still doesn’t support high-res streaming over AirPlay 2 (call this a sincere shout-out request, Apple).

The CXN (v2) came up as a native Chromecast client, too. Adding the CXN (v2) to my Google Home app, I created a speaker group with Cambridge Audio’s other standout, the Yoyo (L) streaming speaker, and Definitive Technology’s Studio Slim soundbar.

I use Roon religiously as my primary music server, and here’s where Cambridge Audio’s design brilliance paid off in spades. I could add the CXN (v2) as an “endpoint” for each supported protocol and create speaker groups accordingly. In other words, I could add the CXN (v2) as an AirPlay endpoint and Chromecast endpoint and create native AirPlay and Chromecast speaker groupings using the CXN (v2) in both. Moreover, I connected my Roon Nucleus server via USB to the CXN (v2) and connected it to my Anthem AVM 60 pre-amp. I therefore had the potential to create multiple, independent instances of the CXN (v2) to fit whatever protocol or architecture I craved. And for those of you who play DSD (Direct Stream Digital) sources, the CXN (v2) let me choose whether I wanted to use DoP (DSD over PCM) or PCM for digital output.

I could go on and on. I kicked the tires on the CXN (v2) for months mixing and matching review gear and my personal gear in and out, and the CXN (v2) never missed a beat and partied well with all of them.

While you can control Tidal and internet radio features directly from the CXN (v2)’s on-screen interface, you’ll want to download Cambridge Audio’s iOS or Android StreamMagic app to expand your experience—and the unit’s functionality—even further. The StreamMagic app acts as a command and control center for the CXN (v2) and other networked Cambridge Audio devices. StreamMagic gives you central command of Tidal and Quobuz integrations. I could seamlessly browse and play my Tidal music and playlists.

The StreamMagic app made internet radio a truly worthwhile feature, too. I searched for radio stations in the U.S. and abroad. And by changing my iOS device’s language keyboard, StreamMagic let me search for stations in Greece with their native Greek names. I searched for stations from Athens to Crete with ease. If you enjoy exploring foreign music stations, you can do so in your language of choice.

There were times, however, when I found the StreamMagic app to be a bit funky. On more than one occasion, the “settings” would simply spin endlessly, telling me that the connection was lost. Oddly enough, every other menu and function worked just fine. Cambridge needs to track down those Gremlins.

I’d be remiss if I didn’t give a nod to Cambridge Audio’s outstanding IR remote control. I wish that the remote control had elements of the unit’s brushed metal integrated. Nevertheless, the plastic remote feels solid and certainly high end. Buttons are well laid out—though those with visual difficulty will find the writing on the buttons to be a bit small. But every conceivable function is available at the press of a button, and once I learned where those functions were, I could call up basic functions without looking.

I set up the Cambridge Audio CXN (v2) into my main system with both analog audio output to my Anthem AVM 60 preamp and S/PDIF digital audio to the AVM 60. I set up the Anthem to support the analog and digital inputs separately. I connected it to my Roon Nucleus server by way of USB, Chromecast, and AirPlay 2. Benchmark AHB2 power amplifiers configured in bridged mono provided the power for Revel Ultima2 Salon speakers.

The best compliment I can pay the Cambridge Audio CXN (v2) is that I just set it and forgot it in my system. It just worked, time after time, letting me focus on the music and what I wanted to do. You’ll find that the CXN (v2) will at times be brutally honest. If your source material isn’t great, the CXN (v2) will let you know. On the flip side, well-recorded material shines with ample detail.

Comparing the CXN (v2)’s DAC to the Anthem AVM 60’s DAC yielded easily audible differences. The Anthem uses an AKM AK4458 32-bit/768 kHz with differential output, where Cambridge Audio uses Wolfson WM8740 24-bit DACs. Sending a digital signal from the CXN (v2) to the Anthem, so that the Anthem could decode the bit stream, produced a warm, smooth, well-balanced, and velvety sound. Using the Cambridge Audio’s analog outputs from the Wolfson WM8740’s yielded a clean, detailed, but more relaxed sound, with a slightly deeper soundstage whose midrange in particular placed more emphasis on vocals.

A winner by any measure

The unit’s rich feature set and its solid sonics are well worth the lofty asking price of $1,099. For the diehard digital music devotee, Cambridge Audio’s CXN (v2) audio streamer deserves an urgent audition, and it earns my highest recommendation at this price point.