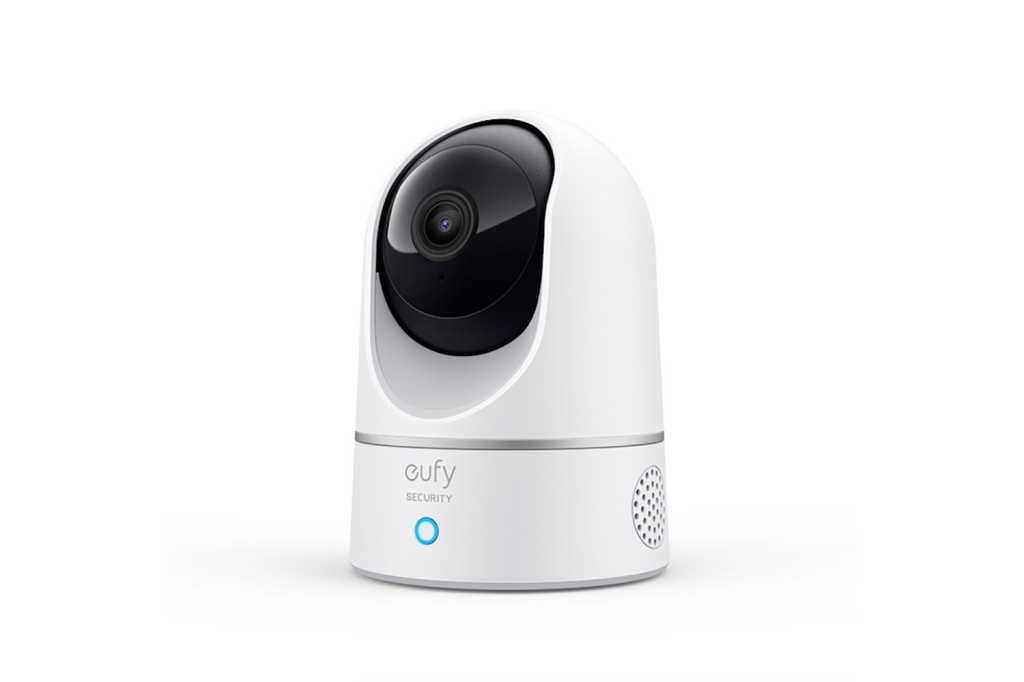 As you might deduce from the names, the main difference between the two is that the Indoor Cam 2K has a fixed viewing angle and the Indoor Cam 2K Pan and Tilt can rotate 360 degrees horizontally and pivot 96 degrees vertically. They otherwise have virtually identical specs and features, including a 125-degree field of view (without panning, in the case of the latter), 2K resolution, automatic night vision, 8x zoom, and two-way audio.

Like the Indoor Cam 2K, the Indoor Cam 2K Pan and Tilt comes with motion and sound detection, the ability to distinguish between humans and pets, and it can recognize the sound of a baby crying. It also supports Alexa, Google Assistant, and Apple HomeKit—including HomeKit Secure Video, which allows for the analysis of recorded video clips on a local HomePod, iPad, or Apple TV, as well as encrypted video storage in iCloud. HomeKit support might come after the camera ships in mid July.

The camera supports up to 128GB of local storage via a microSD card (no card is included). Eufy also offers two rolling 20-day cloud storage plans. The Basic plan provides storage for $3 a month or $30 a year per camera, which is the best choice for up to three cameras. For four or more cameras, you’re better served by the Premier plan, which gives you a bulk discount for up to 10 cameras for $10 a month or $100 a year. A third option is to save clips to a third-party network-attached storage (NAS) device via Real Time Streaming Protocol. The Eufy Security companion app includes a setup guide for this method, but you might need to acquire a license from your NAS box manufacturer to record security camera footage to it.

You control the pan-and-tilt camera with the Eufy Security app. It guides you through the process of pairing the camera to your phone and connecting it to your Wi-Fi network. You just need scan the QR code on the device and enter your network login credentials. 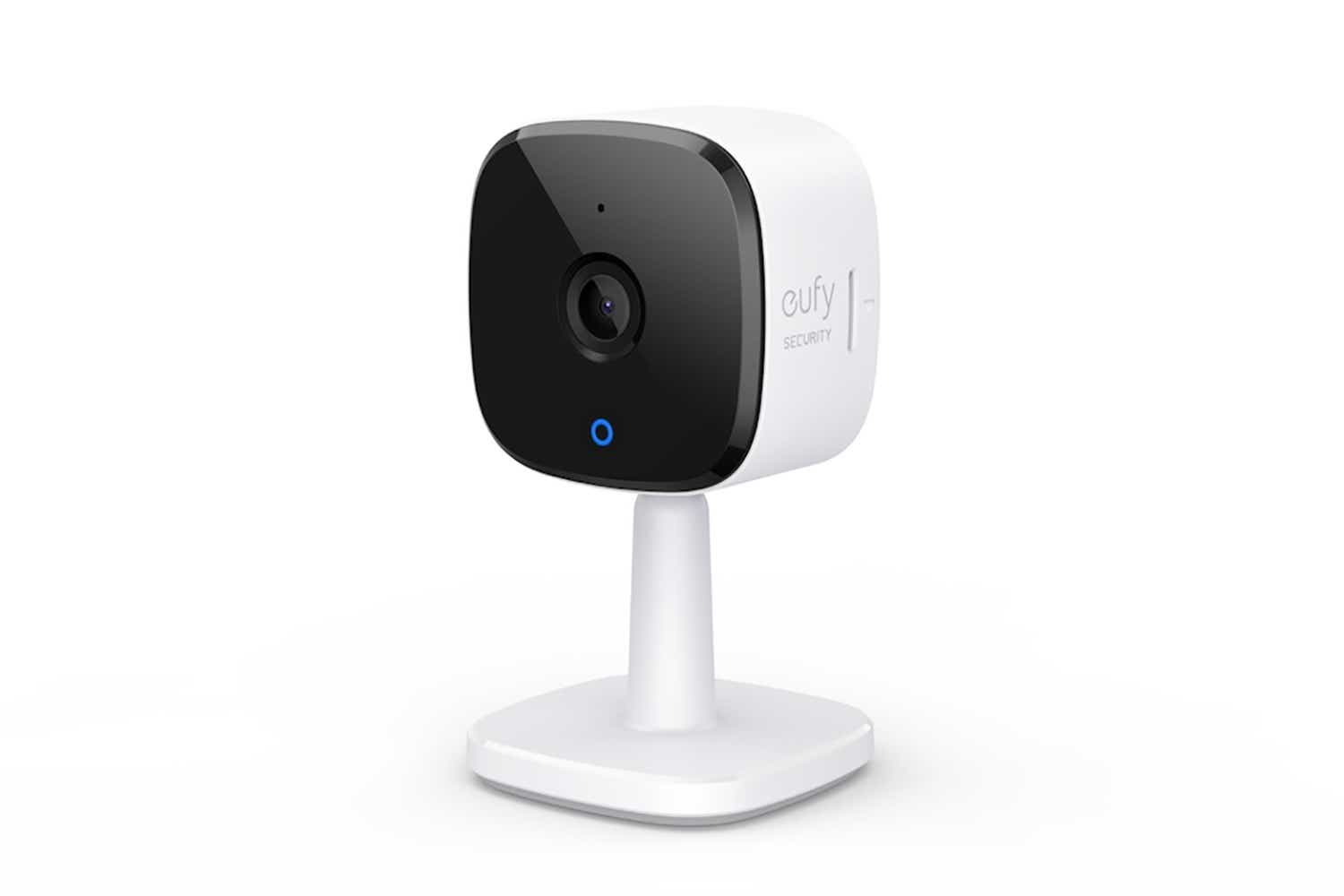 The camera appears on the app’s device screen with the name you gave it during the setup and a screenshot of its current view. Pressing the play button here opens the live feed. The layout is largely the same as with Indoor Cam 2K— live stream at the top, camera controls at the bottom—with the exception of big directional dial smack in the middle. Pressing any of the four cardinal points rotates the camera in that direction. It responds quickly and moves smoothly. You can calibrate the pan-and-tilt and adjust the rotation speed on a 1-5 scale in the settings.

In addition to controlling the pan-and-tilt yourself, you can set the camera to lock on to any moving object it detects by enabling motion tracking. This worked well in my testing, with the camera shadowing a family member or pet and following them anywhere they went. In a real-world scenario, this would allow you track the movements of an intruder, eliminating the blind spots created by a fixed-angle camera.

Having experienced Eufy’s AI detection previously, I knew how accurate it could be, and it didn’t disappoint this time. People were identified as humans, and my dog and cats as pets. Detected noises and movement that didn’t fall into these categories were tagged as general motion and sound.

Every notification includes a large screenshot of the triggering person/pet that you can tap to open the captured video clip. If you don’t want to drown in a tide of these alerts, there are several ways to manage them. You can adjust the sensitivity of both motion and sound detection to receive fewer of all alerts, or you can select only the types of sound and movement you want to monitor. You can also opt to receive alerts for only those events you want to know about, change the interval time between two event notifications, and choose the content you want included in notifications and how those are delivered (text only; text first, then thumbnail; or text and thumbnail together).

One of my favorite features on the Indoor Cam 2K is also included with pan/tilt model: Pet Command lets you automatically issue pre-recorded commands when the camera detects your pet in a particular area. To use this feature, you have to establish an activity zone by masking an area you want the camera to monitor for motion. Next, you record and set the audio command you want the camera to play when it detects your pet in that area. I created an activity zone around the main part of my living room and recorded a “Bed!” command to play whenever my dog strayed from his bed pad. Because the recording was in my voice and not a canned one, he responded as if I was there in the room with him.

You can access all your event-triggered clips from a tab on the device screen. They’re organized most-recent first, and you can download, share, delete, or donate the clip to help improve the camera’s performance. You can also scrub through live-stream footage using a scrolling timeline on the live-feed screen.

The Indoor Cam 2K Pan and Tilt, like its companion Indoor Cam 2K, offers a raft of security features for an unbeatable price. It’s best suited to large spaces where its pan-and-tilt and motion tracking will help you cover a lot ground, and its tack-sharp resolution and intelligent alerts should satisfy first-time camera owners and seasoned home security pros alike.