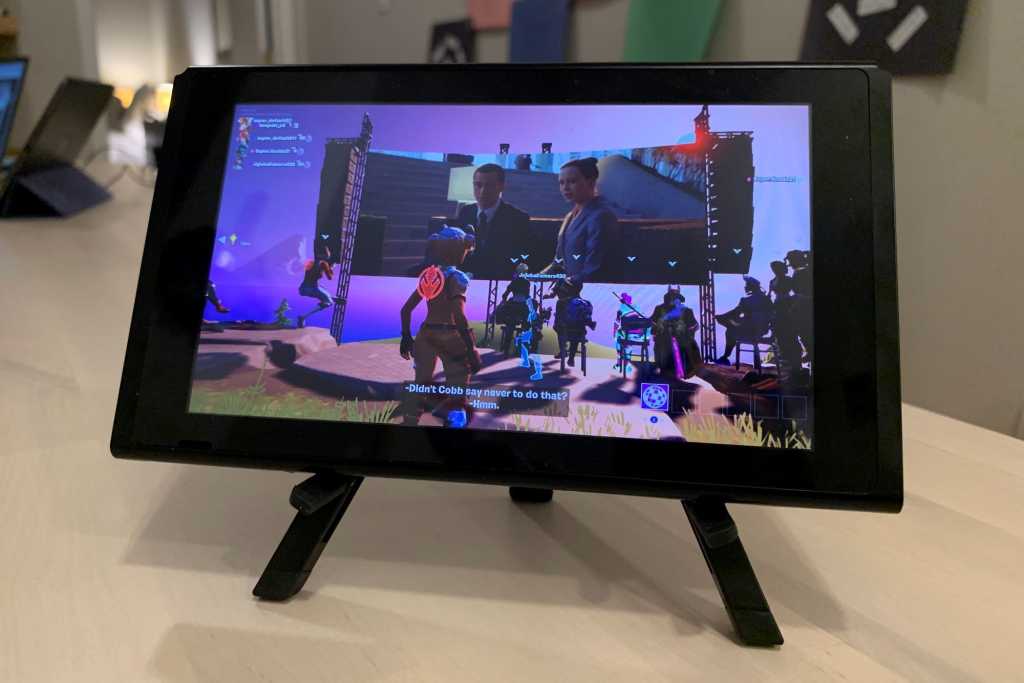 Movie theaters aren’t anywhere near opening here in New York City (a wise thing, if you ask me), and the nearest traditional drive-in theater to Brooklyn is a 60-mile drive—not that I own a car, mind you. But I just did the next best thing to going to the movies: I watched Inception in Fortnite.

Epic Games, the gaming studio behind Fortnite, is streaming three Christopher Nolan movies in its wildly popular battle royale game today. Inception is the movie showing in the United States (The Prestige and Batman Begins are available in other regions), and I caught the 8 a.m. showing; the movie will play again at 8 p.m. ET and 11:55 p.m. ET.

Inception is playing at the Big Screen on the west side of Party Royale, a new, non-competitive social space in Fortnite. Launching Fortnite on my trusty Nintendo Switch, I matchmade into a four-person squad (I didn’t encounter any server issues at all, at least not on the Switch) and found myself standing in a garish mall wearing a Star Wars backpack and a reindeer suit (yes, it’s been awhile since I logged into Fortnite). At first I stumbled around the neighborhood and pulled up the map, looking for landmarks, but then I looked up and saw spotlights beaming into the sky. My destination, it seemed.

I ran toward the lights and soon arrived at a rough-hewed amphitheater with a giant movie screen flanked by trees; stretching beyond the screen was the sea, with snow-tipped mountains visible far off in the distance.

About 20-odd Fortnite avatars were gathered in front of the screen, some motionless (and presumably ensconced in the movie, which had already started), while others were dancing, jumping, or running behind the screen, where you could see a reverse image of the picture. One or two even managed to climb the massive struts holding up the screen, pulling off a few emotes before jumping off and gliding to the ground.

I walked into the film about a third of the way though (right around the time Cobb and his crew land in the first level of Yusef’s dream), and my fellow Fortnite players were still restlessly bopping about, but within a few minutes or so most had settled in to watch the movie, some even pulling out chairs while others took a knee.

The actual movie looked smallish on the Big Screen, and there wasn’t a full-screen mode, but let’s face it: we didn’t come to watch a movie in Party Royale for the picture quality.

Similarly, the sound was OK but not amazing, although I did enjoy how the audio from the virtual speakers remained in place even as I moved my avatar’s head around. You could also turn on subtitles if you were having trouble making out the dialog (the subtitles were on by default for me).

The only real sound issues I encountered was when someone in our squad began warbling nonsensically (welcome to multiplayer, folks). A quick trip to the Settings menu muted all game chat. Of course, had I partied up with some actual friends, we could have chatted away during the movie; rude in real life, but not so much on Party Royale.

One oddity about watching a movie in Fortnite is the game’s rapid day/night cycle, which meant it was only night time for about seven or eight minutes at a time. I could still make out the picture just fine during daylight, but it (temporarily) ruined the feeling of being at the drive-in. My suggestion: keep it dark in Party Royale during showtime, or at least in a bubble surrounding the Big Screen.

Overall, I was surprised by how much I enjoyed the vibe. Sure, there was some silliness on the part of my fellow Fortnite avatars (someone ran up and started pelting me with snowballs at one point—hey, it’s still Fortnite, after all), but for the most part everyone seemed to be enjoying the movie, and seeing everyone lined up in their virtual lawn chairs reminded me of being a kid at the drive-in on a warm summer night. I’m sure going to the movies in Fortnite would be even more fun in a party of actual friends, particularly those who I might not see in person for a very, very long time.