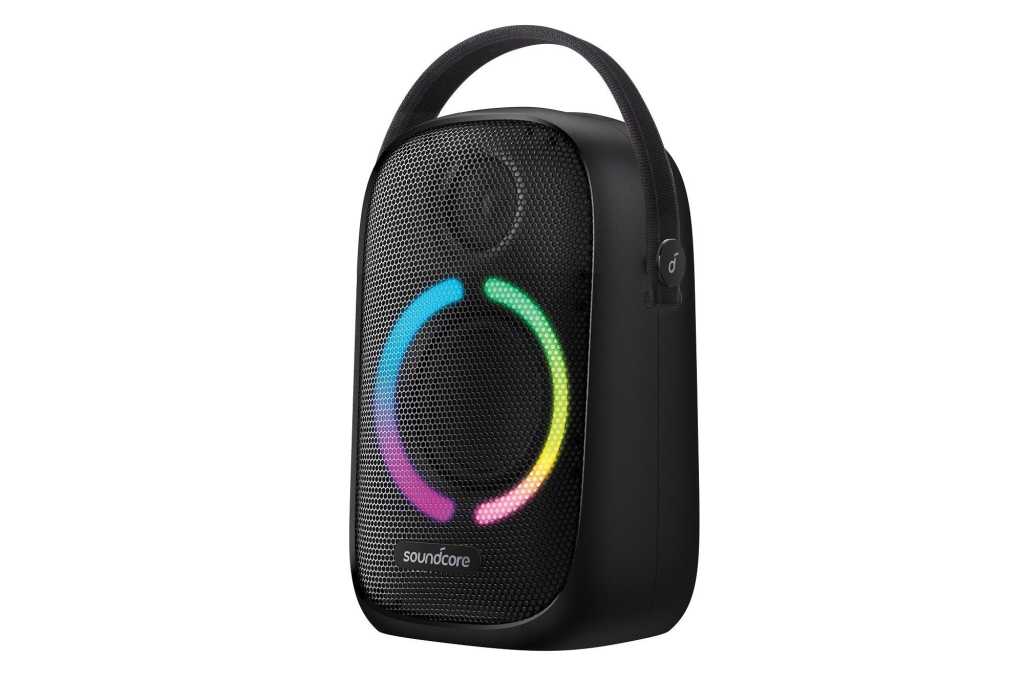 Image: Anker
At a Glance

This speaker is the party animal Anker advertises: loud, thumpy, with a fun if not scintillating light show.

If you’re looking for a speaker to inspire wholesale shuffling at your next party, then Anker’s $99 Soundcore Rave Neo is just what you’re looking for. It’s loud with a tight, thumpy low end that will promote all sorts of rhythmic action and thoughts. (It had my roommate Bridget dancing in zero seconds flat).

Audiophile, it’s not, but that’s not its gig and the Rave Neo renders the desired effect when in its element.

The Soundcore Rave Neo is an upright, monophonic speaker that measures a little more than 11 inches tall, about 5.5 inches at its thickest, and roughly 7 inches wide. It weighs in at a little less than 7 pounds, but an easy-on-the-hands, fabric-covered strap makes for easy toting.

The controls for the Rave Neo are on top of the unit as you can see in the above product image. There’s the usual volume up/down, Bluetooth pairing, and power buttons, plus a toggle for the bass boost. Also on hand is the link button for PartyCast, which will link the Rave Neo with up to 100 of its ilk.

There’s a button to change the patterns produced by the RGB LEDs circling the 4-inch woofer (there’s a 2-inch full-range driver and passive radiator as well), and a very unusual icon (between the plus/minus) representing a multi-function play/pause/previous/next button. 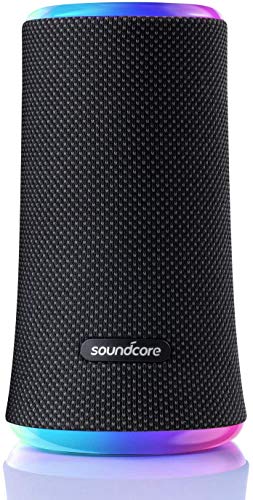 Anker includes a “universal” one-picture-is-worth-a-thousand-words type manual for the Rave Neo, but it could be a lot clearer and was incomplete. For instance, it didn’t cover changing between the three EQ modes (done via the Soundcore app) or how to invoke the Siri/Google phone function at all. I had to peruse the Anker’s website about the first, and discovered the latter (super long press on the weird icon) by sheer luck.

The Rave Neo is rating IPX7 for protection from water, meaning you can submerge it in the kiddie pool (up to one meter) for up to 30 minutes (you can read more about IP ratings and what they mean in this story). To that end, the USB-C charging port, USB Type-A charge-other-stuff port, and 3.5 mm stereo auxiliary input are hidden beneath a captive rubber plug on the back of the unit.

The Soundcore Rave Neo might be the most aptly named speaker I’ve run across. It’s designed for parties, where volume and bass count for more than uber fidelity. Viewed (and listened to) from that perspective, it’s a good speaker.

The Rave Neo’s best trick by far is its tight, pumping bass. Anker nailed it, and the section of the mid-range it accentuates is the one most likely to cut through crowd noise, wind, and other ambient stuff.

As usual, I threw a variety of genres at the speaker, and I wasn’t impressed until I cranked it up and hit the EDM  (Electronic Dance Music) and hip hop selections. At that point, it came to life.

Employing the EQ in the Soundcore app made a huge difference for quieter types of music, though it couldn’t compensate fully due to an overall slight lack of high-end sparkle, somewhat weak upper mid-range definition, and the absence of stereo separation. Quiet contemplation isn’t really the Rave Neo’s thing. That said, with the default “outdoor” EQ setting, the portion of the mid-range that cuts through crowds and other noise is definitely there.

I left the bass boost engaged for the most part, and used the EQ to dial it back as necessary.

Battery life was just around the claimed 18 hours at the lower volumes I used, but will decrease as things gets louder. If you’re going to party hard for that long, you’ll need an AC outlet.

Anker also sent me a smaller Soundcore Flare 360 speaker ($69) to test the PartyCast feature that it and the Rave Neo share. The Flare 360 has much better high-frequency performance and stereo separation, but weaker bass. The pairing was far more satisfying sonically than either speaker on its own.

Note that PartyCast linking was easy, but that no sound issued from the Flare 360 until I boosted the volume on the Rave Neo. The lack of emanations consternated me for a good half hour.

A great outdoor or party speaker

As it will likely be used under conditions where the relative lack of sparkle and upper-range definition won’t matter, the Soundcore Rave Neo is on point for its mission: loud, throbbing, dance music delivery. Buy it for that. And if you want a nicer sonic experience, pair it with the Soundcore Flare 2.