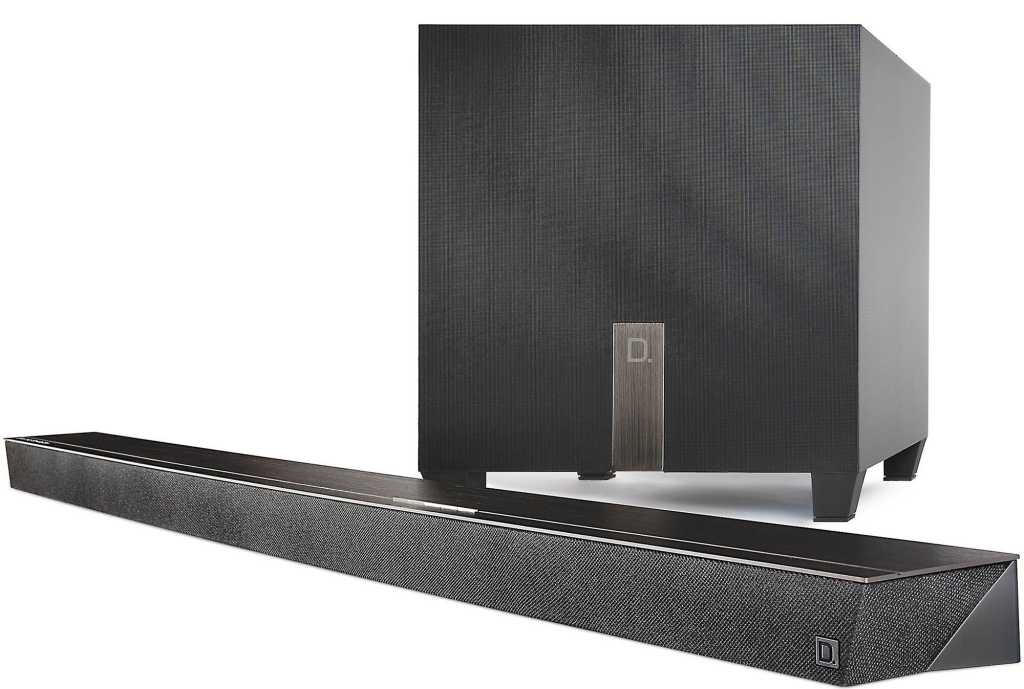 Image: Definitive Technology
At a Glance

The best soundbars achieve an almost perfect balance of aesthetics and performance. They eliminate the visual eyesore of speakers, amplifiers, and wires while delivering sonic performances that are vastly superior to any modern TV’s sub-par audio. Relatively few reach that goal, leaving you to choose between an industrial design that will look attractive beneath your TV, and the type of audio presentation that will get your pulse pounding.

Definitive Technology, a venerable name in high-end home theater and audiophile circles, comes very close to balancing those scales with its Studio Slim system, consisting of a svelte soundbar in a beautiful enclosure paried with a thundering wireless subwoofer and offered at price that won’t take your breath away.

It’s not a smart speaker in and of itself, but you can control it using Google Assistant, and it also supports Google’s Chromecast audio-streaming technology as well as Wi-Fi and Bluetooth.

This review is part of TechHive’s coverage of the best soundbars, where you’ll find reviews of competing products, plus a buyer’s guide to the features you should consider when shopping.

The Studio Slim’s form factor is worthy of its name. At approximately 1.81 inches tall, 3.25 inches deep, and 43.39 inches wide, you must see the Studio Slim in person to appreciate its minimalist dimensions. Even in such a trim footprint, there’s nothing cheap in the Studio Slim’s material or build quality—everything about this speaker says high-end audio.

Where most soundbars are designed as boring rectangular boxes (the new Sonos Arc being a notable exception), the Studio Slim favors a trapezoidal design with outer edges that angle inward, giving the visual illusion that the Studio Slim is even smaller than it is. A beautiful, charcoal-gray, brushed-aluminum panel graces the top of its enclosure, and its front grill is woven from acoustically transparent speaker cloth. The Studio Slim’s wireless subwoofer, meanwhile,features a textured veneer that endows it with a bit of flair—even though you’ll likely tuck this component away in a corner of the room.

You can mount the Studio Slim on a wall thanks to two keyhole mounting points on the unit’s backside, but you won’t find a mounting template in the box. Should you wish to place the Studio Slim soundbar on a shelf or cabinet, thin rubber feet on its bottom will prevent any scratching or marring of surfaces.

LEDs light up behind the grille let you know the soundbar’s volume, DSP setting, center channel and bass balance, and active input. Unfortunately, you’ll need to memorize what the lights and flashes mean. But Definitive Technology does a good job of defining the visual cues in its otherwise Spartan user manual, and having 10 LED segments to indicate volume level made it easy for me to determine if the speaker was putting out 30, 50, or 70 percent of its maximum output.

These drivers are powered by a 70-watt amplifier that performed cleanly in my listening tests, with no overt hints of strain or distortion. The Studio Slim’s primary drivers aren’t large enough to dig deep, so Definitive Technology relies on an included wireless subwoofer for low-end support. The approximately 14 x 12.5 x 12.5-inch (HxWxD) subwoofer comes pre-paired with the soundbar. All I needed to do was plug in the soundbar and then plug in the subwoofer and I was in business.

The sub sports an 8-inch down-firing driver inside an enclosure with four thick rubber feet that do a good job of absorbing any vibrations the subwoofer might produce. Any subwoofer’s performance—both how deep it plays and how cleanly—will be directly related to its placement in your room. Generally speaking, you’ll get the strongest and deepest bass performance if you put the sub in a corner (but you might not necessarily get the cleanest bass performance that way). Given that the included subwoofer is wireless and not very heavy, I suggest giving the subwoofer crawl placement method a try.

The Studio Slim comes with three inputs: One HDMI ARC (Audio Return Channel), one Toslink digital optical, and a USB interface. Those three inputs should be enough for most consumers’ setups. There are no analog options. The vast majority of TVs introduced in the past five years come with either or both HDMI ARC and Toslink connections.

Note that even if your TV has HDMI ARC, it probably came from the factory with that feature turned off by default. So, you’ll need to enable HDMI CEC and ARC for this to work. In case you’re wondering, the soundbar does not support video passthrough (which is not at all unusual). You therefore cannot connect your entertainment source (a Blu-ray player or a videogame console, for instance) to the soundbar and then run another connection from the soundbar to the TV.

The Studio Slim’s remote control is well designed and laid out. While it’s not backlit, the buttons are intuitive and easy to work by touch when you’re in low-light situations. Being an infrared device, the remote relies on line of sight. That said, I was able to control the soundbar with the remote at as much as a 45-degree angle to the speaker. You might also be able to use your TV’s remote to control the Studio Slim’s volume (more on that in a bit), and you can definitely do it with the Google Home app on a smartphone or tablet.

The remote allows you to enable one of three DSP modes: Movie, Music, and Night. Movie mode promises to deliver a larger soundstage and more punch; music is a more neutral EQ; and Night mode will reduce the soundbar’s volume and dynamics, so you’ll be less likely to wake the nighbors or your significant other.

The vast majority of soundbar remotes aren’t programmable, and soundbars typically repspond to discrete IR codes specific to each manufacturer. Definitive Technology has done something incredibly smart with the Studio Slim: The soundbar is pre-configured to respond to volume and mute commands from popular TV remotes from Samsung, LG, Sony, Vizio, and other major brands. I was able to control the Studio Slim’s volume with the remote controls from a Panasonic ZT60 Plasma and a Vizio P-Series Quantum TV, but it didn’t work with an older Samsung Plasma TV remote.

The Studio Slim is equipped with an 802.11 b/g/n Wi-Fi adapter, but there’s no option for hardwired ethernet. The first step in setting up this soundbar is to connect it to your Wi-Fi network using the Google Home app. So there’s no confusion, Definitive Technology puts a “Google Home required” sticker on the back panel, for those who don’t like to read user manuals.

Once you’ve done that, you can integrate the Studio Slim into a Chromecast multi-room audio ecosystem and control it with Google Assistant via your mobile device or a separate smart speaker.

For me, setup and configuration were straightforward: I powered up the Studio Slim, launched the Google Home app on my iPhone, and was ready to go in just minutes. Google Home instantly prompted me to set up the Definitive Technology Studio Slim and assign it to my home and to a room. Like most app-based sound bars, I had to go through a firmware update before I could start using it. I successfully integrated the Studio Slim with a Cambridge Audio YoYo speaker and CXNv2 network player by creating speaker groups and simultaneously steaming audio to each.

While you’ll certainly get the best audio performance via Chromecast over Wi-Fi, you do have the option of Bluetooth streaming. Just take note that Bluetooth will work only after the studio system has been set up with the Google Home app.

I should note that the Studio Slim doesn’t support streaming ecosystems beyond Chromecast. Definitive Technology’s parent company is Sound United, which also owns Denon, Marantz, and Classé, among other major audio brands. My main home theater is centered around Denon’s exceptional X8500H receiver, which features HEOS and AirPlay, so I was disaapointed to discover that I couldn’t integrate the Studio Slim into my HEOS.

Performance far beyond its footprint

I set up the Studio Slim in my family room, where it took the place of another far larger soundbar without a subwoofer. I used Tidal streamed via Chromecast for music, and my entertainment sources were cable TV and an AppleTV 4K. I used a Toslink optical to provide audio from my TV to the Studio Slim.

I learned immediately that I shouldn’t judge the Studio Slim’s performance by its footprint. This baby performs well beyond its size. I was immediately taken by the Studio Slim’s presence and dynamics. In fact, the initial notes I wrote were, “punchy and dynamic.” This slimline soundbar system delivered beautifully clean and clear dialog no matter what the source material—including lots of cable TV content. Movies, game shows, news programming, you name it, there wasn’t anything that this speaker didn’t ace.

The Studio Slim did an outstanding job rendering a deep and large soundstage during the opening scenes of the 24 Hours of Le Mans on Ford Vs. Ferrari. No way was I expecting this soundbar to dig in deep with such superb dynamics. As with all soundbar-and-subwoofer combinations, there’s a clear boost in the upper bass that aids the system with its chest-pounding delivery. Manufacturers perform this trick as it gives the illusiion of deep bass. When I played material with legitimately deep bass notes, however, Definitive’s setup just couldn’t deliver. Physics is still physics, after all.

On the flip side, the Studio Slim has a tendency to sound thin when it’s in Movie DSP mode. If that bothers you, switch to the Music DSP mode to get a warmer and more neutral presentation.

But if you have any doubts about this soundbar’s aptitude for peak performance, drop in Tron Legacy and fast foward to the scene were Flynn drops into the Grid as the Recognizer bursts onto the scene. Yes, the eight-inch subwoofer isn’t anywhere near capable of delivering the authoritative, subterranean bass contained in the scene, but it certainly performed well within the frequency range it could deliver.

The included remote allowed me to increase the center channel volume, noticeably lifting dialog if I needed it. This made speech more pronounced and separated from the rest of the soundtrack, but the inevitable drawback is that it threw the overall audio balance off kilter. So, the option is there, but you might not need it. I played the speaker for someone with a hearing impairment and who requires hearing aids, and he said he had no problem whatsoever understanding dialog with the Studio Slim at its default setting.

Definitive Technology’s Studio Slim soundbar is a niche product designed specifically for those who want a soundbar with a small footprint, but who don’t want to sacrifice premium audio performance to get it.

And with built-in Chromecast and Google Assistant support, you’ll be able to integrate the Studio Slim into a whole-home entertainment solution with Google-friendly speakers in other rooms all over your house. It’s a great solution.