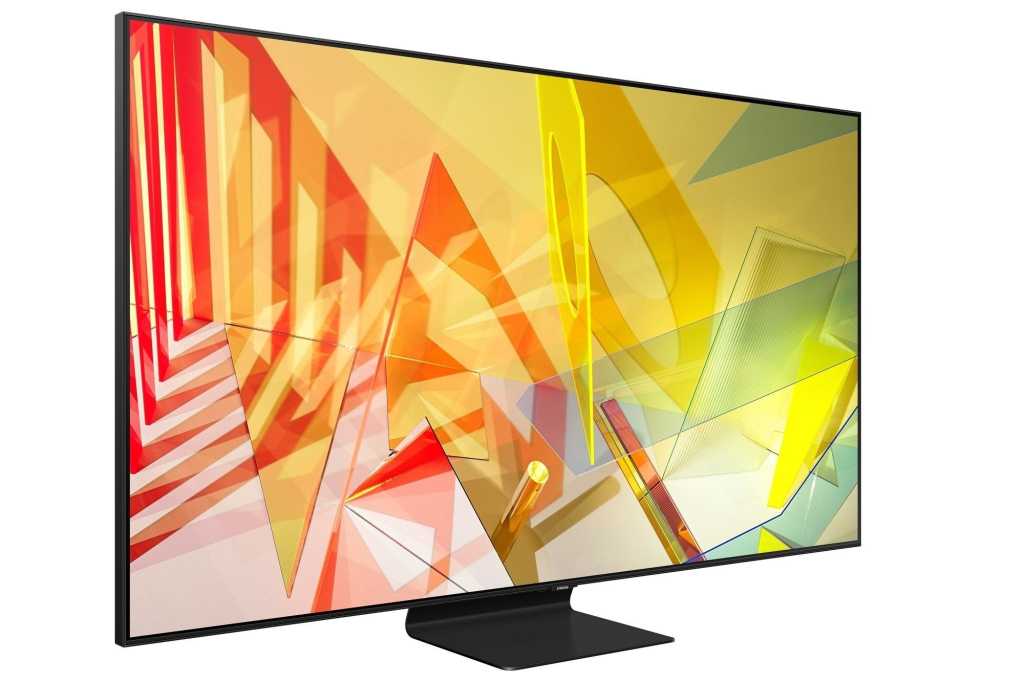 You won’t get Samsung’s One Connect breakout box with the Q90T, but you will experience some improvement in picture quality compared to last year’s model: HDR is spectacular, and there are fewer visual artifacts to distract you from the content.

Samsung’s Q90R was arguably the best 4K UHD LED-backlit LCD TV of 2019. This year’s Q90T is in line for equal status, with picture tweaks that eliminate—or ameliorate—some of my complaints from last year. My gripes about the Q90R were few and far between, so consider the Q90T the best getting better.

There is, however, one major change: this will please some and disappoint others, but the One Connect breakout box is now history—all the Q90T’s ports reside on the TV itself. If you want One Connect, your only option is the reportedly wonderful, but expensive ($13,000) 8K UHD Q950TS.

If you’re going to set the Q90T on a surface, as opposed to hanging it on the wall using its VESA mount point, I’m pretty sure you’ll like the iMac-like pedestal stand. It has just a 13.5 x 9.5-inch footprint, and that leaves a lot of room on larger surfaces for other stuff. There’s also enough vertical clearance (around 10 inches) from the bottom of the screen for a soundbar or what have you. Yes, I’m a fan of the pedastel.

While the ports on the Q90 series are no longer housed in a breakout box, there’s a capable selection including four HDMI ports (with eARC support on one), coax for cable or an over-the-air antenna, Toslink digital audio out, and a 3.5mm analog audio out. There are also two USB ports on the back. If I have any gripe at all, it’s the lack of an easily accessible side-mounted USB port. I suggest adding a hub if you regularly connect USB media for video, music, or image playback. Connectivity options include 10/100 ethernet, Wi-Fi 5, and Bluetooth 4.2. 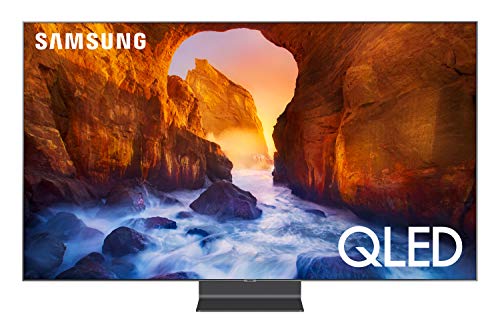 Software features include ambient mode, which allows you to display a digital photo that matches the wall behind the TV, so the TV practically disappears when you’re not watching it. You can also employ the TV as a digital picture frame. The Q90T supports Samsung’s own Bixby digital assistant, plus the two you might actually use: Amazon Alexa and Google Assistant. Siri isn’t supported, but there is the Apple TV app, plus support for Apple’s AirPlay 2 multi-room audio tech.

FreeSync support reduces lag and eliminates screen tearing by matching the Q90T’s refresh rate to your video game console’s, and a universal program guide tracks your content choices and recommends programs that it predicts you’ll like.

The Samsung Smart Hub user interface remains attractive, as well as very easy to use and configure, though its inefficiencies can wear on you over time. Getting to settings requires more drilling through menus than necessary, and you’re never returned to where you left off the last time you visited the Smart Hub. The rest of the industry is catching up—or has caught up—so it would be great if Samsung looked into reducing the number of button presses needed to accomplish anything.

There’s a strong collection of apps, including all the biggies (Hulu, Netflix, YouTube, and so on). And I will commend Samsung on what is one of the easiest TV setups going. Let that person work on the Smart Hub.

The remote remains minimalist, easy, and classy. As always, I do wish there were dedicated transport controls, but it’s still my favorite.

The Q90T’s picture is a mild improvement over last year’s Q90R. It’s not brighter (around 1,500 nits) and the color is about the same, but the processing (i.e., the manner in which it handles digital video information) is improved. Put another way, there are even fewer artifacts to annoy you.

One thing I noticed right off the bat is that the motion smoothing is stronger by default, and there’s no lag before it kicks in. Not that the Q90R’s lag was noticeable in anything but unnaturally fast pans.

The other thing that’s obvious on first blush if you’ve seen previous year’s efforts is that Samsung has backed off just a hair on the default sharpness and contrast. Uber sharp and bright details have been a hallmark of the company for the last several years. This results in far less shimmer and moire in highly detailed images and pans with the default settings.

The picture is excellent, even from steep viewing angles. I can say the same for screen uniformity, with little to no clouding visible when a pure white screen is displayed. The HDR is as impressive as any I’ve seen thanks to the high nit count, although there’s still no support for Dolby Vision. The HDR10+ equivalent, plain HDR10 (static metadata), and HLG are all supported.

This is where I normally talk about the number of zones in the backlight array; but for some odd reason, Samsung never confirms its TV’s zone counts; and in this particular case, the zone counter was a bit hard to read. I’ll just say that the  nighttime in Vegas video I use to spot blooming and other defects looked better on the Q90T than any TV that isn’t OLED—not Samsung’s 8K UHD models.

That said, the Q90T is hardly perfect. But there is no perfect LCD TV—OLED either—although the weaknesses are different (weak black levels on LCD versus weak brightness on OLED). Nearly all the defect I was able to perceive, however, surfaced only in the synthetic tests that I run on all the TVs I evaluate. With real-life material, the only LCD TV I’ve seen with fewer artifacts—at the risk of sounding like a broken record—is Samsung’s own 8K UHD Q900.

Sound is quite good, although I liked the results with my additional tweaking more than letting the Intelligent Adjustment mode handle the chore alone. The mid-range and top-end are well-defined, but bass is less than thumpy. But that’s the nature of the thin-TV beast (with the exception of some OLEDs that vibrate the display itself). It’s also why soundbars exist (you can click here for our pick of the best soundbars).

I never felt a great need for headphones or a bigger sound system during normal viewing; however, the Q90T supports low-latency Bluetooth headsets, which I did switch to for movies. Bluetooth is actually my favorite way of apartment listening, and a lot of TVs require an external module to accomplish it.

An excellent TV for those with the money

The best always costs more, and the Q90T is the best 4K UHD LCD TV I’ve seen so far in 2020. That’s a recommendation—if you have the cash. As noted earlier, the image quality of TVs throughout the price gamut has improved drastically the last couple of years, so you’re paying quite a bit to get that last 10 percent of increased quality.

Also, if you’re spending this much on a TV, and you’re going 65-inch or larger, you might consider Samsung’s 8K UHD Q800T, which is not exorbitantly priced considering how much of an improvement it offers—even with 4K UHD and 1080p content. The 2020 Q800T is priced about the same as the 2019 Q900R, but I have not seen the newer model. That’s not hard advice, just a broad hint.

Note: If you’re a fan of the One Connect breakout box, the Q90R that has the box was still available at the time of this writing. Just be aware that Samsung’s replacement cable costs a daunting $300, and refurbs on Amazon are not much better at $240. Keep your original out of reach of small, chew-happy animals—especially since the 2018 and 2019 models carry electricity as well as signal data.