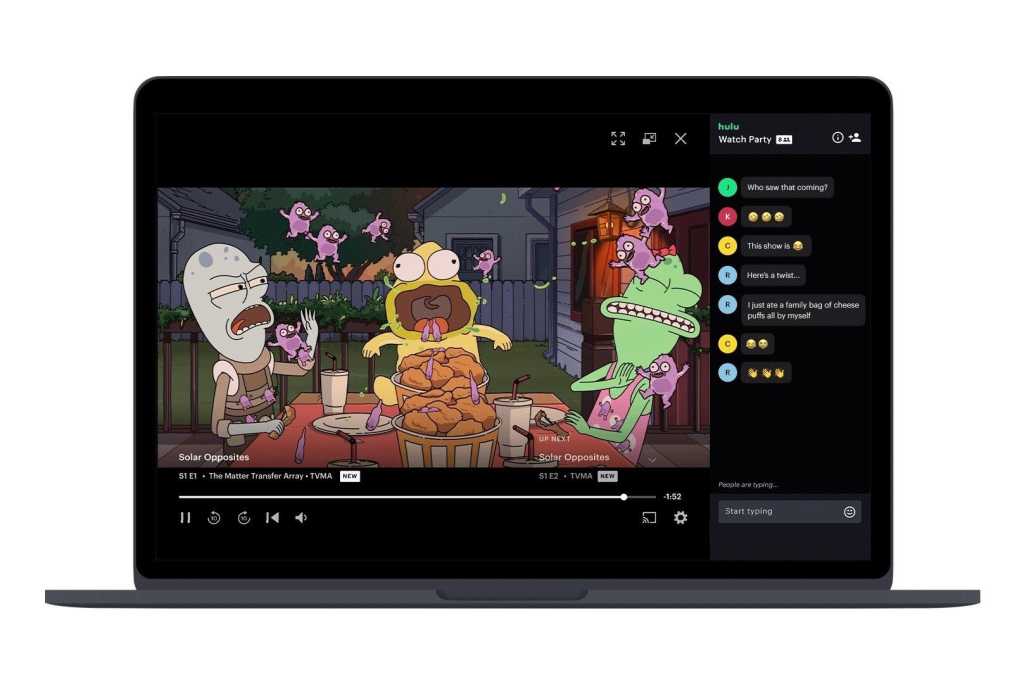 Streaming videos together while we’re apart has (unsurprisingly) become a popular pastime while the world hunkers down during the pandemic, and now two of the biggest streaming services are joining the “watch party” craze.

Hulu Watch Party is, for now, only available on Hulu.com, and only if you’re subscribed to Hulu’s $12-a-month plan, which lets you watch ad-free videos. Update (December 2, 2020): Hulu Watch Party is now available for all subscribers, including those signed up for Hulu’s $5.99-a-month “with ads” plan.

To launch Hulu’s Watch Party feature, you just click the “Watch Party” icon on the Details page of a given video. Once you do, you’ll be able to invite other viewers by sending them a link. Users must be 18 or over to start or join a watch party (better have your ID handy), and everyone in the group will need to be subscribed to Hulu’s $12/month subscription tier.

Those in the watch party will be able to chat during the stream, as well as pause the video independently and then catch up to the group by clicking a button.

Hulu says that “thousands” of TV shows and movies will support the Watch Party feature; in other words, not every title in Hulu’s on-demand library will offer “Watch Party” functionality.

Meanwhile, popular DVR and media-streaming service Plex just announced a beta version of its “Watch Together” feature, which (you guessed it) lets Plex users watch movies and TV shows together. In addition to being able to stream videos from Plex’s free, ad-supported “Movies & TV” library, users can also party up to watch content from their own Plex media libraries.

Plex’s Watch Together feature is free for all users (no Plex Pass required), and it’s available on the Plex apps for Android, iOS, Android TV, and Apple TV, as well as on Amazon Fire TV, Nvidia Shield TV, and Roku devices.

Plex’s still-in-beta Watch Together feature lacks integrated chat, however, and if one member of the group pauses the video stream, it’ll be paused for everyone else, too. Also, “Watch Together” users who are streaming a free ad-supported video from Plex’s on-demand movie and TV library will have to wait while everyone in the group finishes watching a commercial break.

To launch a Watch Together session, just tap the three-dot “more” button from a video’s detail page, then select the “Watch Together” option. You can invite anyone to the group as long as they’re your Plex friends list.

Updated on December 2, 2020 to note that Hulu Watch Party is now available to all Hulu subscribers.