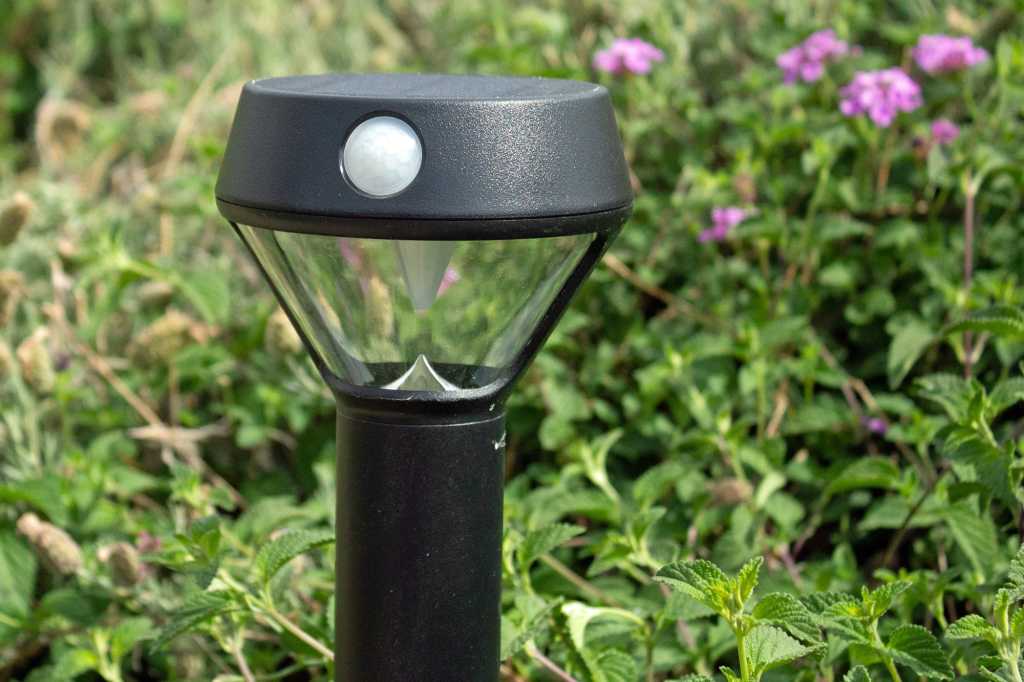 The Ring Solar Pathlight is everything we loved about last year’s Ring Pathlight, minus the need to buy lots and lots of disposable batteries.

The solar version of the Ring Smart Lighting Pathlight eliminates the number-one reservation I had about the original version: The lifespan of its four D-cell batteries. And after an 11-month deployment of the first-gen product, I’m much less concerned about my second reservation: The durability of its all-plastic construction.

A photovoltaic panel occupying nearly the entirety of the Ring Solar Pathlight’s 3.5-inch top trickle-charges a 3.7-volt lithium ion battery inside. If you don’t get enough sunlight to keep the battery charged, you can detach the top of the light and bring it inside to charge with a micro-USB cable. The cable comes in the box, but you’ll need to provide your own AC adapter. The light arrived with enough power to set up and pair with the Bridge, but Ring recommends giving it a full charge with an AC adapter before permanent installation, and I followed that advice.

This review is part of TechHive’s coverage of the best smart lighting, where you’ll find reviews of competing products, plus a buyer’s guide to the features you should consider when shopping.

As with the original Pathlight, the Pathlight Solar connects to your Wi-Fi network (2.4GHz only) via the Ring Bridge. This review assumes you don’t already have that component, so the Amazon link above is for the two-light starter kit that includes the Bridge. If you do have the Bridge, the Pathlights are available on their own for $35 each. That’s just a $5 premium over the original version—less than the cost of the batteries you’ll need to power the original. I’ve already replaced one set of batteries in the two first-gen Pathlights I’ve been using, and the Ring app indicates the second set are now down to 37 percent.

The Pathlight Solar certainly looks brighter than the first-gen product, but Ring says both devices generate a modest 80 lumens of brightness—sufficient to cast a circular pool of light about eight feet in diameter (the light can be dimmed, if so desired). Their light is also the same color temperature: A cool 3500K. Apart from the larger cap needed to host the solar panel, the bollard-style Pathlight Solar looks very similar to the first-gen product, measuring 16.8 inches high by 4.33 inches in diameter compared to 16.93 x 4.13 inches for the original. The original’s plastic housing looks no worse for wear after nearly a year’s exposure to the weather, so I’m sure the new model will be just as durable.

You can schedule the lights to turn on based on a schedule (hours of the day, days of the week, dusk to dawn, or dusk to a specified hour. And multiple schedules are supported.) There’s a tunable motion sensor onboard with 15 feet of range and a 120-degree field of view (very slightly narrower than the original’s 140-degree field of view). By “tunable,” I mean you can adjust the sensor’s sensitivity to movement (low, medium, high, or custom—by using a slider). If you rely on the motion settings alone to turn the lights on, you can program them to automatically turn off after an elapsed time: 30 seconds, one minute, three minutes, or five minutes.

That sensor can trigger the light to turn on based on a user-defined schedule; more importantly, the Pathlight Solar can trigger other components in the broad Ring ecosystem to do things: You can have any Ring cameras record video in response to motion in front of the Pathlight, and you can program other Ring Smart Lighting devices to turn on.

Now that Ring has smart light bulbs, in addition to lighting fixtures, anyone walking past the Pathlight can trigger lights to come on inside your home as well as outside. If you’re away from home, this is a great way to trick a potential intruder into thinking someone is home and that the intruder has been spotted. An ambient light sensor will prevent the Pathlight from turning on during daylight hours, and you can use a slider to adjust its sensitivity as well (the higher the sensitivity, the earlier the light will turn on).

It’s worth noting that the Ring Bridge can support a maximum of 50 Ring devices, but not every Ring device depends on it. Some products, such as the Ring Floodlight Camera and the Ring Video Doorbell, connect directly to your Wi-Fi network. Smaller devices, such as the door/window and motion sensors used with the Ring Alarm system, communicate over Z-Wave. In those cases, the 50-device limitation doesn’t matter. Speaking of Ring’s door/window sensors, however, it’s also worth noting that you can’t program those devices to turn on Ring Smart Lighting products when they’re tripped. If you want Ring’s Pathlights to turn on when you open a door, you’ll need to deploy something like the Ring motion sensor near the door.

If you’re just looking for solar-powered path lighting that automatically turns on at night and charges its batteries while the sun is out, there are much cheaper options than the Ring Solar Pathlight. These alternatives won’t be as bright (expect 4 to 10 lumens, compared to the Ring’s 80 lumens), and you won’t be able to tie them in to any smart home system), but you’ll be able to buy them in six packs for what Ring expects to fetch for one of its lights.

Likewise, if you’re looking for outdoor lighting to show off your landscaping at night. Ring’s Smart Lighting product line is still focused on security, not ambience. Products in the Philips Hue line serve that role much better—and since they don’t rely on batteries, they’re much brighter.

So, why the Editors’ Choice award for the Ring Solar Pathlight? Because as much as we liked last year’s battery-powered Ring Pathlight, the solar-powered model is even better. And Ring’s ecosystem has become even broader and deeper since we reviewed the first-gen product around this time in 2019. That said, you’ll derive the most benefit from this product if you own or intend to buy other Ring products—especially its security cameras.