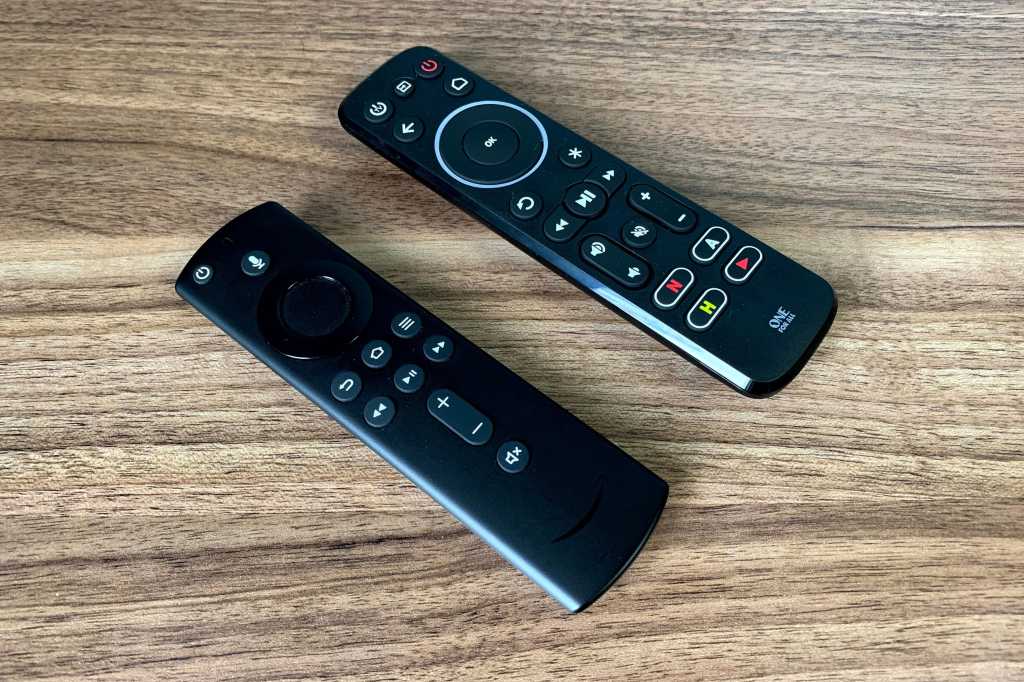 It’s all too easy to overlook the quality of the remote control when picking a streaming device, as I’ve written before.

You might not realize it from the price tag, for instance, but the $180 Apple TV 4K has one of the worst remotes on the market. The slim design too easily slips between couch cushions, and its trackpad-based controls have a steep learning curve. Conversely, the $29 Roku Express seems like a great value until you realize that its remote lacks basic TV controls.

What’s a cord-cutter to do, then? If you’re stuck with a bad remote, consider a third-party replacement instead of buying an entirely new streaming device. Here are a couple options I’ve come up with:

My impetus for this little experiment was One For All’s URC 7935 universal streamer remote. A few weeks ago, I spotted it on sale for $15 at Best Buy, down from the regular $25, so I decided to see how it would work as a replacement remote for Apple TV and Roku players. At the time this story was edited, Walmart was selling a version of the URC 795 for $17, and eBay has open box ones for even less.

What drew me to the One for All remote was its design, which looks like it’s meant for streaming instead of cable. The layout of the directional pad and navigation buttons are similar to that of a Roku remote, and there are no number keys or other unnecessary cable remote clutter.

Out of the box, the remote works with any Roku player that supports infrared input. Those include the high-end Roku Ultra and the budget Roku Express and Premiere models, but not the Roku Streaming Stick or Stick+. It can also control power, volume, and inputs on Samsung TVs by default.

To use the One for All remote with other devices, you have to enter specific button combinations as outlined in the instruction manual. Pairing an Apple TV, for instance, requires holding down the streamer power button and home button, then letting go and holding down the TV power button. It’s a clunky process, but the upside is that you can program a streaming box, TV, and A/V gear to work simultaneously. That means you can consolidate remotes without having to fiddle with HDMI-CEC.

With setup out of the way, I was impressed with the remote overall. While infrared is inherently less responsive than the Bluetooth connections used by most streaming remotes, I didn’t have any issues controlling my Apple TV 4K, even outside my home office from 20 feet away. The rubberized buttons feel snappy, and unlike with most streaming remotes, they’re backlit.

The One for All remote’s main downside is that it doesn’t support voice control. For that, you’ll need to reach for the regular Apple TV or Roku remote. (You can also use the Roku remote app or the Apple TV remote function built into iOS.)

Still, the remote’s other features make up for missing voice control. It has dedicated buttons for mute, input control, and channel switching. (The latter two come in handy if you’re using an antenna.) It also has Roku-compatible shortcut buttons for Netflix, Amazon Prime, Hulu, and YouTube. The version Walmart sells substitutes Vudu for the Amazon shortcut (Walmart owned Vudu until its recent sale to Fandango).

While Roku’s own remotes come with shortcut keys as well, those are sponsored placements that you can’t modify. By contrast, you can program the One for All remote’s shortcut keys with macros that string a series of button presses together. These macros even work with Apple TV, so I programmed each one to return to the home screen, then launch various apps.

I was hoping the One for All remote would also work with the 2017 Nvidia Shield TV in our living room. The touch-sensitive volume control strip on the Shield’s remote is a constant source of frustration for my wife and I—along with anyone who’s visiting—and as with the Apple TV remote, its slim design is too easily lost. (The 2019 Nvidia Shield TV remote is, thankfully, much better.)

Unfortunately, I couldn’t get the pairing to work, even though One for All lists Nvidia support in its product listings and manual. That’s when I remembered hearing rumblings about how the Shield TV works with Amazon’s Fire TV remotes. With a couple of Fire TV Stick 4K devices on hand here, I decided to check the combo out myself.

To pair a Fire TV remote with the Shield, you must visit Settings > Remotes & Accessories > Add Bluetooth accessories, then hold the Fire TV remote’s home button for about 10 seconds until a light begins blinking rapidly at the top. At that point, a new device should appear in the Shield’s pairing menu, and you can use an existing Shield remote to select it.

Again, the pairing process could have been smoother—I had to try this a few times before it worked—but the Fire TV remote has worked flawlessly with the Nvidia Shield TV ever since. Because Amazon’s Fire TV operating system is based on Android, the Shield recognized all the remote’s buttons without issue.

While some users have reported problems in the past with waking the Shield or using voice commands, I experienced no issues with either, and was pleasantly surprised to see the Fire TV remote’s Alexa button bring up Google Assistant on the Shield. Best of all, the Shield supports reprogramming the Fire TV remote’s menu button, just like the menu button on the 2019 Shield TV remote. I’m using it to launch the Reelgood beta app for Android TV, which functions as a universal guide for streaming services.

It’s worth noting that you can buy the 2019 Shield TV remote as a standalone upgrade for older models, and at $30. It costs the same as Amazon’s Fire TV remote. It’s not quite as comfortable to use, but it does have backlighting.