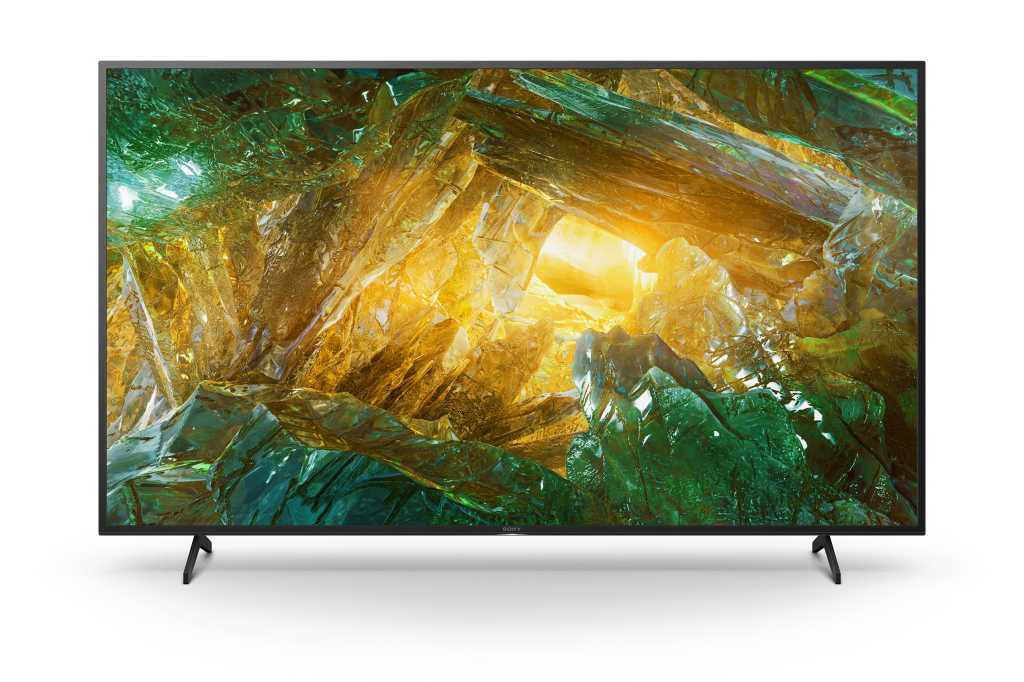 Sony’s X800H is a very good TV for the price, and the interface and newly redesigned remote control make for a most pleasant user experience. But poor black reproduction takes some of the sheen off of the otherwise very good image handling.

Sony’s new X800H is a major improvement over last year’s G model, with interface tweaks and more powerful processing. Dolby Vision HDR and Dolby Atmos have been added to the mix, along with a redesigned remote control that finally looks like something that belongs with a Sony TV.

With social distancing measures in place, my testing has been relocated from the TechHive lab to my home office, where the 65-inch X800H ($1,000) that Sony sent me for evaluation made for a tight squeeze. I’m guessing Sony sent this size because the 55-inch and smaller models don’t have the fancy almond-shaped X-speakers that increase audio quality. I didn’t hear the have-nots, so I can’t comment on the difference, but the 65X800H’s audio is definitely a step above the norm in this price range.

The look of the 800 series is merely average, with a plain frame and v-shaped legs. It’s  sturdily constructed overall, though there’s quite a bit of flex in the bezel. The 65-inch model I reviewed weighs just about 50 pounds with the legs, and measures a hair less than 3-inches thick. All models feature a VESA mount point.

All sizes feature a 60Hz, 3840×2160 (4K UHD) panel. The 55-inch and larger sizes feature direct LED backlight (with no local dimming), while the two smallest sizes are edge lit. The color technology is Sony’s standard Triluminos, and the X800H supports HDR10 and HLG high dynamic range content in addition to the aforementioned Dolby Vision.

[ Further reading: How to calibrate your TV ]

New to the 800 series this year are Dolby Vision HDR and Dolby Atmos surround. Other supported services include Google Assistant, Amazon Alexa, plus Apple’s AirPlay 2 and HomeKit. Being Android-based, you can also mirror your phone to the TV.

This year’s X800H iteration now has the full-on Android TV interface rather than a light version. It’s also now embedded in the processor for more agile performance. However, it’s still Android TV, which while attractive and easy to use, generally requires quite a bit of navigating about the homepage.

Sony, bless its heart, had a small stroke of genius and decided to let you add apps to the input list. You may also remove unused items or inputs. One press of the input button and your favorite stuff, and only your favorite stuff is right there. If you only do one or two things with your TV as I do, you’ll love it.

Of course, when you do feel like snooping about the homepage, you can’t beat Android TV for the sheer number of apps it offers. It is after all, the same Android (mostly) that’s on your phone.

Sony has also done some work on the settings menu, with inline help explaining the settings, along with some explanatory images. Now if it would just separate “Display & Sound” and move them up one level, I’d be a real happy camper.

The long overdue remote control redesign shows some of the same directness as the user input assignments. Physically, it’s far thinner and slimmer, though at 9-inches, it’s still a bit on the long side. Of course, that makes it harder to lose track of.

Along with a new svelte shape, the remote uses straightforward four-way cursor ring, replacing the previous model’s overwrought ring of six barely related functions. The new face-plate is classier looking and the buttons are raised well above the surface, making it a breeze to navigate by touch. If touch won’t do it, there’s also voice control. All in all, much simpler and easier to use.

I don’t know what has changed at Sony, but it’s had a very positive effect on the user interface.

The 65-inch X800H’s overall image with most material is in most ways within hailing distance of some of Sony’s more expensive TVs. Whatever the company did with the motion compensation, kudos. If I didn’t know otherwise, I might’ve mistaken this for a 120Hz set, despite the low price (for Sony). It’s hands-down the smoothest image I’ve ever seen from a 60hz set when the settings are tweaked.

There was also a lower incidence of moire and shimmer than with most of the competition. The lack of zone dimming in the array back-lighting helps with that. However, more than a little credit for both the motion quality and lack of pattern defects should go to this year’s upgraded processor and database of image enhancements.

Color accuracy and saturation are quite good, if not quite as accurate as with quantum dot sets. But anyone who swears by the Sony color profile, and there are many, will be pleased.

The X800H’s weakness—one that it shares with all LCD TVs that lack local dimming (which changes the intensity of backlight behind darker image areas)—is that it doesn’t do black very well. Instead you get dark gray, and it’s not always that dark. This also affects contrast. In everyday viewing, this only noticeable in a very small percentage of material, but it’s quite noticeable when you view a night sky or starfield.

HDR is rendered to decent effect given the contrast issue. You can definitely see more pop in laser effects, etc. However, it’s not nearly as vibrant as you’ll see with TVs with local dimming. Or OLED of course.

Sony’s HDR remastering is a real-time process that seeks to endow HDR10 rendering with the benefits of dynamic metadata, i.e., frame-by-frame or scene-by-scene adjustment of color contrast. Dynamic metadata is part and parcel of Dolby Vision and HDR10+. It did appear to make a slight difference in overall dynamic range, though to a very slight degree due to the X800H’s contrast limitations.

Sound, as I mentioned up top, is certainly better than what you’ll hear from the majority of $1,000 65-inch TVs. You won’t immediately feel the need for external audio gear, though that desire might creep up on you. Sadly, because the Bluetooth implementation doesn’t appear to support output (I tried linking several BT audio devices), you can’t use headphones without an external Bluetooth transmitter running off the headphone output.

There’s no 65-inch TV at this price point that I know of with better features than the X800H, Bluetooth excepted. However, it’s also the first 2020 TV I’ve tested and the competition below $1,000 is extremely fierce. That said, the X800H should hold its own: the app/input assignment tweak is gold, and overall image and experience will definitely please those in search of that certain something Sony TVs deliver.