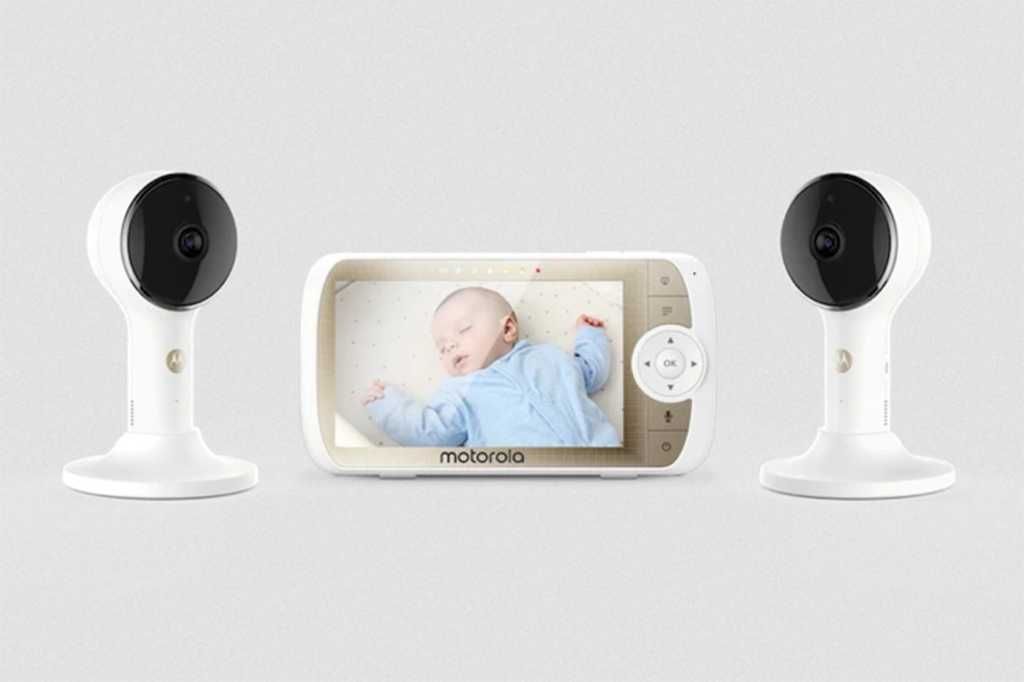 Image: Motorla
At a Glance

The Lux65 Connect-2 is a great starter kit for new parents, but be aware you have to purchase a cloud subscription to unlock its best features.

Motorola’s Lux65 Connect-2 is the latest entry in the company’s Hubble Connected ecosystem. It’s an impressive—and predictably pricey—system that can operate as both a conventional video baby monitor and a more feature-rich smart camera.

The Lux65 includes two Full HD (1080p) cameras and a handheld monitor, called the parent unit. The first thing you’ll notice is the care Motorola put into them. Many baby monitors seem built to last no longer than your child is crib bound. The Hubble Lux65 components, though, feel well-crafted and durable and they’ve been trimmed with eye-catching silver and gold accents.

Each of the cameras supports two-way audio infrared night vision, allowing you to listen and speak to your baby and see them easily even after the lights are out. The parent unit provides digital pan-and-tilt and zoom functionality as well as temperature monitoring and a library of lullabies, soothing sounds, and audio books to ensure a cozy sleeping environment for your little one.

The parent unit runs on a rechargeable lithium ion battery. Motorola recommends charging it for at least 16 hours prior to first use. A full charge should give you about 5 hours of operation.

The cameras and parent unit come pre-paired, so once the parent unit is charged, all you have to do is plug in all three components and turn on the monitor to get a picture. The cameras can be set on a flat surface or mounted to a wall using the supplied screws. Each camera attaches magnetically to its stand and can be easily angled for best line of sight.

The monitor weighs less than a quarter of a pound, so it’s easy enough to tote around with you, and a kick-out stand on the back allows you to set it upright on a table or nightstand. Power, push-to-talk, menu, and sleep buttons run down the right side of the monitor along with directional pad. The last gives you basic control of the cameras. You use the directional buttons to digitally pan and tilt the current camera’s image and press the OK button to toggle between cameras. Double-tap the same button, and the camera views will automatically alternate every few seconds. You can also view both cameras simultaneously in split-screen mode by activating this feature in the menu settings.

Despite the cameras’ Full HD resolution, the parent unit uses a standard LCD, which doesn’t offer the crystal clarity and color richness you’ll get from your smartphone screen. Still, it’s sharp enough to let you discern your child’s movements and facial expressions, and you can clearly see the landscape of the room they’re in.

A series of indicators are constantly displayed across the top of the screen, showing you the signal strength, room temperature, and number of the camera currently being viewed, as well as the monitor’s battery level.

Pressing the menu button displays a tool bar across the bottom that gives you access to various settings, such as monitor brightness and a sleep timer, as well as features like digital zoom and the audio library.

There are 10 sounds ranging from lullabies like “Twinkle Twinkle Little Star” to bird song to white noise, and 10 children’s stories including David McKee’s “Not Now Bernard” and David Lucas’ “Halibut Jackson.” These are read in a kid-friendly style by both male and female narrators. There’s also an option to record your own voice singing a song or reading a story.

Like the Motorola Halo+ baby monitor we reviewed previously, the Lux65 works on Motorola’s Hubble Connected platform, so you can operate the cameras and view their feeds using the Hubble for Motorola Monitors smartphone app or by logging in to the Hubble Connected web portal. Each camera must be added individually to the app, which prompts you through the process of connecting first to the camera and then to your home network. 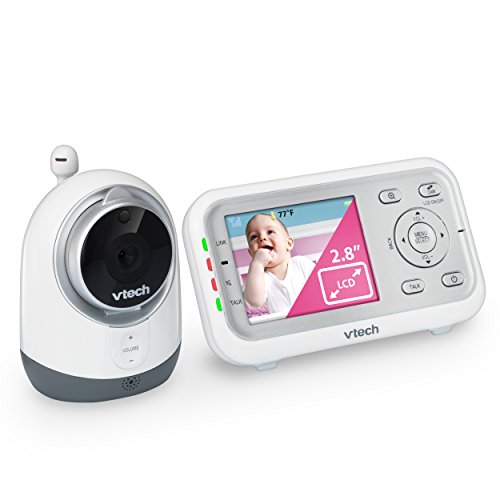 Hubble Connected gives you the same control over the camera as the parent unit but also lets you capture and review motion- and sound-triggered video. This enables you to be alerted via push notifications of your child’s activity without being glued to a screen. The app gives you plenty of flexibility for managing alerts, too, including sensor adjustments and a scheduling option.

Hubble Connected also unlocks insights into your baby’s behavior. Hubble’s Sleep Insights Service can recognize when your baby is in her crib and capture and analyze her movements using a cloud-based algorithm. This is displayed as easy-to-understand visual data on sleep patterns, movements, and sleep quality.

These advanced features, however, come at a cost. To activate them, you must subscribe to one of three Hubble Connected plans. Lite gives you 5 days of cloud recording for one camera for $30 a year or $3 a month. Essentials offers 14 days of recording for up to 10 cameras and adds daily summary video of the past 24 hours of activity for $100 annually or $10 monthly. Select bumps it up to 30 days of recording for up to 15 cameras, plus the daily summary for $150 a year or $15 a month. All of these plans include SmartZone motion detection, a feature that lets you set a custom area within each camera’s field of view for motion-triggered video capture and notifications. A free trial is included with the camera, so you can try these features out and decide if you want to invest in them for the long term.

The Lux65 is a great way to keep an eye on your baby or small child, but $184 for what is basically a conventional video baby monitor without a Hubble Connected subscription is a little steep. Considering you need one of those subscriptions to unlock all the Lux65 has to offer, you’re looking at an initial outlay of more than $200, plus the recurring annual subscription cost. If that’s beyond your budget, something like the VTech VM3251 Expandable Digital Video Baby Monitor will give you most of the same basic features without the Wi-Fi capability for less than $100.