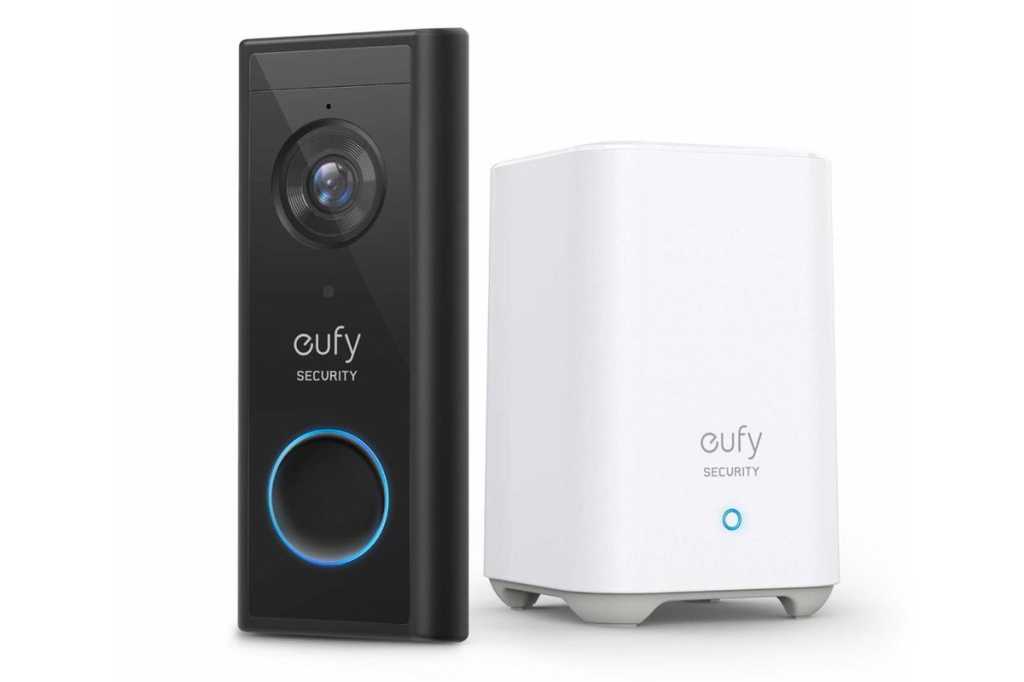 Image: Eufy Security
At a Glance

The Eufy Security Wireless Video Doorbell delivers a great set of features, and its accompanying Homebase storage unit will eliminate the need for a cloud-storage subscription—at least for most people.

If you object to dropping $100 to $200 for a video doorbell only to find out that you need to pay for a subscription to derive the full benefit from it, you’ll want to take a gander at the Eufy Security Wireless Video Doorbell. If you’re not familiar with the brand, you might know its parent company, Anker.

We like Eufy’s battery-powered doorbell camera even more than we do its wired model, the Eufy T8200 that we reviewed in October, 2019. The doorbells themselves look remarkably similar and have nearly identical specs, including video resolution of 2560×1920 pixels, support for high dynamic range, and a 4:3 aspect ratio that provides a tall field of view. That said, we think the Arlo Video Doorbell’s 1536×1536 resolution and 1:1 aspect ratio does an even better job of ensuring that you see packages left on your doorstep.

Eufy claims the doorbell’s battery should last for six months with typical activity. I didn’t test it for that long, but the battery was still going strong for me after two months of high traffic on my porch. If you have an existing wired doorbell, you can opt to swap it out for Eufy’s product, in which case the doorbell will use your existing chime and you won’t need to worry about recharging the battery.

Local storage means no subscription (unless…)

Both of Eufy’s doorbells store their video recordings locally, all but eliminating the need for a cloud-storage subscription. But where the wired model has 4GB of storage on the device itself, the battery-powered model reviewed here relies on a separate NAS-box-like Homebase with 16GB of solid-state memory. That proved to be more than enough storage for many weeks of recordings of visitors coming to my front door (Eufy says it should be enough for 180 days of recordings).

You can download videos to another device via the app should you need forensic evidence of a crime or what have you. And storing video on a device inside your home is more secure than storing it on the doorbell itself—if someone steals the doorbell, they steal your forensic evident, too. With the Homebase, they’d need to break into your home and know to take that component with them.

You can use the Homebase with other Eufy wireless security cameras, though, so that 16GB might become an impediment if you sprinkle several other Eufy cameras around your home. And it just so happens that Eufy does offer a subscription service if you need more storage: A Basic plan gives you 30 days of storage in the cloud for one camera for $3 per month or $30 per year. The Premier plan provides the same video history for up to 10 cameras for $10 per month or $100 per year.

The Homebase also serves as the video doorbell’s chime unit, loudly announcing when someone rings the bell. The two components communicate over their own dedicated wireless network using a 256-bit encrypted connection. If there’s a drawback to the Homebase, it’s that it must be hardwired to your home network’s router. (Correction, June 23, 2020: An astute reader who has purchased this doorbell discovered a poorly documented feature that allows it to be connected to your home network wirelessly). It of course must also be plugged into an AC outlet.

I found the camera’s motion detection features to be excellent. It can usually distinguish between a person moving in its field of view and something else—a dog or a cat, for example—and it was very accurate in my testing. But the camera doesn’t have AI that drills down deeper than that. It doesn’t use facial recognition technology to distinguish between familiar faces and strangers.

Eufy’s app alerts users to a visitor’s presence almost instantly. You can opt to ignore a notification, answer it, or play a canned message. Basic connectivity with screen-equipped Amazon Echo Shows and Google Home Hubs lets you view the live feed, but not much else. You can also enable the Alexa skill to allow Echoes to announce when the doorbell is pressed, but there currently isn’t a similar skill for Google Assistant.

The camera captures activity in generally sharp detail, both day and night. Stills taken from movement footage did tend to look slightly grainy, but overall video and audio quality are quite good.

At $200, the Eufy Security Wireless Video Doorbell is a little more expensive than our top in both the categories of battery-powered doorbell (the Ring Video Doorbell 2) and wired video doorbells  (the Arlo Video Doorbell). But you’ll need to for a subscription for either of those devices if you want to get the maximum value from them. That said, we’re not quite ready to name this product our top pick in the former category, because we’ll soon get our hands on the all-new Ring Video Doorbell 3.

Updated May 1, 2020 to report that the Ring Video Doorbell 3, reviewed today, didn’t sufficiently impress us to name it our favorite battery-powered video doorbell, so that distinction now belongs to Eufy’s product.