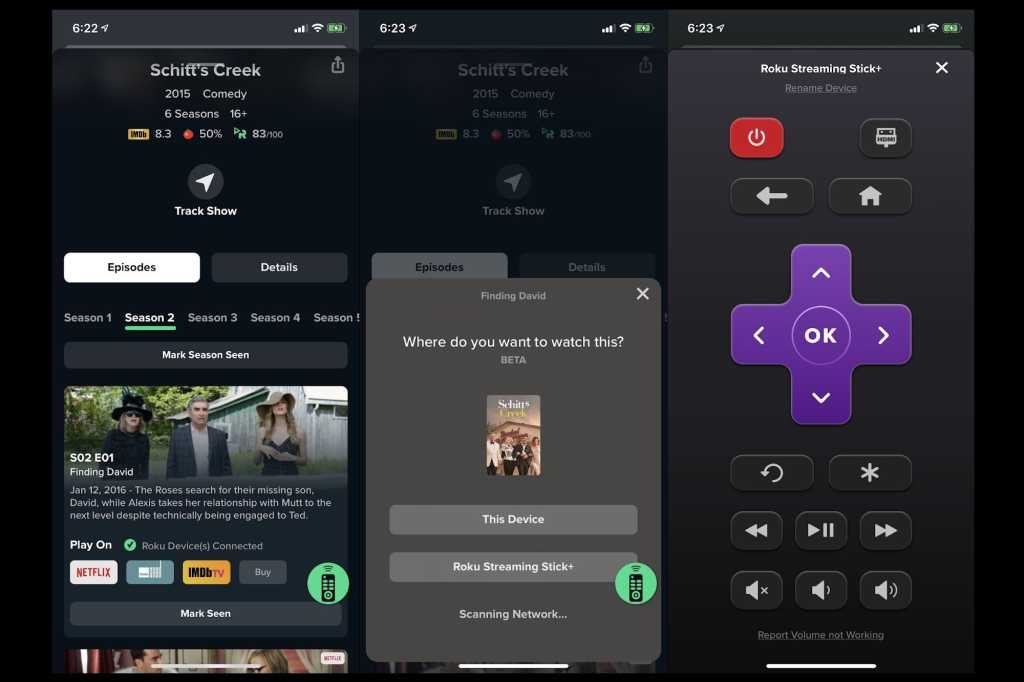 Unification is the predominant theme for cord-cutting in 2020. Rather than bouncing between a half-dozen or more streaming apps, we’ll see more attempts at funneling all our subscriptions into one big TV guide.

The latest effort comes from Reelgood, which just released a nifty new remote control feature for Roku devices. When you find something to watch in Reelgood’s streaming guide apps for iPhone or Android, you can press a button and launch the video directly on your Roku player or smart TV.

I’ve been using a pre-release version of Reelgood’s new iPhone app this week (the Android version is already available), and while I ran into some issues with a handful of services, it worked flawlessly with content from Netflix, Hulu, Amazon Prime Video, Disney+, Tubi, and Crackle. Roku itself doesn’t provide anything like this, so using Reelgood’s remote app might be even better than navigating with an actual remote.

If you’re not familiar with Reelgood, the app provides universal search, recommendations, and a watchlist for your streaming services. Select the services that you use, and you can browse for movies and shows across all of them at the same time. Reelgood will also tailor its recommendations over time based on what you’ve added to your watchlist.

In the past, Reelgood was siloed off from streaming devices such as Roku players or Amazon Fire TV Sticks. You could use Reelgood’s mobile app or website to track shows or get recommendations, but ultimately you’d still have to pick up a separate remote and wade through a bunch of menus to reach the actual content. (One exception: You could use Reelgood to launch other videos apps on your phone, then launch video on your TV via Chromecast.)

With the remote control feature, Reelgood is no longer an island. You just select a movie or show in the Reelgood app, then select any Roku on your Wi-Fi network for playback. Roku will then launch the appropriate app and load the movie or show you’ve selected. Reelgood’s mobile app even provides a virtual remote control, so you can pause, fast forward, or rewind without reaching for the physical Roku remote.

Eli Chamberlin, Reelgood’s head of product and design, said via email that the company is using some trickery to make this happen. When you select a movie or show in the mobile app, Reelgood transmits a set of identifiers for that content to the Roku, similar in nature to links on the web. Roku doesn’t officially provide this data to app makers, so Reelgood has done a lot of data mining to figure out which identifiers will prompt a particular video to launch.

“We have indexed so much content from various services, along with many different types of content identifiers, that we can construct many different permutations of these links to see what works,” Chamberlin said. “We’re currently wading our way through each and every service, combining different data we collect to get ones that launch the content successfully.”

The hacky nature of Reelgood’s approach might explain why it doesn’t yet work with every streaming service.

When I tried playing videos from HBO Now, for instance, my Roku Streaming Stick+ would only launch into the app and progress no further. The NBC app refused to launch through Reelgood at all, and trying to select Apple TV+ videos resulted in a “content unavailable error.” Most strangely, Food Network Go would repeatedly load the detail page for Iron Chef America Season 10 Episode 27 regardless what show I’d actually chosen.

Chamberlin said Reelgood was already aware of those issues when I brought them up, and promised fixes shortly, but I wouldn’t rule out more glitches with other streaming services in the future. Reelgood’s guide itself also has some blind spots that prevent it from completely replacing your remote. You can’t use it to launch live channels from services such as YouTube TV or AT&T TV Now, and it doesn’t surface content from Pluto TV. You also can’t use it to browse user-generated content on sites like YouTube.

For now, though, Reelgood’s app is still a convenient way to browse the holy trinity of Netflix, Hulu, and Amazon Prime, along with several others. And it’s coming to other devices soon. Chamberlin said Reelgood is beta testing Android TV and Amazon Fire TV apps now, with plans to launch them in early May; those won’t require you to use the mobile app at all. (If you happen to have an LG WebOS TV, Reelgood already offers a native app there.)

Battle of the guides

Reelgood is not the only one offering this kind of aggregation.

One of its main rivals, JustWatch, launched its own guide apps on Apple TV, Amazon Fire TV, and Android TV late last year. Like Reelgood, you can use JustWatch to create a watchlist and get recommendations across multiple streaming services, including Netflix, Amazon Prime, Disney+, and Hulu. (Unlike Reelgood, JustWatch has no solution for Roku devices.)

TiVo is also preparing to launch its own Android TV-based streaming dongle called the TiVo Stream 4K. Its main hook is a TV guide that pulls in video from lots of different streaming sources. The company told me earlier this month that it’s still on track to launch the device soon.

These offerings, I hope, are a precursor to the streaming platforms themselves getting more serious about streaming unification. Apple TV already does a fine job with this through its TV app, but it really needs to integrate Netflix into its watchlist feature. Amazon offers recommendations on its Fire TV home screen, but it leans too heavily into its own Prime content and sponsored listings, and it lacks any kind of universal watchlist. The “channel row” concept on Android TV devices is useful, but it too is missing the kind of watchlists that Reelgood and JustWatch already do so well.

As for Roku, I’d love to see the company take a meaningful stab a creating its own unified streaming guide, but for now it seems more interested in promoting a narrower range of content through its own Roku Channel app instead. That’s a shame, but at least Reelgood can help compensate.