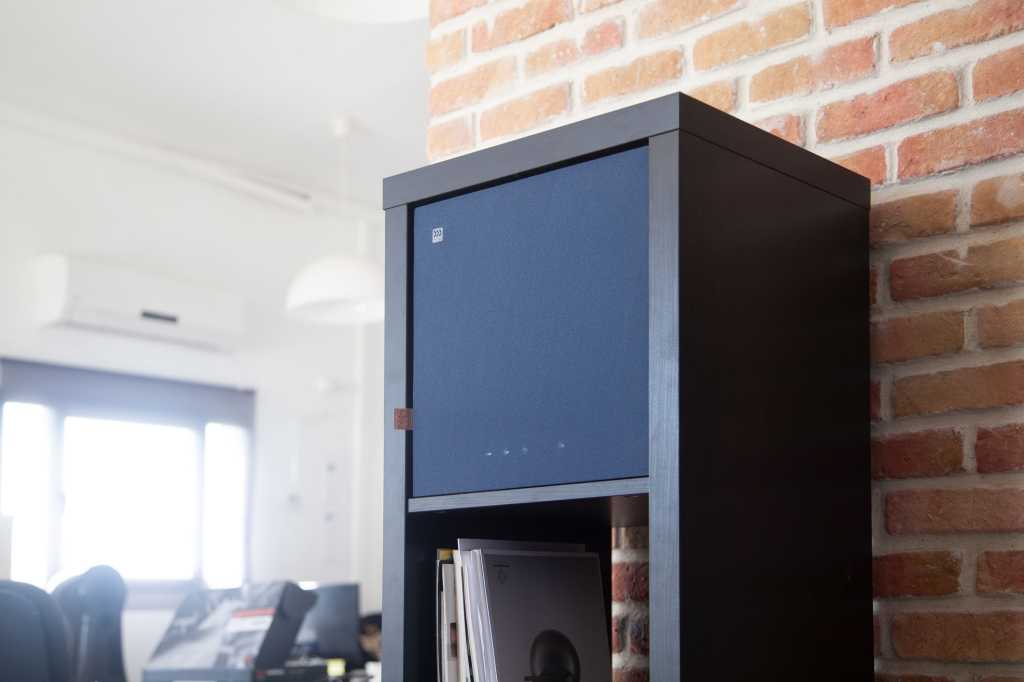 Morel
At a Glance

This Bluetooth speaker offers a great combination of power and precision, with left and right channels in a single, Ikea-friendly box.

At 12.9 inches square and 6.7 inches deep, the Högtalare fits perfectly into one of your Kallax’s cubes. The system is available in five colors (two are variations on white) to give you a stylistic match, as well (at least on the face of the speaker, which is all you’ll see if installed within an Ikea unit).

The Högtalare—Swedish for “speaker,” of course—consists of a single 6-inch double-magnet woofer and two 1-inch dome tweeters, with three amplifiers delivering 50 watts per channel. This is a single-cabinet stereo system in which one tweeter handles the left channel and the produces the right channel). Stated frequency range is 36Hz to 20,000Hz.

Högtalare is a Bluetooth speaker foremost, and primary connectivity is courtesy of Bluetooth version 4.2 with support for Qualcomm’s aptX codec. If you have two Högtalare speakers, they can be configured via Qualcomm’s TrueWireless Stereo (TWS) technology to each play only the left or only the right channel, giving you a more traditional stereo sound design, and likely a better option for larger spaces (having received only one unit, I wasn’t able to test the Högtalare’s TWS performance).

If Bluetooth isn’t an option, you’ll find an auxiliary jack and a Wi-Fi enabled USB port into which you can plug in a Chromecast audio puck or similar device and connect the Högtalare directly to your Wi-Fi network.

Aside from a switch on the reverse that lets you swap between manual and automatic power-up, all hardware controls are front-facing, hidden beneath the speaker grill. Those include a power button, volume controls, an input selector, and a Bluetooth pairing button. I paired the system to various devices and never encountered even a modest hiccup along the way.

Performance-wise, the Högtalare was outstanding in my testing. I was skeptical that putting a left and right tweeter within a foot of each other would offer any semblance of a true stereo experience, but I was happy to be proven wrong. Yes, it’s clear that, even in a small room, all the sound is coming from one location, but the Högtalare makes up for this with a ton of raw power that effectively bounces audio off the walls and simulates a more realistic stereo experience.

I found that music (of just about any type) was more immersive than movies or games, the clarity of the Högtalare making for an exceptional musical experience, showcasing thunderous bass drum snaps, jangly tambourine, and even glockenspiels I’d never heard before in some of my favorite songs. Vocals, particularly, are downright amazing. I think the bass is a bit clearer than the highs, but the delta here is small. Altogether the quality is far beyond that of the typical Bluetooth monitor – and, again, the system is extremely loud at full volume.

The only serious complaint I had with the Morel Högtalare was some skipping—a momentary disconnection—that I experienced during my first day of testing over Bluetooth. I encountered this from connections with two different devices (but not a third), so while I can’t rule out a problem on my devices’ end or in my environment, that seems a bit coincidental. The good news: I was able to resolve this issue by “forgetting” the connection to the device and re-pairing the two.

At $349, the Högtalare is competitive with other high-end bookshelf systems, though if you want two units, that calculus changes quite a bit. On the whole, I wouldn’t hesitate to recommend it to any audiophile—whether you’re also an Ikeaphile or not.