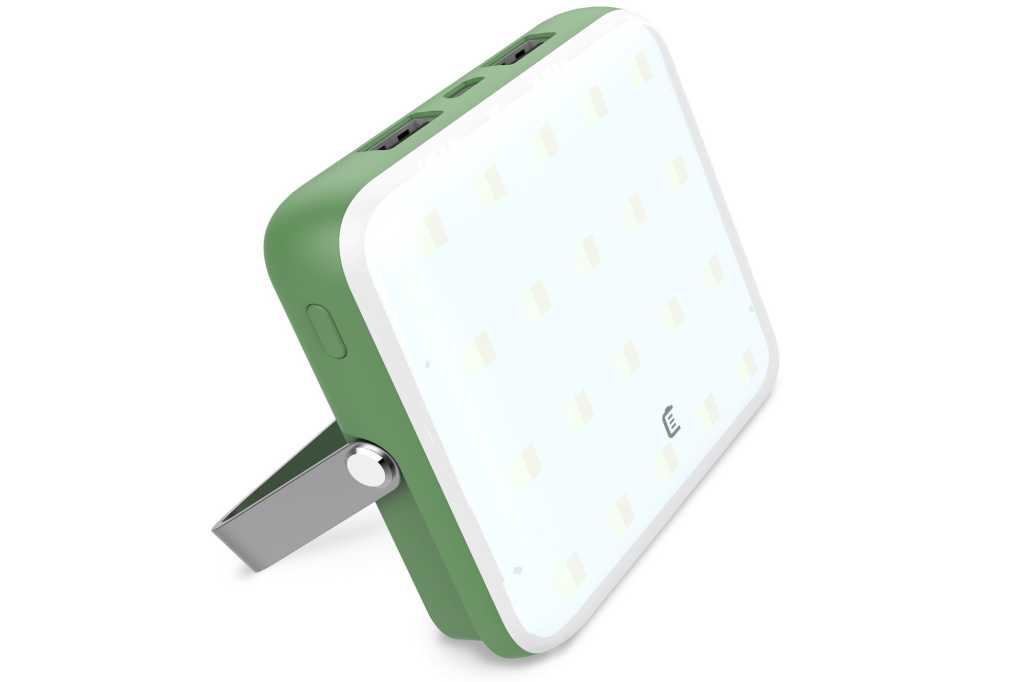 myCharge
At a Glance

The myCharge Camping Lantern Power Bank’s bright LEDs, compact size, and long-lasting battery render it useful for many applications at home and on the road, but the absence of USB Power Delivery means it’s not the best mobile power bank.

The myCharge Camping Lantern Power Bank is two handy gadgets in one. As its name indicates, it’s both a super-bright portable LED light source and a long-lasting USB power bank for charging your smartphone or other mobile devices.

While it’s equipped with a 10,000mAh batter, the roughly 3.5-inch-square device makes a better flashlight than power bank. Its 20 dual-element LED elements can be set to four brightness settings to produce 500, 320, 250, or 170 lumens respectively when the LEDs are set to produce white and yellow light. You can also change the color temperature of the light, from the aforementioned yellow/white to a cool white and warm yellow.

A fold-out metal stand allows the myCharge to rest on any flat surface angled to cast its light where you need it most, or you can use it as a handle. The manufacturer says it will produce light for up to 41 hours at its darkest setting, up to 22 hours at level 3, up to 15 hours at level 2, and 9 hours at full power. The light will also flash SOS in Morse code for emergency situations.

You can charge two mobile devices at once by plugging their cables into the myCharge’s USB Type A ports, with a maximum shared output of 2.4 amps. The manufacturer says the battery has enough capacity to charge an iPhone X four times, a Samsung Galaxy S9 three times, and an iPad Pro once. A four-element LED indicator on the back displays the current battery level when you hold its power button down, and the device itself is recharged via micro-USB (a cable is included, but you’ll need to provide your own AC adapter). What’s missing? A USB-C port and USB Power Delivery.

The myCharge will make a good addition to any emergency-preparedness kit. It produces a lot of light for its size, and its sturdy metal stand directs that light where you need it. It’s a handy device for backpacking and camping trips where you don’t have access to other forms of power, but we’d like it even better if delivered fast charging.