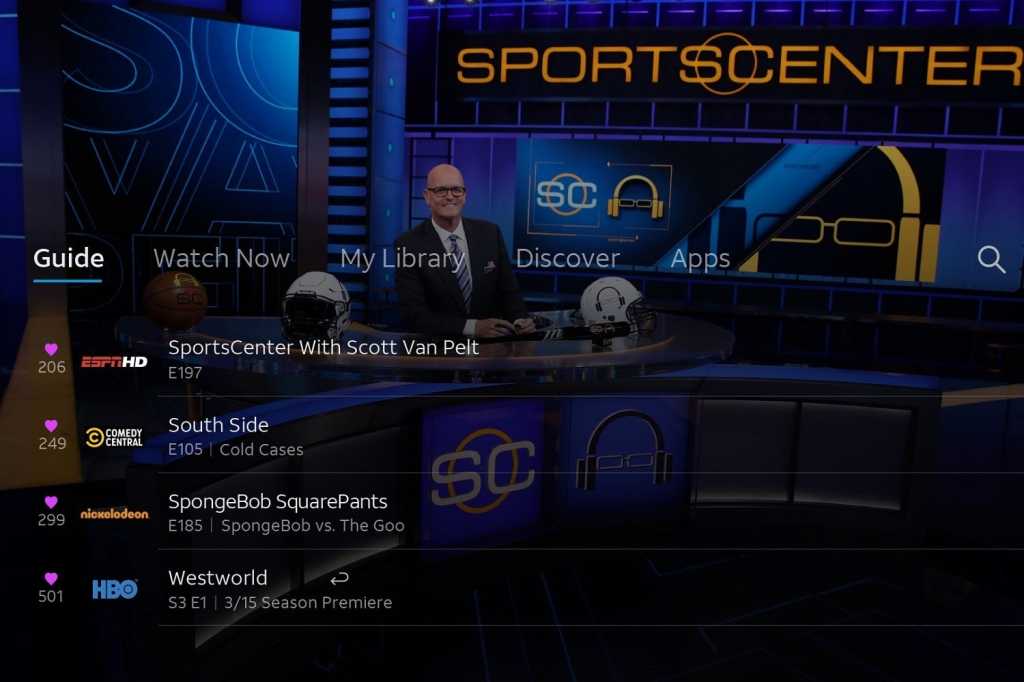 Image: AT&T TV
At a Glance

DirecTV Stream provides a streaming experience similar to cable—warts and all.

Tiered pricing starting at $69.99 per month ($10-per-month discount for the first three months)

The live TV streaming service DirecTV Stream (formerly known as AT&T TV) feels like a half-measure, both for AT&T and for prospective cord-cutters.

Like other live streaming bundles such as YouTube TV and Hulu + Live TV, DirecTV Stream provides dozens of live cable channels over the internet. But unlike those other services, DirecTV Stream offers an optional streaming box that retains traditional TV concepts. It launches straight into live TV when you turn it on, has dedicated guide and channel number buttons on its remote, and comes with an easy-to-use cloud DVR.

The idea is to give people an off-ramp from cable—or, in AT&T’s case, an alternative to its rapidly declining DirecTV satellite and U-Verse TV services—without throwing them into a completely alien streaming experience. If you can look past a few minor annoyances, the approach mostly works.

The main problem is the cost of the service, which requires a two-year contract and gets so much pricier after the first year that it doesn’t save much money over cable. At that point, those who’ve dipped a toe into cord-cutting might kick themselves for not diving in headlong instead.

DirecTV Stream: What it costs, and what you get

Here’s the full breakdown of pricing for each DirecTV Stream tier (each higher tier includes everything in the tiers below it):

As for what each package includes, AT&T has a full channel comparison here, but the “Entertainment” package covers local stations, major news channels, national sports networks, and a broad range of entertainment channels. Regional sports requires one of the higher tiers; you can check on specific local channel coverage here.

You can access DirecTV Stream on your own streaming hardware, including Amazon Fire TV, Apple TV, Samsung smart TVs, Chromecast, iOS, and Android (you’ll find a list of DirecTV Stream compatible devices at this link). Alternatively, you can add the DirecTV Stream box for $5 per month for 24 months (or pay $120 up front). AT&T doesn’t charge equipment rental fees

DVR service doesn’t cost extra, either, and includes unlimited cloud-based recordings. Unlike with cable, you won’t be able to watch these recordings offline, but on the upside, they’ll be available from any device you use to access the DirecTV Stream service.

With the average pay TV bill costing about $110 per month, AT&T isn’t offering much of a cost savings after its promotional period. Other live TV streaming services are much cheaper, including YouTube TV ($65 per month), Hulu + Live TV ($70 per month and bundled with Disney+ and ESPN+), and Fubo TV ($70 or $80 per month, depending on which tier you choose).

Not just another cable box

If you’re not turned off by the costs, you’ll find an Android TV-based streaming device that does its best to mimic the cable experience, while also providing access to external streaming apps.

The tech specs are nothing special, with a quad-core Broadcom processor, 2GB of RAM, and 8GB of storage. Around back, there are ports for wired ethernet, optical audio output, and a USB port for accessories (such as a game controller). While the device streams in up to 4K resolution with HDR10, it does not support advanced HDR formats such as Dolby Vision or HDR10+. (AT&T says it’s working on supporting those formats down the road.)

It’s certainly not as fast as, say, an Nvidia Shield TV, and I occasionally noticed some lengthy delays when moving between apps or bringing up voice controls. Still, the core TV guide feels responsive and animates smoothly.

Meanwhile, the remote control does much of the heavy lifting to emulate cable TV. Beyond just the basic directional pad for navigation, the remote has dedicated buttons for the TV guide, previous channel, recording function, and DVR list, along with a number pad for folks who like to memorize channel numbers. It also has an infrared emitter built-in, so you can turn the TV on or off, adjust or mute the volume, and switch TV inputs.

DirecTV Stream integrates with Google Assistant as well, so you can hit the microphone button for voice control. Again, this occasionally took a few seconds to respond, but jumping directly into live channels or launching DVR programs by voice was pretty satisfying when it worked.

The remote’s design could be better, though. Its oblong shape never quite nestles comfortably in the hand, and I wish the directional keys were raised higher or had some dimples to help guide your thumb into the right place. The rockers for volume and channel controls are a nice touch, though.

The notion of preserving cable familiarity also extends to DirecTV’s software. Unlike with Roku or Fire TV devices, there are no extra menus between you and live TV. When you turn the device on, it simply jumps to the last live channel you were watching, and TV continues to play in the background as you navigate through menus.

Hitting the remote’s home button brings up a handful of options: Guide leads to a traditional grid of live channels, Watch Now offers a glance at featured live and on-demand programming, My Library brings up the DVR list and any on-demand shows you’ve bookmarked, and Discover gives you bunch of other ways to browse the DirecTV Stream catalog. You can also search for specific movies, shows, actors, and directors.

The grid guide is really the star of the show here. You can scroll out up to 14 days, create a list of favorite channels, and filter by movies, shows, sports, and children’s programming. Scrolling over a program brings up a thumbnail image and episode description, and clicking the program brings up more information and recording options. When you’re watching live, DirecTV Stream will automatically buffer the program so you can pause or rewind without having to record it first, though you can also hit the DVR button to save the program for later.

The DVR experience is decent, with 500 hours of storage and no restrictions on ad skipping, but it would benefit from more sorting and filtering options. There’s no way to automatically delete older episodes of a specific program (this is mainly useful for news and talk shows), and the master DVR recording list seems to have no discernable order to it. On the upside, DirecTV Stream does display a progress bar for any programs you’re watching so you can easily pick up where you left off, and it offers to delete recordings once you’ve finished watching them.

DirecTV Stream also gets high marks for video and audio quality. It preserves 60-frames-per-second playback on every applicable channel and program, and even supports 5.1 surround sound for live channels. (AT&T’s rival live TV streaming services are still stuck in stereo for live TV.)

When you want to use external streaming services such as Netflix, you can scroll over to the Apps tab, where you’ll be able to launch some pre-loaded apps and download additional ones from the Google Play Store. This mostly works as expected, but the lack of any deeper content integration with DirecTV Stream’s own menu system seems like a missed opportunity. Browsing Netflix, for instance, requires you to exit the DirecTV Stream menu system entirely. Also, you’ll still need a separate streaming device if you want to watch Amazon Prime Video or Hulu, because they’re not available at all on the DirecTV Stream hardware.

There’s also a major drawback if you’re accessing DirecTV Stream on a separate streaming device, such as Apple TV or Fire TV: The DirecTV Stream app on these devices doesn’t support visual preview for recordings, so you can’t tell if you’ve finished fast forwarding through commercials.

Overall, AT&T did a fine job porting the cable TV experience to its own streaming hardware. But in doing so, it must contend with some issues that don’t exist in traditional TV.

Streaming TV, for instance, is inherently less reliable than cable, and while I personally had no issues watching DirecTV Stream, I also have a 200Mbps home internet connection and a state-of-the-art wireless router. A lot of folks haven’t made those kinds of investments, or lack the technical expertise to troubleshoot issues like buffering. (This is anecdotal, but the most common type of email I get is from people who are having problems with their streaming setup and can’t figure out why.) They may also be dealing with data caps that limit how many hours of TV they can stream every month.

With streaming, you also get much greater latency for live broadcasts. In my tests, local channels in DirecTV Stream lagged about 35 seconds behind the same channels from an antenna, which is pretty typical for live streaming services. (Cable also tends to lag behind over-the-air signals, but not by nearly that much.) This can be a deal breaker for those who like to keep up with social media or talk to friends while watching live events.

For many cord-cutters, those drawbacks are worth tolerating for the cost savings. Yet DirecTV Stream isn’t offering much savings at all. That makes it tough to recommend.

Updated to reflect the name change from AT&T TV to DirecTV Now and to note new pricing and information about the now optional hardware. We are working on a full re-review and will republish this review when that’s complete.