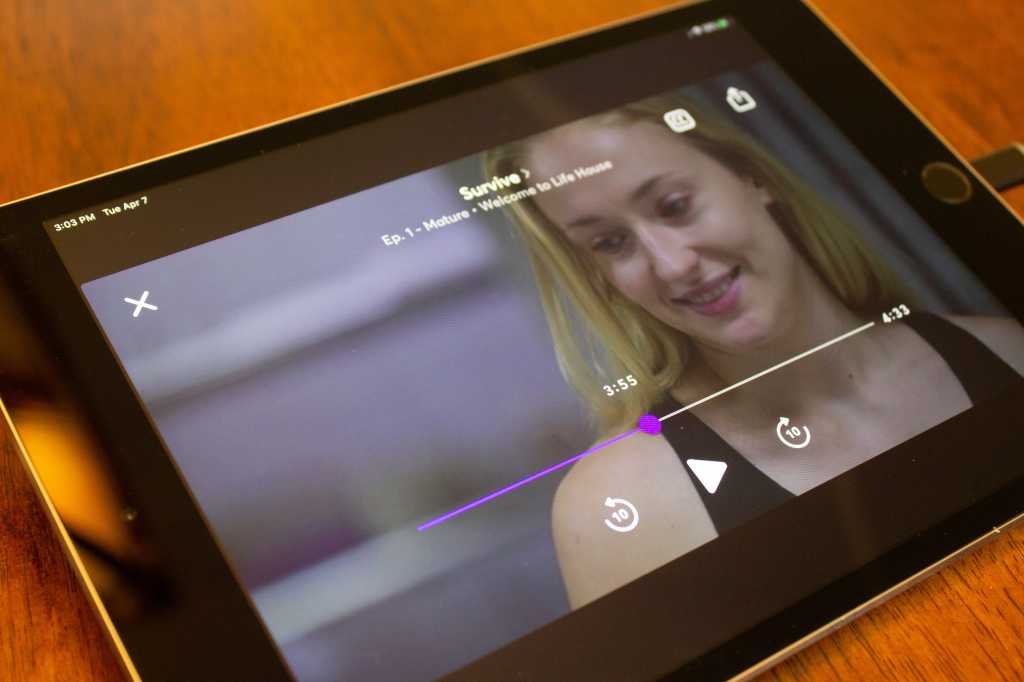 If you don’t mind being limited to watching on mobile devices, Quibi offers fun video entertainment with an innovative ability to change perspective based on the orientation of your device.

Quibi, the new short-form video-streaming service from Hollywood mogul Jeffrey Katzenberg (former chief executive of Disney and co-founder of Dreamworks), is designed for viewing on mobile devices and only mobile devices; even more specifically, smartphones. With most of us decidedly not on the go for the next few months, is Quibi worth the price of admission?

I say yes—emphatically so—and not just because everyone can sign up for a 90-day free trial (provided you sign up before the end of April). This is a fun concept, and most of the episodic entertainment on offer (presented in 10-minute installments) is top shelf.

TechHive has already published my mini reviews of a handful Quibi (the name is short for “quick bites”) shows. This article focuses on the Quibi app, which is available for Android and iOS, but the At a Glance, Pros/Cons, and numeric score apply to the app, the shows, and the service in general. Quibi promises to deliver 175 new shows in its first year, comprising some 8,500 episodes.

You’ll encounter a wide-ranging mix of entertainment already available, from the promising (Most Dangerous Game, You Ain’t Got These, Run This City, Shape of Pasta), to the diverting (Survive, Dishmantled, Flipped), to the regrettable (Nikki Fresh, Skrrt with Offset, Chrissy’s Court, Punk’d). The service launched with several shows that Quibi didn’t make available to critics for preview, including two daily news programs, Around the World by BBC News—whose very first episode includes a rare speech from the Queen—and The Report by NBC News. All the Feels, by The Dodo looks to be a glorious addition to each day; the first episode is about an adorable tripod puppy!

There’s also Sexology with Shan Boodram, whose first episode is dedicated to setting up a dating profile; Pop5 by iHeartMedia, about the latest in music; The Replay by ESPN, which will hopefully have sports news someday, but is now about the lack of sports during COVID-19; Last Night’s Late Night by Entertainment Weekly, which is a little too annoyingly chirpy, but contains funny clips; and a 5-minute meditation called The Daily Chill. The first episode has a soft-spoken female narrator and images of feet walking on a California beach. Some shows have new episodes daily; others come in weekly installments. Given that one person’s trash is another person’s treasure, everyone will find something to enjoy.

Quibi has an innovative feature—dubbed Turnstyle—that allows you to watch all content in either landscape (horizontal) or portrait (vertical) views. This is accomplished by sending two simultaneous streams to your device, so that when you rotate your screen, you instantly get a different perspective on the scene with a quick cut and virtually no interruption in the action.

Tapping on the screen during playback brings up a control bar with a pause button, a close button, the  ability to scrub forward or backward 10 seconds, a share button, and—happily—optional subtitles (available in English, Closed Caption English, and Spanish). You can also mute the audio and display Closed Captions by holding finger down the screen. Audio is excellent, and you’ll benefit greatly from listening on headphones rather than your phone’s tinny speakers.

Since each show is just 10 minutes long, you’ll be tempted to watch each one all the through twice just to see the differences. Even though the pictures are small, the scripted shows are still interestingly cinematic. Watching in landscape mode provides more striking compositions, while portrait mode allows for closer views of faces, and perhaps stronger emotional connections. This feature isn’t a mere gimmick.

Turnstyle doesn’t apply to the home screen, however; that’s presented only in portrait mode. There are four tabs arranged across the bottom of screen: For You, Browse, Following, and Downloads. The For You tab allows you to swipe through 20 or so shows; but the app doesn’t support user profiles, so I’m not sure how Quibi knows which 20 shows I might be interested in watching. The app also doesn’t have a means of recommending content. We’re all familiar with suggestion verbiage such as “If you watched Most Dangerous Game, you might also enjoy Survive.”) Perhaps that feature is in the works; it will be badly needed as Quibi offers more and more content.

This is also a good time to point out that Quibi allows just one stream per account, so it will be difficult for families to share an account unless they all want to huddle around the same smartphone or schedule when each person is allowed to sign on and watch. A workaround: Watching a show that’s been downloaded to one device doesn’t prevent streaming to a different device. I’ll discuss downloading in more detail in a bit.

It’s problematic, however, that Quibi doesn’t allow streaming to a TV using Chromecast or Apple AirPlay, and there’s no version of the app for streaming boxes such as a Roku or Amazon Fire TV. What’s more, the shows are streamed at smartphone resolution only. I was able to stretch the view on an iPad Mini, but I was still left with left black borders all around the picture on even that small tablet.

Getting back to the For You tab: When you land on a show you think you might be interested in, audio defaults to mute, so you’re not embarrassed by a sudden blast of sound. But you’ll need to know that some shows exist, because not every show will be included in the For You list.

And that brings me to the Browse button. You can enter broad searches here, including genres (“comedy” or “documentary,” for example), as well as the titles of shows and even—if you know them—the titles of individual episodes. A search for “food” came up with the service’s two wildly disparate cooking-related shows, Dishmantled and Shape of Pasta.

A search for “kids,” however, came up with nothing at all. Quibi does have a few shows coming up that could be kid-friendly, but most of its content is aimed at adults (not necessarily mature audiences in the TV-sense of the word, but there are no kid shows right now).

The Following tab is a place to bookmark your favorite shows, which is useful, since with so much content, users will likely latch onto just a few shows and stick with them. Finally, the Downloads tab shows users’ stored content that can be viewed offline. Apparently, downloads are unlimited, and everything qualifies, but we don’t know how long downloads remain available or if they expire after a while. If you subscribe to the ad-supported version of Quibi, an ad will play before your download begins.

When you find a show you want to watch—an easy task—playing an episode is an intuitive process: Click on the thumbnail in the “For You” tab and then click the large Play button. If you’ve already started watching an episode, the stream will pick up where you left off. If you haven’t started watching a show, it will start with the first episode (after an ad plays, if you’re on the ad-supported app). You can also click on the three dots underneath the thumbnail and bring up a “more info” screen (again, after a short ad). Here you’ll find a list of the cast and crew (with short bios for each, courtesy of IMDb), links to individual episodes, a trailer, a download link for the current episode, and a Share button (which sends a link to the show to the person you select).

Settings in the app enable you to minimize your data use by reducing both video and download quality, limiting downloads to when the device is connected to a Wi-Fi network, and reducing streaming quality or download quality. You can also switch the user interface into Left-Handed Mode, and you can toggle a haptic feedback mode on and off. A Help section includes a FAQ with quick answers to common questions, and customer service contact options for text message, online chat, telephone, and email (with limited hours for everything other than email).

Once your 90-day free trial expires, the ad-supported version of Quibi will cost $4.99 per month (ads run 5- to 10 seconds each). You’ll pay $7.99 per month for the ad-free experience. There is no discount offered for annual subscriptions on either plan, and billing happens automatically through the store from where you acquired the app (the Apple App Store or the Google Play Store). So, if you download both versions of the app, you’ll likely be billed twice if you don’t cancel before your free trial ends.

Katzenberg and company could not have predicted that a global pandemic would have most of us locked in our homes for at least the next few months; but if your family is tired of bickering over what to watch on TV, free Quibi trials will give everyone their own private video entertainment channel for a while (provided each family has their own app store account and mobile devices to watch on, that is).

After that, the entertainment on offer is still worth price of admission—at least for an individual user. Whether couples and families will want to pay for multiple subscriptions is a whole other matter.