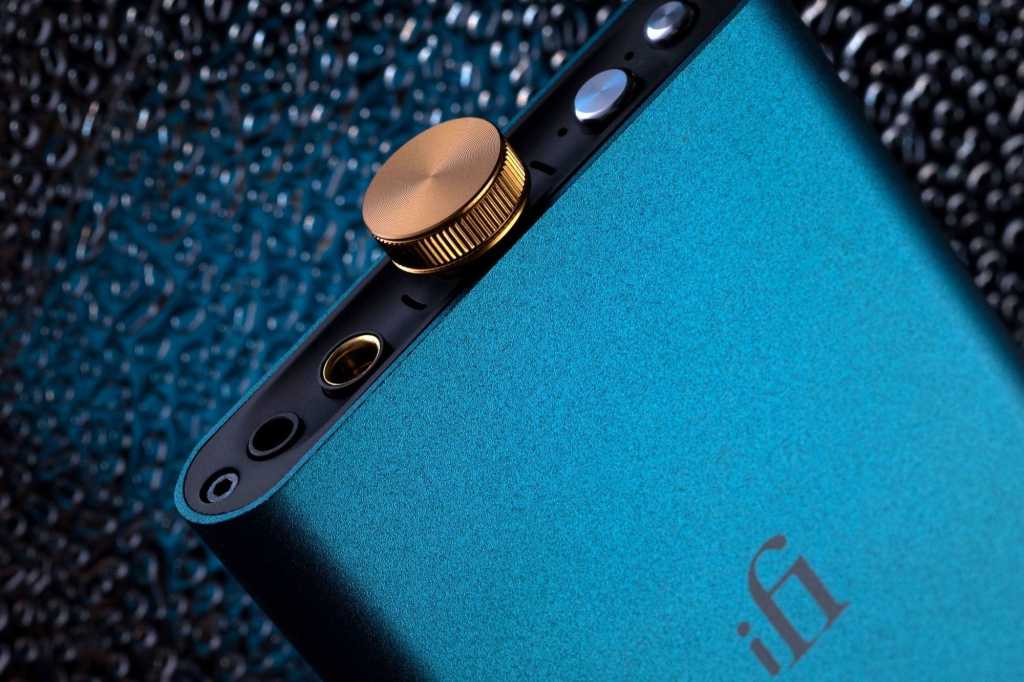 Portable audio is one of the fastest-growing segments of the audio market, and for good reason. People now have access to an almost infinite variety of music anywhere they happen to be. And for many, sound quality is critically important.

The most common source for music on the go is a smartphone, but unfortunately, the sound quality of many smartphones is sorely lacking. This is primarily attributable to the phone’s built-in DAC (digital-to-analog converter) and headphone amplifier. So, the best way to improve the sound quality is to use an outboard DAC/amp.

British audiophile company iFi offers an elegant, high-end solution to this problem with its new hip-dac, a small DAC and headphone amplifier. After spending some time with it tethered to my iPhone, all I can say is, Wow! (Okay, I can say more than that…)

The iFi hip-dac is smaller than most smartphones, measuring 4.0 x 2.8 x 0.6 inches (LxWxH) and weighing only 4.4 ounces. With a protruding volume knob, it bears a strong resemblance to a small hip flask for booze, which might be the inspiration for its name. Speaking of the volume knob, it feels very solid with smooth, well-damped motion; in fact, the entire unit feels very sturdy with a solid extruded-aluminum casing. On the inside, the company claims to use premium audiophile components throughout.

There are two USB ports on the back. The larger USB 3.0 Type A port connects to the source device and accepts a digital-audio signal. Interestingly, this port is a male connector with some space around it. According to iFi, this provides greater mechanical integrity than the typical female USB connector or Mini/Micro-USB ports found on many such products. The hip-dac comes with a short USB-Male-to-USB-Female cord for connecting to a computer as well as a short USB-C-to-USB-Female cord for connecting to an Android device. You need an Apple Lightning-to-USB Camera Adaptor cable (sold separately) to connect an iOS device. I wish the hip-dac came with one, but I suppose that could be an Apple licensing issue.

The other port on the back is USB-C for charging the battery, and the hip-dac comes with a USB-A-to-USB-C cable to plug it into a USB charger. The hefty 2200mAh battery is rated to last around eight to 12 hours, depending on the volume level and how power-hungry the headphones are.

In addition to the battery, the hip-dac can be powered directly from the USB port on a computer. The manual recommends using battery power with iOS and Android devices, which don’t have enough juice to power the unit. To use USB power, connect the hip-dac to the source first, then turn on its power; to use battery power, turn it on before connecting it to the source device.

Digital audio enters the hip-dac through the asynchronous USB Type A port regulated by iFi’s precision global clock system, which effectively eliminates any jitter. The clock is also applied to the Master Control Unit and custom-programmed XMOS processing chip, which can be updated with new firmware. Users can even experiment with different digital filters, such as the GTO filter from the company’s high-end Pro iDSD DAC/amp.

The digital signal then encounters the custom-programmed Burr-Brown DSD1793 DAC, which can accommodate PCM sampling rates up to 384kHz and bit depths up to 32 bits. It also supports DSD (Direct Stream Digital), the format of SACDs, up to 12.3MHz, as well as MQA (Master Quality Authenticated) files.

On the front of the unit, the volume knob (which operates on the analog signal and also turns the power on and off) is joined by two outputs. One is a conventional 3.5mm stereo output, while the other is a slightly larger Pentaconn 4.4mm balanced output, which allows headphones with balanced connectivity to take full advantage of the hip-dac’s balanced-differential amp design.

This design is derived from iFi’s flagship Pro line of products. Each channel includes two amps, one of which inverts the phase of the input signal (see Fig. 2). When a headphone with the appropriate wiring and plug is connected to the 4.4mm output, the two amps for each stereo channel are connected to opposite ends of the corresponding driver’s voice coil. The balanced architecture greatly reduces distortion, induced noise, and crosstalk between the amps, and the effective signal level and slew rate are doubled, which is great for power-hungry, less-sensitive headphones.

Of course, most consumer headphones do not have balanced wiring to their voice coils. Such “single-ended” headphones are connected to the 3.5mm output. In this case, only one amplifier is used per channel in what iFi calls an S-Balanced configuration (see Fig. 3). A dedicated negative wire extends back to each amplifier’s ground to make sure there’s no crosstalk between channels in addition to lowering noise and distortion than more conventional designs. The level is lower than the differential configuration as well.

Two buttons are located on the other side of the volume/power knob from the outputs. The smaller, outermost button controls the hip-dac’s PowerMatch function, which provides two gain settings. According to iFi, this function “matches the level of drive to the load presented by the headphones by adjusting input sensitivity and signal strength. With less-sensitive headphones, such as large cans, put PowerMatch at its higher setting for best performance, and vice versa for IEMs.” Simply put, PowerMatch increases the gain by 6dB.

The other button engages XBass, which is an iFi-designed analog signal-processing circuit that boosts the bass. It’s intended primarily to restore the bass that open-back headphones might lose because of their design. As iFi adds, it can also be used on “just those tracks that miss that bit of bass.” 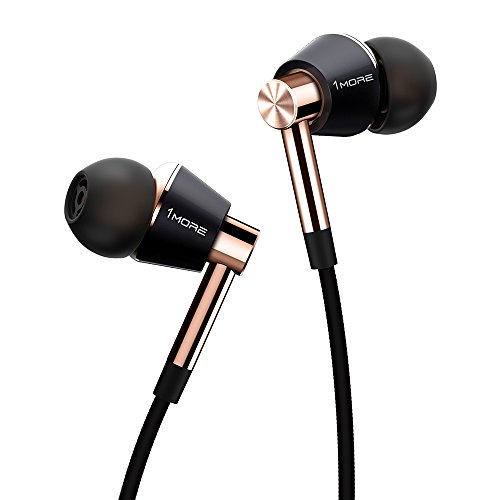 I used the hip-dac in battery-power mode with my iPhone XS, making the connection with an Apple Lightning-to-USB Camera Adaptor. All tracks were played from the Tidal Master (high-res audio) library; most of the tracks I selected were in MQA format, as indicated by the LEDs on the hip-dac. I listened to everything on 1More Triple Driver in-ear headphones (IEH), which I reviewed here.

I began with “Life Goes On: And Then One Day” from the album Life Goes On by Carla Bley, Andy Sheppard, and Steve Swallow. The instrumentation is sparse: piano, bass guitar, and soprano and alto sax. The hip-dac’s rendition was gorgeous, with clear delineation of each instrument and a completely natural tonality.

Turning on PowerMatch certainly made the track a lot louder and perhaps just a tad harsh with the Triple Driver IEH. I also tried XBass, which greatly boosted the bass, but I was quite surprised to hear no congestion or change in tonality. This feature is great for bass heads, though I prefer a more natural balance, which I got with XBass turned off using the Triple Driver IEH.

Next up was “Good Lava” from Esperanza Spalding’s album Emily’s D+Evolution. The sound was exquisite, very smooth and liquid. Spalding’s voice was beautifully rendered, and I could hear deep into the mix. As before, XBass boosted the bass significantly while remaining well-integrated with the rest of the mix, though the bass drum was just a bit overblown.

Moving on to classical music, I listened to the third movement of Rachmaninoff’s Piano Concerto No. 3, Op. 30, as performed by Behzod Abduraimov at the piano with the Concertgebouworkest orchestra under the direction of Valery Gergiev from the album Rachmaninoff: Piano Concerto No. 3. It was superb; the piano sounded entirely natural, and each orchestral section was clearly delineated with no congestion whatsoever. And the dynamics were artfully rendered, from delicate passages with solo flute to thundering brass.

For some a cappella singing, I cued up Adoramus te, Christe by Orlando di Lasso as performed by the Sistine Chapel Choir under the direction of Massimo Palombella on the album O Crux Benedicta, which was recorded in the group’s namesake venue. The Sistine Chapel has amazing acoustics and a long reverb time, and the hip-dac rendered that sound wonderfully; I could hear the hall clearly, while the voices remained clean and distinct.

Turning to pop music, I listened to “Agua De Beber” from the album In the Key of Joy, Vol. 2 by Sergio Mendez. On this track, he is joined by will.i.am for a Latin groove that sounded liquid smooth. I tried XBass again, which brought up the bass big time while remaining well-integrated with the rest of the mix.

Finally, I sampled “Cerulean Blue” from the album Mixing Colours by brothers Roger and Brian Eno. This track is a delicate blend of synthesized sounds, which sounded super-clean as rendered by the hip-dac.

Comparison with the iPhone internal DAC and amp

With each track, I compared the sound of the hip-dac with the iPhone’s internal DAC and amp by connecting the IEMs directly to the phone using a Lightning-to-headphone-output adaptor. In every case, the direct connection sounded somewhat sharper and more brittle than the hip-dac, sometimes leaning a bit into harshness.

On some tracks, the bass was less distinct, and the sound was slightly congested and veiled, especially in the low frequencies. The Rachmaninoff recording sounded like the entire orchestra was more crowded together, whereas it sounded open and expansive on the hip-dac.

The iFi hip-dac offers a superb alternative to the built-in DAC/amp found in any common digital-audio source device. Its sound is super clean, open, and liquid smooth, and it’s compatible with a wide variety of digital-audio formats up to 384kHz/32-bit PCM and 12.3MHz DSD as well as MQA. Also, it’s built like a tank with premium, pro-quality components throughout.

With most audio products, a feature called something like XBass means boomy, ugly bass, but not with the hip-dac. Its XBass boosts the low frequencies in a way that still integrates well with the rest of the mix. I imagine it would work exceedingly well with bass-deficient open-back headphones. And the PowerMatch function adds 6dB of clean gain, which should be a welcome feature for inefficient, power-hungry cans. Finally, a fully balanced output should provide even better sound quality with headphones that have balanced wiring to their voice coils.

I have only a couple of minor quibbles. I wish the format-indicator LEDs made it clear that PCM data was true high-res audio (88.2kHz or higher). And even though the hip-dac is relatively small and lightweight, it’s a bit awkward to physically manage it and a smartphone together. Also, because the volume/power knob sticks out, it could get banged fairly easily. I would love to see some sort of case that holds a phone and the hip-dac in a unified package and protects the volume/power knob.

Amazingly, the hip-dac costs a mere $149. I have no idea how iFi trickled that much quality into such an inexpensive package, but I sure am glad it did. If you want the best possible sound quality from your smartphone or other digital-audio source device, the iFi hip-dac is a no-brainer.