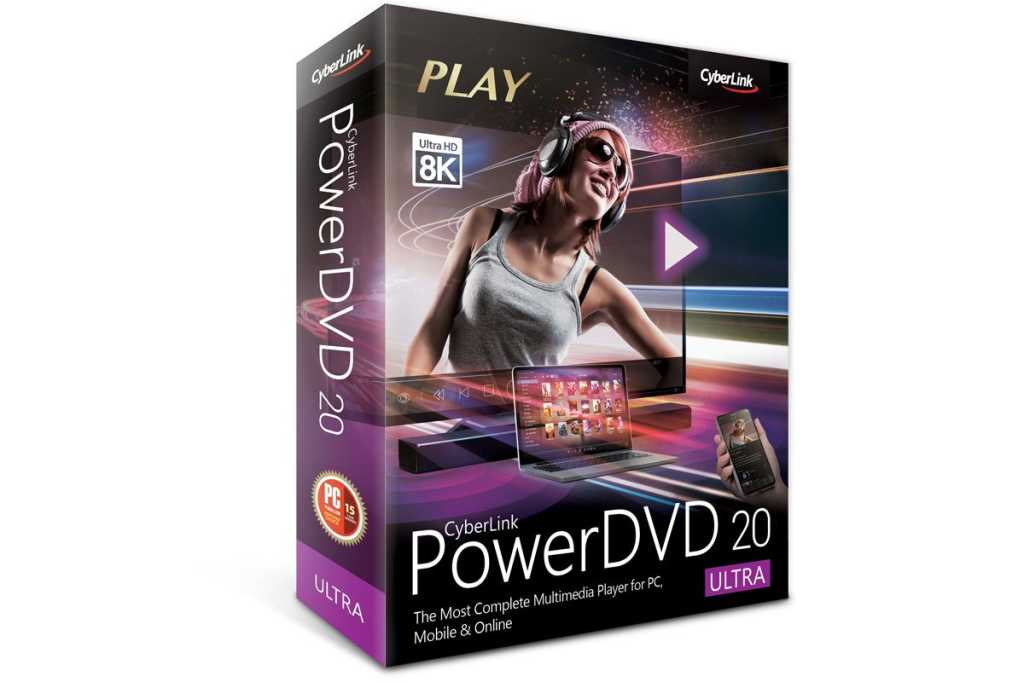 PowerDVD, now in version 20, remains the video player to have in terms of quality and the ability to play commercial movie discs on a PC.

PowerDVD 20 offers the best video playback money can buy, bar none. Yes, more than competent freebies such as VLC are available, but when it comes to image quality, Cyberlink’s pay-player has no peers. And peers, you and yours, is largely what this latest version is all about—you can now upload, share, and stream your videos to nearly any device and anyone via the company’s cloud service.

Updated to provide a link to our news story about the release of PowerDVD 21.

PowerDVD features two interfaces: one for use while you’re at your PC, and the other—TV Mode—for use with a remote when you’re playing couch potato. To facilitate your slothfulness, Cyberlink provides the Power Remote app, so your phone can fill that role. Sweet.

The TV Mode interface shown above is simple and easy, but the PC version below, while attractive and efficient enough for basics such as browsing and playing, could use some work in the nooks and crannies. Cascaded dialog boxes are convoluted, and it’s occasionally difficult to see where one ends and the other begins. Additionally, the popup menus aren’t always completely contextualized, showing numerous selections that aren’t germane to the task at hand.

To be fair, most video player configuration dialog boxes and menus are even less efficient, while not being nearly as good-looking. And I’m being picky—you’ll adapt in short order.

Before I get to the new stuff—a basic overview of what PowerDVD 20 does and what makes it better than the rest. As you might suspect from the name, the program started life as a tool to play DVD movies (including copy-protected commercial titles) from a PC. It still does that, as well as supporting new Blu-ray and Ultra HD Blu-ray movie discs if you have an HDCP-capable GPU.

It also plays a very wide variety of the most popular video, audio, and image files, though it’s not quite as universal as the company has at times trumpeted. Some legacy (RealMedia) and oddball codecs (some FLV, and even some older AVC) that VLC handles easily won’t play, or play only as audio with PowerDVD. The program is also a more than capable librarian and organizer with playlists, rankings, and the like.

While it’s not obliging of antiques, PowerDVD’s real value lies in its TrueTheater enhancements: HD upscaling, HDR color, lighting, motion compensation, noise reduction, and stabilization. The latter is useful if your camera didn’t take care of this on its own. Not all are available with all material or hardware, however; HDR color enhancement, for example, is only available if your PC’s graphics hardware supports it.

PowerDVD 20 will stream videos from various sources, including any local DLNA server (such as the NAS box I use to store my movies), YouTube, and Vimeo. It also “pins” YouTube videos for offline viewing. You can even cast to your TV using Cyberlink’s Android and iOS apps, which are free.

The $100 Ultra and 365 ($55 annually) versions of PowerDVD support all the latest (and not so latest) technologies, including 3D, 360-degree video with spatial audio, 8K UHD, HDR and more. If it’s a hot new thing, or was a hot new thing at one time, Cyberlink has added support—at least to the Ultra version.

The standard ($50) and pro ($80) versions don’t support all the advanced technologies, which honestly, some users won’t need. Cloud sharing and streaming aren’t provided with these versions, either. You can find the complete comparison of the versions here.

As I mentioned up top, by far the most compelling new feature in PowerDVD 20 is the leveraging of Cyberlink’s existing online storage infrastructure for storing, sharing, and remotely viewing your movies. The aforementioned Android and iOS apps allow viewing on the go, and you may share links with your friends, who can use those apps for free as well. Note that videos are transcoded to 720p or 1080p resolution as necessary during uploads.

100GB of Cyberlink Cloud storage is provided free for one year with the perpetual version of PowerDVD 20 Ultra, and can be renewed for $10 per 10GB per year, up to a maximum of 100GB. The 365 rental version is renewable in and of itself, and being only $55, is likely the better deal if you make heavy use of the cloud services. If you only use it lightly, the perpetual license with less capacity might make more sense.

Another new feature is “resume.” If you’re like me and don’t always finish a movie in one sitting, you’ll appreciate that PowerDVD now offers to take you back to where you left off. This can save quite a bit of time you’d otherwise spend memorizing the last location (tough when you’re falling asleep) and scrolling, and eliminates the possibility of ruining the suspense when you accidentally skip past your last location. Don’t ask me why I thought of that.

Cyberlink has added the facial recognition/tagging featured in its other products to PowerDVD’s image section, which also plays into the new social aspects of PowerDVD. Lastly, the company has moved from its own movie info database to a third-party repository of film knowledge with nice results. Cyberlink’s wasn’t bad; this one’s better. And no, they didn’t tell me which one. If any of you movie buffs recognize it, let me know.

While VLC and Media Player Classic will serve most users quite well, they don’t offer the ease and breadth of PowerDVD’s True-this and True-that video enhancements discussed above. You can almost always make a movie look better in PowerDVD than in other players.

While the enhancements have a pleasant effect on high-resolution video, where they really shine is with any material that’s of lower resolution than your display, or older material that may not have been remastered as well as it should have been.

PowerDVD is my go-to for classic movies (My Man Godfrey in the captures) when I watch them on my computer, especially when output via DisplayPort/HDMI to a 4K TV.

TrueTheater HD capable of sharper upscaling than that done in most TVs, especially less expensive models.

Playback performance with PowerDVD 20 was top-notch, though you might experience issues with less powerful CPUs and GPUs at higher resolution videos. That’s true with all video players. Turning off the enhancements can help, though I never felt I had to with any of the videos I tried.

As to that, I played all the 2160p (4K UHD) and 4320p (8K UHD) test material I use to test TVs, on my 2015 iMac (running Windows 10) with its Core i5-6500 and AMD Radeon R9 M380 GPU. There were no major hiccups though panning of detailed city- and nature- scapes wasn’t quite as smooth as with a top-end TV. On the other hand, there were no traces of moire or shimmer that you’ll find on all be the very best 8K UHD TVs. As I said, mileage will vary with hardware.

What Cyberlink needs to work on is making background connections to external and remote media a background process. I experienced several  “Close the program/Wait for the program to respond” dialog boxes and system lags of up to 10 seconds while PowerDVD waited for local hard drives and a NAS box to spin up. The program also spends a lot of time downloading info from the online database and showcase (new stuff you just have to watch!). If you experience slowdowns, just wait—the program will come around.

If you want the best looking video…

PowerDVD 20 is the first choice for those seeking every last ounce of video quality, and of course those that want to play commercial DVD, Blu-Ray, and Ultra Blu-ray discs using a PC. The sharing and streaming are a very nice addition that will likely have broad appeal for business and private use alike. That said, I’m all about the “resume” baby! Nice work Cyberlink.