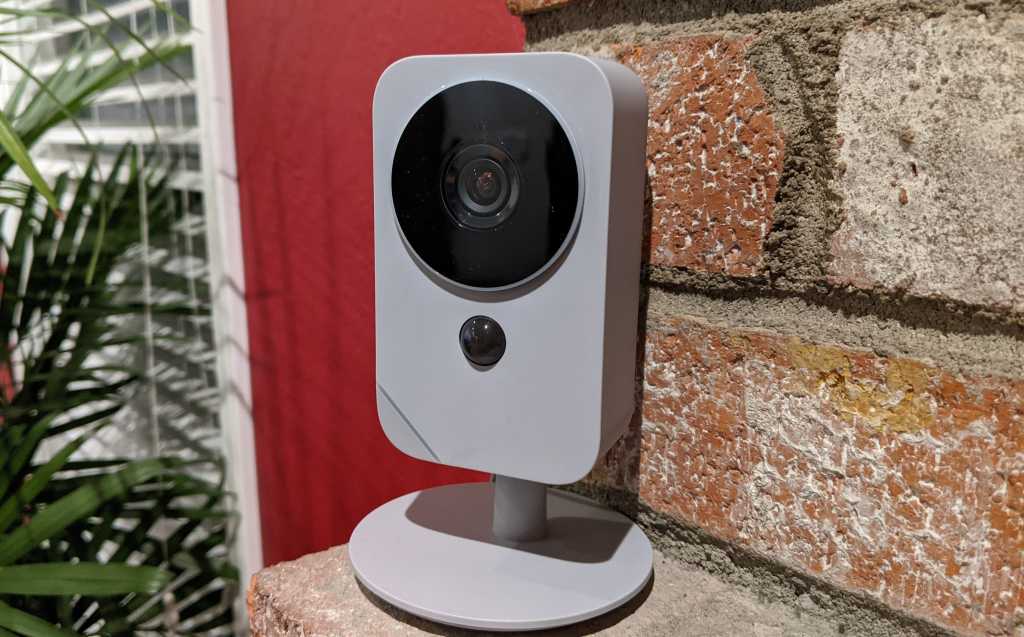 The Blue Indoor Camera from ADT comes with advanced detection features as standard and will even listen out for your CO2 or smoke alarm.

The Blue Indoor Camera is one of three home do-it-yourself security cameras from ADT. The camera is USB powered and comes with support for motion zones and facial recognition to help cut down on the number of irrelevant alerts you might receive.

All Blue products are styled in a rather utilitarian gray color and are a bit bulky. The design isn’t to my taste, but might be to yours. Regardless of how they look, they work well.

The indoor camera offers a two-way talk feature, so you can remotely speak to people through the companion smartphone app. It also packs a carbon monoxide (CO) and smoke alarm siren sensor. This will alert you if it hears a CO or smoke alarm going off in your house.

All in all, it’s a pretty good number of features for the price.

The camera can be used as a stand-alone device, with other cameras that each operate independently but are viewed within the same app, or as part of a larger security system. Right now the indoor camera works with the LifeShield system, which ADT purchased last year, and a dedicated Blue security system is promised for later this year.

Getting the camera up and running is not much more difficult than plugging it in and pointing it. It’s USB-powered but includes a battery back-up for short power failures. It can’t be operated without wired power for a long period of time.

Like the other Blue devices, getting the cam on a Wi-Fi network is simple. The companion app displays a QR code which you hold in front of the camera when it’s in set-up mode. The camera reads the QR code, which includes your Wi-Fi network name and password, and connects.

The camera can be mounted on just about any surface, either free-standing or with a mounting bracket. You can even mount it upside down on a ceiling and then flip the video image in the app so it’s the right way up.

The camera has several features that cost a premium on competing cameras. The first is the ability to set motion detection zones. This can be really handy if, for example, the movement of cars or trees outside a window sets off your camera. There are also settings to restrict alerts to certain hours of the day. When the camera is triggered, it will record for up to 10 minutes.

The camera offers a 130-degree view, which is plenty wide enough to see most of what’s going on in most rooms. The image was sharp and looked good on a smarphone.

Downloaded video was high-definition resolution of 1920×1080 pixels, but only 15 frames per second, which is half the typical frame rate. However, for this application that doesn’t really cause a problem.

The two-way talk function worked well and dual microphones on the top of the camera helped with noise reduction and made conversations clearer. One nice feature on the top is a mute button, providing some privacy to anyone in the same room as the camera.

An extra feature is local storage should the Wi-Fi network go down. The camera has a microSD card slot on the side and you’ll need to supply a memory card.

In the end, despite an uninspired design and the lack of a true battery option, the Blue Indoor Camera has a solid feature set, good performance, and an easy setup, all at a decent price.

Correction/Update, April 7, 2020: This article was updated to report the ADT Blue Indoor Camera’s recording time (up to 10 minutes, not 30 seconds as originally reported) and siren sensor (it listens for CO alarms, not CO2 alarms).

We have also leanred that the ADT Blue Indoor Camera, ADT Blue Outdoor Camera, and ADT Blue Doorbell Camera come with 30 days of video clip storage in the cloud, but that promotional offer ends after 30 days and changes to 24 hours of cloud storage. Buyers who want or need additional storage can get 60 days of clip storage in the cloud by paying $2.99 per month per camera or $12.99 per month for an unlimited number of ADT Blue security cameras.Customers must be logged into their accounts to change their storage options.