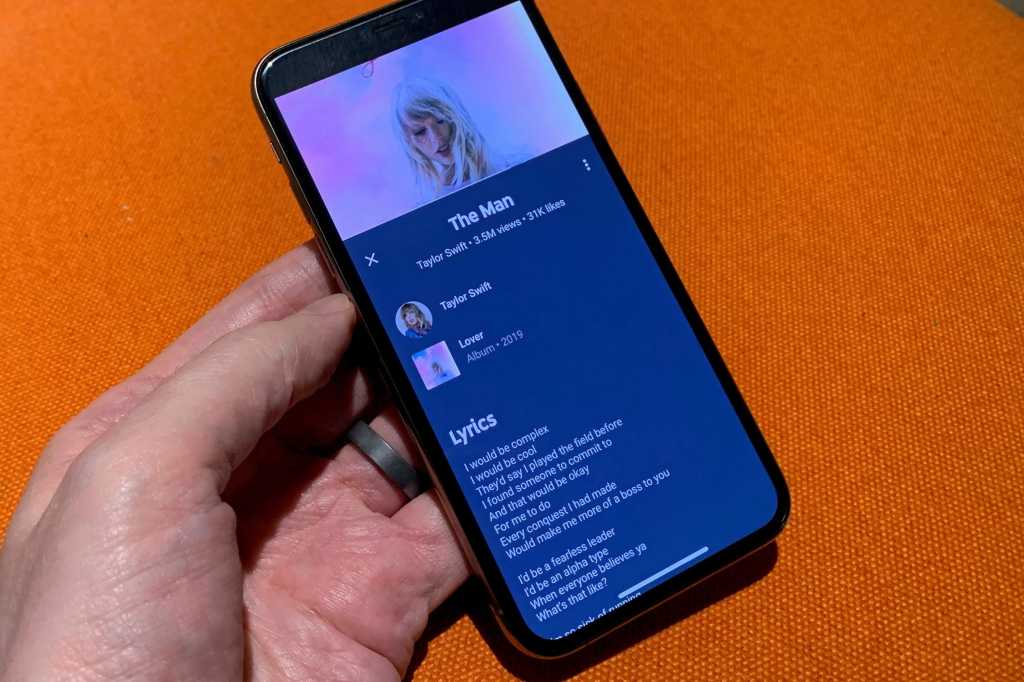 Google’s YouTube Music app just joined the ranks of streaming music players that show lyrics for the currently playing song, although the feature is missing a key feature compared to the competition.

As first spotted by The Verge, lyrics now appear on the iOS and Android versions of the YouTube Music app. To see the lyrics, just tap the “i” button to the left of the song title in the YouTube Music playback interface, and the full lyrics (supplied by LyricFind) will pop up on the screen.

While you can manually scroll through the lyrics in the YouTube Music interface, the lyrics don’t scroll automatically or highlight the words so you can follow along—or at least, not yet.

Apple Music and Amazon Music already offer lyrics on their streaming music apps for iOS and Android, and their lyrics scroll and highlight words automatically as the song plays. Meanwhile, Spotify rolled out real-time lyrics in 26 worldwide markets in mid 2020, but the feature hasn’t arrived in the U.S. yet.

Not all songs in the YouTube Music app will display lyrics at this point. During a brief listening session, I saw lyrics for “The Man” and “Look What You Made Me Do” by Taylor Swift, but not for “Worry About Me” by Ellie Goulding or “ME!,” a Taylor Swift track featuring Brendon Urie.

Song lyrics on the YouTube Music app appear for both free and paid subscribers. YouTube Music’s “Premium” subscription plan, which offers ad-free and offline tunes, goes for $10 a month, while a family plan for up to five family members costs $15 a month.

YouTube Music still has some catching up to do when it comes to the size of its paid subscriber base. Google announced last month that YouTube Music and YouTube Premium had a combined 20 million paying subscribers, a figure that’s dwarfed by Spotify’s massive 124 million premium subscribers. Apple Music is next with 60 million paid subscribers, while Amazon Music’s reported 55 million users include a mix of paid and free users (although Amazon insists that “nearly all” of those subscribers are paid users, including both Amazon Music and Amazon Prime members).

Updated on June 30, 2020 to clarify that Spotify’s real-time lyrics feature is not available in the U.S. yet.