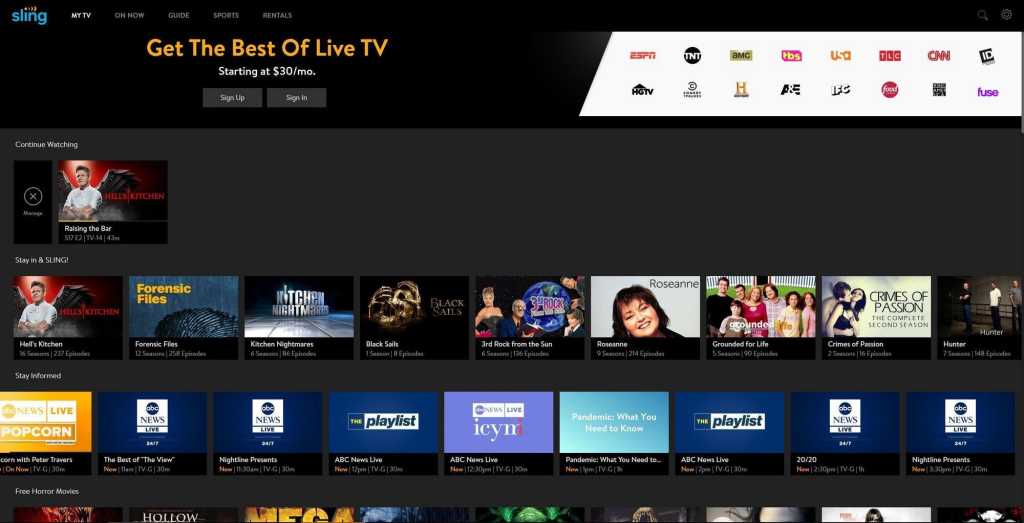 Sling TV is now offering cord-cutters and consumers staying at home to prevent the spread of the coronavirus the opportunity to stream ABC News Live along with a selection of family-oriented television programming at no cost.

To take advantage of the offer, you’ll need to download an app on a Roku, Amazon, or Android TV device. Alternatively, you can visit Sling.com using the Chrome, Safari, or Edge web browsers, agree to the company’s terms of use and privacy policy, and state that you are at least 18 years of age.

I visited the site with a Chrome browser and found a lot more free content than I had anticipated. In addition to several programs from ABC News (ABC News Live, Nightline Presents, and 20/20), plus children’s TV shows like Adventure Time and Lego: Ninjago, there were lots of movies, including the excellent 2005 Australian western The Proposition and the 2006 film The Illusionist, featuring Edward Norton, Paul Giamatti and Jessica Biel. You’ll also encounter TV shows, including multiple seasons of Hell’s Kitchen, 3rd Rock from the Sun, and The Greatest American Hero.

But not everything on offer is what I’d consider family friendly (the TV shows Crimes of Passion and Behind Bars, for instance, and the 2014 movie Bad Johnson). So, parents might not want to let kids Sling unsupervised. And rows of free content are intermingled on the page with programming that requires a subscription, although the latter is clearly labeled.

The paid version of Sling TV is less expensive than many of the other streaming TV services we’ve covered, starting at $30 per month for a limited number of channels (you can read our Sling TV review here). But you might find you need to pay for both its Orange and Blue plans ($30 each) to get all the programming its competitors offer. Alternatively, you can sign up for a one-month trial to either of its plans at the reduced rate of $20 per month.