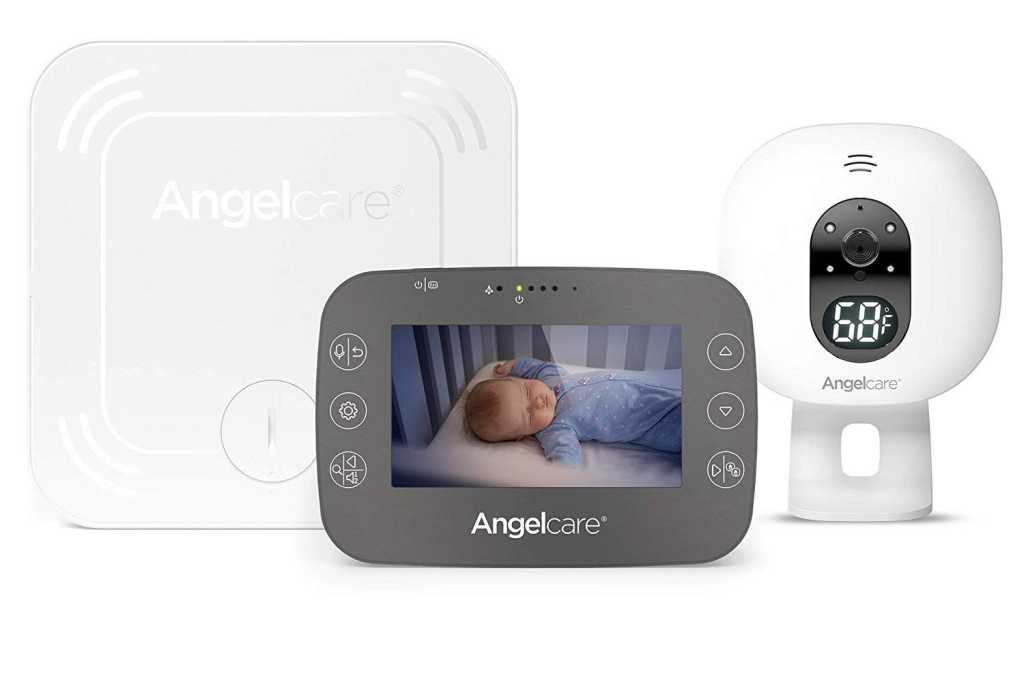 Angelcare
At a Glance

The Angelcare Baby Breathing Monitor is an easy-to-use and dependable aid for parents to monitor their child’s sleep safety.

Angelcare is one of the most trusted names in baby monitors. Its new Baby Breathing Monitor (model AC337) underscores why. It provides reliable, real-time feedback on your child’s sleep status, and it’s easy enough for even the most harried parents of newborns to install and operate.

The AC337 has three components: a handheld monitor, a camera, and a breathing-sensor pad.

The monitor, or parent unit, has a 4.3-inch LCD with 480 x 272-pixel resolution. Buttons on either side of the screen control talk-back, panning and zooming, volume, and menu navigation. LED indicators for power, sound, and movement—plus a microphone—run across the top of the monitor above the display. The monitor supports either one or two cameras and sensor pads, which can be purchased separately as a kit.

The camera, also called the nursery unit, measures about 3.5 x 3.5 inches and features digital zoom and panning. The unit displays the room’s temperature beneath its lens.

Angelcare’s patented Breathing Movement Sensor Pad is about 6.25 x 6.25 inches, which the company says is 40-percent smaller than previous models. Placed on a solid surface beneath your baby’s crib mattress, it tracks subtle movements produced by the child’s respiration. If it doesn’t detect any movement for 15 seconds, the nursery unit emits a single beep to rouse the child. If the child doesn’t stir within 5 seconds, the main alarm beeps continuously and a red alert symbol appears on the parent unit display.

The parent unit runs on a rechargeable lithium ion battery pack. Once you insert it, it must be charged for about 8 hours before its first use, and then regularly every 4 hours after.

The camera, which comes pre-paired with the monitor, runs on AC power, so it needs to be near an electrical outlet. It attaches magnetically to its stand, which can then be set on a tabletop or mounted to the wall using the supplied hardware. In either case, it needs to be kept at least 3 feet from the crib and sensor pad.

The breathing-sensor pad uses a button cell battery that inserts easily into a compartment on the top. The sensor must be centered beneath the crib mattress. If the crib has a slat or spring base rather than a flat, solid surface, you’ll need to also supply your own hardboard to put between the mattress and the crib base for the sensor to operate correctly.

Angelcare details a “four corner test” in its instruction manual to ensure the system is working before you place your child in the crib. You pat each of the four corners of the mattress in turn, and wait for the sensor to detect movement. If it does, you’ll here a “tick” sound every 5 seconds and the parent unit will flash green. You should then step away from the crib. The nursery and parent units should both sound their alarms if the sensor doesn’t detect any movement. It’s critical to remember that the sensor can register any movement, not just your baby’s. So if you’re leaning on the crib or the floor is vibrating from the washing machine running in the next room, the alarms won’t sound. It’s important to make sure, then, that the nursery is relatively still when your baby is sleeping for the sensor to be accurate.

The sensor worked flawlessly in my tests as long I followed the above protocol. You can pause or turn off the sensor from the monitor whenever you remove your child from the crib to keep the alarm from going off. The monitor also allows you to change the sensitivity of the motion detection, which helps you continue to accurately track your child’s breathing movements as they grow.

The camera’s video quality is about what you’d expect from a baby monitor. It’s good, not great, with a noticeable bluish color and some image noise. But you can clearly see your child and the environment around them. The digital pan-and-tilt is a little sluggish, but because the camera itself does not move, you don’t have to worry about motor noise disturbing your baby. The audio is clear and full when listening in on your child or speaking to them through the monitor’s microphone.

The parent unit provides a good deal of customization and control over the system. You can set upper and lower temperature limits and be alerted when temps fall outside that range. A Vox Activation feature transmits sound only when it is detected, reducing power consumption and sparing you from hearing the ambient hiss of the nursery. And, as mentioned, it lets you calibrate the sensitivity of the breathing pad. It also keeps you apprised of battery levels and other system settings via a status bar at the top of the display. My only complaint is the “touch buttons” aren’t very responsive and usually required me to press them forcefully several times before they’d react.

As we’re currently at the peak of flu season with a novel coronavirus spreading, it’s worth remembering that even common respiratory viruses can impair a child’s breathing. The Angelcare Baby Breathing Monitor is a dependable aid for ensuring your child sleeps safely and should go a long way toward easing the fears of nervous moms and dads.