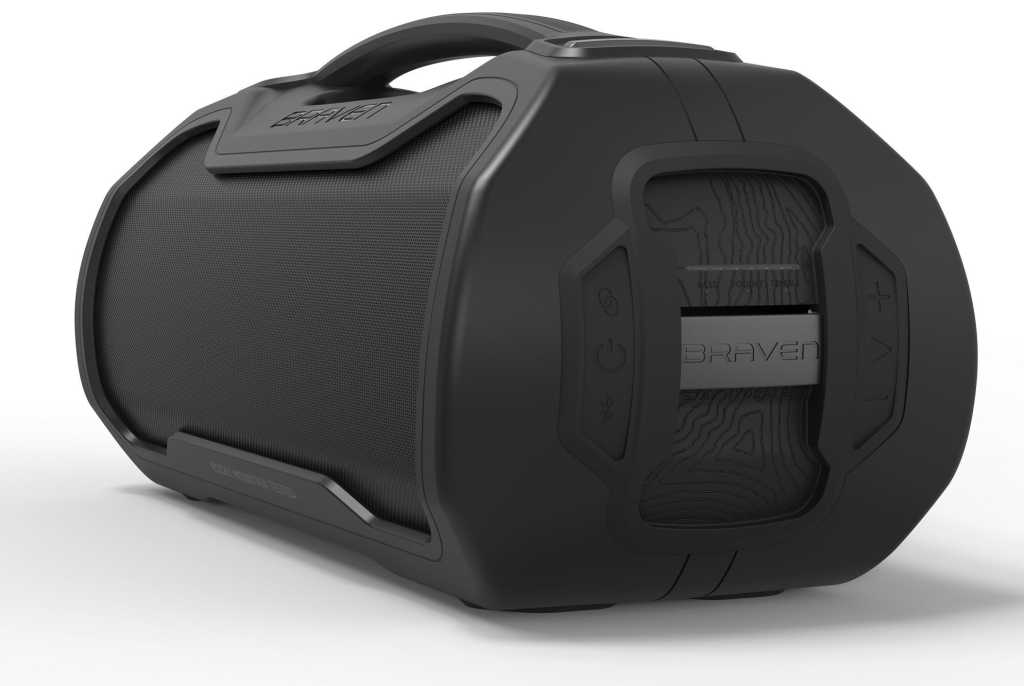 Zagg
At a Glance

At nearly 18 pounds, this speaker is definitely for the loud, rough, and ready crowd. It sounds quite good for an IPX5 rated unit, and it even has a built-in bottle opener with an ecologic conscience (it’s magnetized).

Braven’s $400 XXL/2 is a Bluetooth speaker that will look just as at home in the bed of a pickup truck as it will at the pool or at the beach. It’s rugged, it’s loud, it’s large, and it’s also cleverly designed by folks who’ve walked the walk. How else could you explain the presence of a magnetic bottle opener?

The XXL/2 measures 22 x 9 x 8 inches (WxHxD) and weighs nearly 17.5 pounds. It has a comfortable integrated handle, and Zagg includes mounts and a shoulder strap for long hauls, although to be honest, nothing is going to make hauling the XXL/2 any distance particularly comfortable. From the car to the picnic table or beach? No problem.

Yes, this is no demure whisp of a speaker, but it is IPX5 rated, meaning it can withstand just about any type of weather, but not immersion in liquid or powerful jets of water, such as those created by hoses or pressure washers. (Click here for an in-depth explanation of IP codes.)

One end of the BVR-XXL/2 is home to the controls: Power, Bluetooth pairing, and speaker-link buttons on one side; volume up/down (next/previous track), and play/pause buttons on the other. You can link (referred to as “pair” by Zagg) up to 100 BVR-XXL/2’s if you should somehow find a reason for this. The hills are alive!

The bottle opener—which is magnetic, to retain the bottle cap rather than releasing it into nature—is found between the controls. It’s that silver thingie in the middle of the picture uou see above.

A 3.5mm auxiliary input, USB Type-A charging port, AC port, battery charging status light, and a 3.5mm microphone jack are hidden beneath a rubberized plug on the other end of the speaker. The mic is there because the XXL/2 is loud enough that you can use it as a portable PA—for relatively small gatherings, at least.

The XXL/2’s amplifier is rated for 100 watts total, driving four 3-inch full-range speakers (15W per channel) arranged in opposing pairs at each end, and a down-firing 6-inch subwoofer (40W) flanked by passive radiators. Because the unit sprays sound from four corners, you’ll get most of what the XXL/2 has to offer sonically no matter where you’re sitting.

For an IPX5 rated speaker, I’d say the sound from the XXL/2 sits in the 95th percentile. It’s loud and it pumps a lot of bass. Given its mission, and the materials constraints placed on weatherproof speakers, its overall sonority is quite good. My only, and minor, complaint is that its perhaps a bit lacking in mid-range definition. But I’ve heard far worse speakers that buyers still love.

With a speaker at each corner, you don’t need to be at all particular about where you place the XXL/2. There will be optimal positions, of course; especially if you want stereo separation. But you don’t need to worry about walking behind the speaker and having the sound disappear just as your favorite part of the tune arrives.

Note that you can adjust the amount of treble and bass to tasted using a combination of the power, plus and minus, buttons. That won’t help the mid-range, but it allows some sonic freedom to tailor the sound to the type of music being played.

The BVR-XXL/2 is nigh on the perfect ruggedized speaker for occasions where you need a lot of volume and don’t want to worry about the weather or potential rough handling. And as I said, the sound is very good for an outdoor speaker. It’s not cheap—unless you price it by the pound, in which case, it’s a steal. I kid. I like it. For scenarios like those discussed, you will, too. Now, if you’re looking for something a bit more portable that follows the same design ethos, check out the Braven BVR-XL which is considerably smaller and lighter.