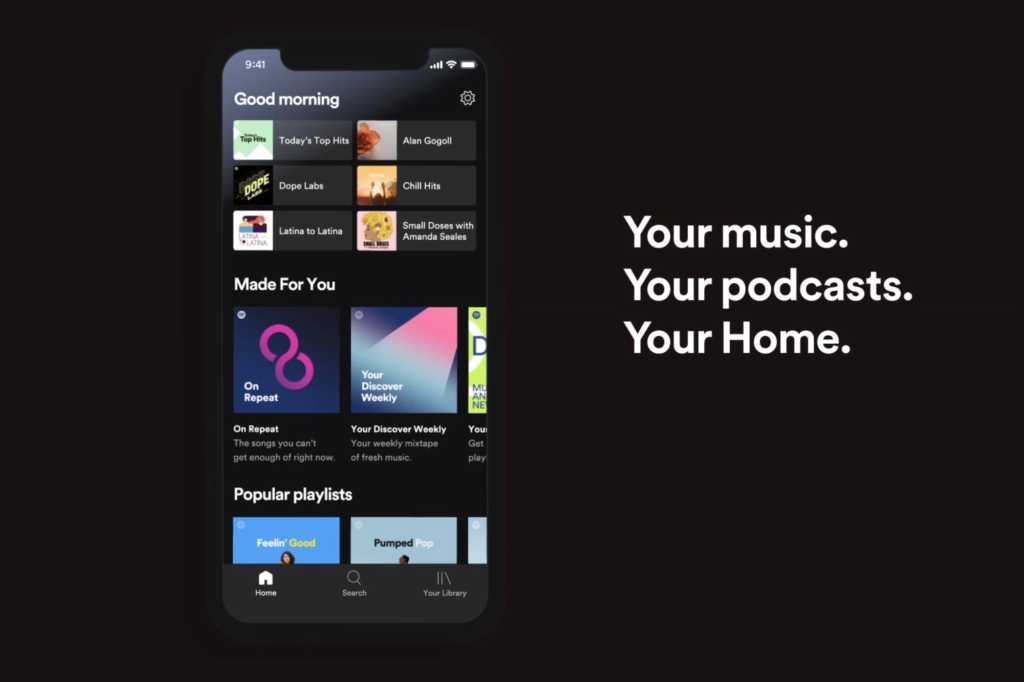 Hot on the heels of replacing its Shuffle Play button with a new, sleeker icon, Spotify is launching a revamp of its mobile homepage that puts favorite and recently played playlists front and center.

Rolling out today to both iOS and Android users, the updated Spotify app boasts a prominent new section at the top of the home screen, complete with six buttons that let you jump back into any playlists, albums, or radio mixes that you’ve recently played.

Just below those six buttons is an aptly named “Recently played” heading with a longer, scrollable list of recently played albums, playlists, and radio stations, with the list on my particular Spotify home screen featuring about 30 recent items and favorites.

Once you’ve checked out the tunes you already know, Spotify’s new mobile homepage displays a series of sections and playlists that mix new music with old favorites.

For example, there’s a section dedicated to Spotify’s automatically generated “Made for You” playlists, including Your Discover Weekly, Your Daily Mix, Your Summer Rewind, and Your Family Mix (which includes all the family-friendly tracks that your kids have been listening to).

There’s also a “More of what you like” section with genre channels based on what you’ve been playing recently, as well as “Fresh New Music,” music based on the time of day (such as the “Afternoon Delight” section that appeared on my Spotify app after lunch), radio mixes created according to your recent listening habits, and albums similar to a current favorite (for me, they’re all similar to High School Musical, my daughter’s current obsession.)

Spotify has been busy tinkering with its mobile app over the past few weeks. At the end of February, the music-streaming giant rolled out a mobile update that replaced its famous “Shuffle Play” button with a revamped version that ditches the words, replacing them with the triangular “play” icon and an inset “shuffle” icon with the familiar crisscrossing arrows. That redesign, according to Spotify, was intended to create more of a “global” experience that relies on icons rather than words.

Today’s redesign is aimed at “making it easier than ever to find something to listen to—whether a long-time favorite or brand-new discovery,” Spotify said in a blog post.

The new personalized homepage is rolling out to global users with at least a 30-day listening history.