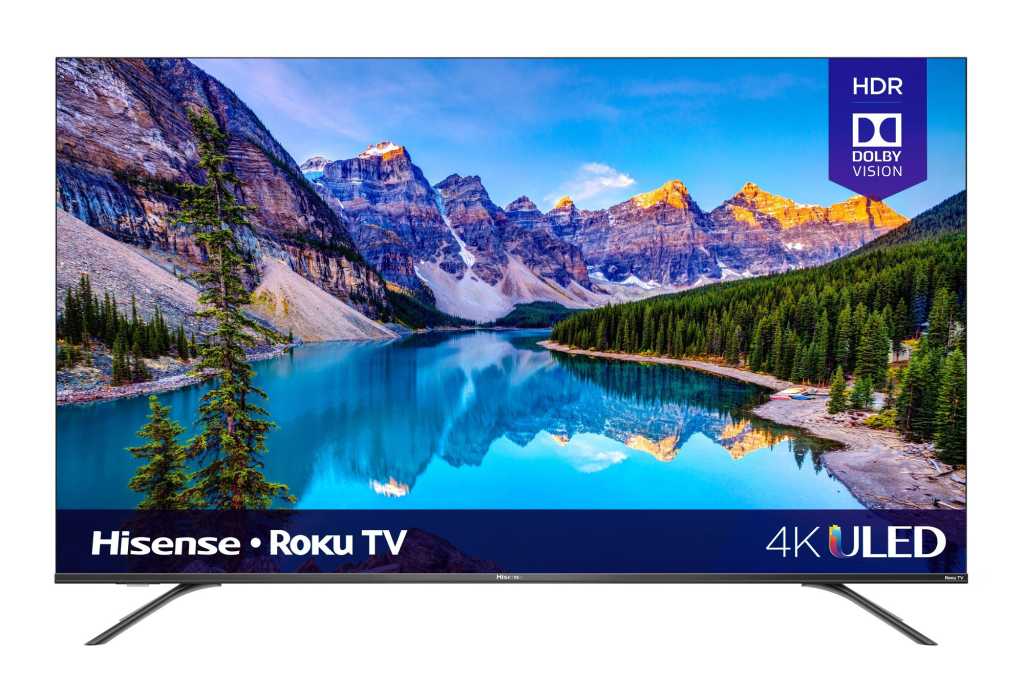 Hisense’s R8F delivers a good picture and a great smart TV OS for not a lot of money. But it’s a bummer that Hisense limits you to using Roku speakers if you want wire-free audio.

Hisense’s R8F series is the company’s second-tier TV line, but you might not realize it if you see one on display in a store. With real-world material, the Hisense R8F is everything the average viewer is looking for. That said, top-tier sets deliver even better pictured quality, and while I love the Roku experience overall, I’m tiring of the absence of Bluetooth audio support that comes with it.

The R8F I tested is a 65-inch class (64.5 inches measured diagonally), 4K UHD (3840×2160) panel with a 60HZ refresh rate that delivers 10-bit color (that’s one billion hues—far more than than the human eye can distiguish). You’ll get support for Dolby Vision, HDR10, and HLG HDR, and the R8F pushes enough nits of brightness to do something with HDR. I can’t tell you why Hisense decided to not also support HDR10+, but everything that’s available in that format is also available in Dolby Vision; so, that’s ultimately not really a big deal.

The 65-inch R8F retails for $700, while the 55-incher sells for $500. The only difference beyond the obvious is that the smaller model has 56 zones in its full array backlighting, where the larger set has 60 zones.

This review is part of TechHive’s coverage of the best smart TVs, where you’ll findreviews of competing products, plus a buyer’s guide to the features you should consider when shopping.

Note that as of 9/17/2020, Roku has addressed one of my major complaints by adding a DLNA client to the Roku Media player.

The I/O port array on the back of the R8F is more than adequate, especially given that the TV, like most, can stream everything you want without an outboard box (as I’ve already mentioned, this one uses the Roku OS). There are four HDMI ports, one supporting the Audio Return Channel (ARC); a USB port for playing back media from storage devices such as thumb drives (keyboards and mice are not supported); and coax for antenna or satellite/cable connectivity. Wi-Fi is supported at the 802.11ac level, and there’s a 10/100 ethernet port there as well.

The R8F is particulary appealing for those with legacy gear, as you’ll also encounter RCA analog audio injputs, an honest-to-goodness composite video input, a 3.5mm headphone jack, 3.5mm stereo line out, and an optical S/PDIF digital audio output for connecting to an older soundbar or audio system that lacks HDMI support. Other features include support for Google Assistant and Amazon Alexa smart speakers.

None of the Roku TVs from Hisense or TCL that I’ve reviewed recently let you pair your own Bluetooth speakers or headphones. I have a pair of Sony earphones that I’m very fond of, and needing to employ a separate Bluetooth transmitter to use them is annoying to say the least. Perhaps this is so Roku can persuade you to buy its proprietary wireless speakers, which are usable only with Roku TVs.

The R8F’s Roku interface is efficiently laid out and is extremely easy to navigate, even if I have a few nits to pick with it. For starters, it requires too many steps to change inputs (I regularly switch back and forth between a computer feed and over-the-air TV), and I don’t like having Plex as the only option for streaming movies off of my NAS box—I’d much prefer they add VLC to the mix.

Roku just updated the OS to include a more than decent channel guide. It was a nice surprise when I updated another Roku TV I’m testing, but I do wish there was an option to limit it to just showing favorites. Instead these are placed at the top of the list and you must scroll to find them. Also, there is currently no way to manually add a favorite, they’re added by Roku based on your usage. Give me the option to curate my own favorites, thank you.

The included Roku remote connects via RF and is easy to learn, although it would be even better if you could remap the shortcut buttons (on which service providers pay to advertise) to other functions or services. After all, if you don’t subscribe to the advertised services, those buttons consume valuable space but do absolutely nothing for you. Roku makes it easy, on the other hand, to personalize the home screen so you can put the services you do subscribe to front and center, and push the rest to locations that won’t waste your time.

This is one of Roku’s better remote controls (though not its best, since it doesn’t have a headphone jack). It has an onboard mic and can recognize simple voice commands for functions such as search, play/pause, replay (jumping streaming content back by seven seconds and temporarily enabling closed captioning), and a few others. You can also download and install the Roku mobile app on your Android or iOS device, which is useful for those times when you can’t find the real thing and don’t want to spend time looking for it.

Gripes aside, Roku is a great option for most users.

Given the price, I think the average viewer will be more than happy with the R8F’s image. It handled every real-world test video I threw at it quite nicely. If you’re picky, or obsessive about your TV picture, I did observe some issues here and there; but they’re the same shortcomings you’ll encounter with TVs costing four times as much, albeit to a lesser degree. The Hisense R8F is a very good TV.

As I mentioned, there are 60 zones in the array backlighting (56 on the 55-inch model), and this TV handles them pretty well considering the R8F is capable of throwing about 692 nits at you. There’s a fair amount of bleed, but it could be worse, and the display is bright enough to render HDR to good effect, if not as vibrantly as the pricier competition can.

This TV’s color isn’t particularly accurate, but the gamut is wide and it skews in what I found to be a pleasant way. The color meter showed quite a bit of color pollution in green and red, but when mixed all together, I never found myself thinking about it—and I get annoyed quickly with unpleasant skews. Sony’s color is also less accurate than some, and a whole lot of users are drawn to it. In other words, color accuracy, though important, is not the be-all, end-all of a good picture.

Motion compensation is quite good considering that the R8F is a 60Hz panel. It’s not the best I’ve seen, but best is reserved for 120Hz TVs that can employ more frames in the smoothing operation. You should ignore Hisense’s “Motion Rate 240,” spec, however, as it conflates compensatory techniques that are even more effective on true 120Hz sets.

The Spears & Munsil benchmark disc I use in my reviews revealed shimmer and moiré to be a bit of an issue with highly detailed scenes, but that’s par for the course at this price and I found the phenomena easy enough to live with. But again, the only TV I’ve seen to date that comes close to eliminating this type of artifact is the far more expensive Samsung Q900 8K UHD.

Blacks, meanwhile, are—okay. There’s bleed, as I said, but it really only gets to be an issue with small bright areas surrounded by a lot of black. This will continue to be the case to some degree with all LED-backlit LCD TVs—perhaps at least until Hisense’s two-LCD dual-image TVs reach the market. You should also keep in mind the the critiques mentioned above are for image purists.

Nice for the price

Compared to a TV of twice the price from only a few years ago—well, there really is no comparison: The R8F blows away TVs that were selling for $1,500 back then. Intense industry competition has driven manufacturers to vastly improve image quality over the last few years.

The Hisense R8F is a wonderful TV for the price and the Roku interface experience is arguably the best in the business. Just be aware of its Bluetooth audio limitation.