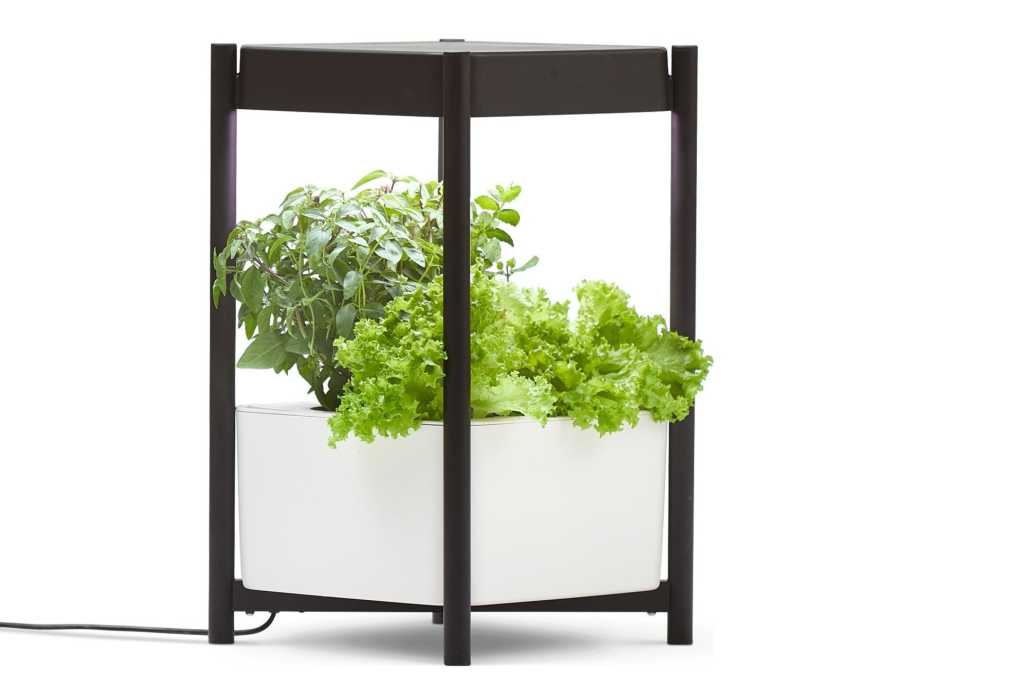 ScottsMiracle-Gro
At a Glance

A supremely easy way to grow fresh and flavorful herbs and leafy greens indoors year ‘round with minimal space, energy, and effort.

Once you’ve tasted fresh herbs and greens plucked from your own garden, you’ll never be satisfied with the produce supplied by your local grocery store or even a farmers’ market. The Miracle-Gro Twelve Indoor Growing System lets you grow all manner of herbs and green leafy vegetables indoors all year round with practically zero effort

Despite living on a 10-acre parcel in sunny northern California, I’ve never been able to grow much in the way of fresh vegetables. I know how to do it, and I obviously have the space, but two factors always get in the way: The time to do the tilling, planting, and—ugh—weeding, and the colonies of ground squirrels that live in the olive orchards surrounding my home. I tried starting outdoor gardens a couple of times, but the squirrels ravaged my plantings long before any veggies were ready for harvest.

You don’t need land, know-how, much in the way of labor, or even sunshine and warm weather to grow plants with Miracle-Gro’s system. You simply need about two square feet of your home’s floorspace, a nearby electrical outlet, a few gallons of water, seeds (or seedlings), and a little time. The one drawback is the cost of the system: With a list price of $299 (plus ongoing expenses for electricity, seeds, fertilizer, and miscellaneous supplies), you shouldn’t expect the Miracle-Gro Twelve to pay for itself anytime soon by lowering your grocery bills.

I’ve been using the system for several months and have successfully grown a variety of lettuces and cilantro from seed; and oregano and sage from seedlings. I never realized how crisp and flavorful lettuce could be, and the herbs—I used the cilantro in some homemade salsa, and the sage went in a variety of dishes—were incredibly aromatic. Apart from performing a few tasks when the system prompted (adding water and nutrients, which I’ll get into later), all I needed to do was drop the seeds and seedlings into pots. The lettuce was ready to harvest in five weeks, and the cilantro was ready a week after that. The seedlings, of course, took even less time.

Growing indoors offers several benefits beyond letting you ignore the seasons. You don’t need to worry about weeding, since there’s no chance for weed seeds to make their way into the pots. And pests—insectoid, mammalian, or what have you—won’t be able to get to them. Weeds and insect pests could get into your home if you buy seedlings at a nursery or grocery store, but those problems should be relatively easy to manage given the size of your plantings.

That size benefit is also the system’s biggest limitation: You can’t realistically grow much more than herbs, leafy greens, and perhaps small flowers destined for arrangements or for drying. You could probably start larger vegetables like zucchini, green beans, or tomatoes with it, but you’d need to move them to other containers, or more likely into an outdoor bed, in short order.

The components and the feature set

The system comes completely disassembled, and it took me about 30 minutes to screw everything together. Miracle-Gro uses two sizes of Torx screws to hold the legs, water reservoir, planting frame, cover plates, and light shade together, but helpfully includes an L-shaped driver in the package.

The kit also comes with seed-starting and transplant kits (net cups, fiber pots, and peat-based sponges), two packets of fertilizer for recirculating water-based plantings, and cover plates should you decide to leave any of its four planting locations vacant. You’ll need to provide your own seeds or seedlings, along with a couple of gallons of water.

The system has a Bluetooth radio onboard that lets you control the system with an app installed on your smartphone. A sensor in the reservoir sends a message to the app when the water level gets low (the system’s LED grow lights will also flash on and off to give you a visual notification). Miracle-Gro’s app is even more useful for tracking the lifespan of your individual plants, notifying you when your plants are ready for harvest and when they need nutrients, and even linking out to videos showing you how to harvest your plants and how to use them in recipes. There’s also a calendar in the app that will help you track when plants are started, when they should sprout, when you last fed them (and when they’ll need fertilizer again), when they should be ready for harvest, and more.

You can grow four plants at a time, and there’s about 15 inches of growth height available. Two Twelve systems can be stacked to double the number of plants you’re growing in the same square footage, but this requires an optional stacking kit that adds $30 to the system, and Miracle-Gro recommends the stack be anchored to a wall to stabilize the assembly. The app can track multiple Twelve systems independently.

Adapters for the planting frames allow you to start with seeds planted in peat-based sponges (in 1.5-inch starter pots), and then transplant those seedlings to 4-inch coir-fiber pots (the material is extracted from the outer husks of coconuts) for the rest of the growing cycle. If you want faster results, you can buy seedlings in starter packs and plant them directly in the 4-inch pots. The sponges and the coir-fiber pots are designed to prevent soil particles from getting into the recirculating water pump (there’s also a filter surrounding the pump, just in case). The pump pushes water (and nutrients) up a pipe in the middle of the system and out of four nozzles that keep the material in the pots moist, but not saturated to the point that the plants’ roots will rot.

A grid of LED lights in the system’s lid operates on a schedule that you create in the app, turning on to “grow” mode for 14 hours each day and then turning off. You can use the app to set the time that the lights’ turn on and off, and you can override that schedule at any time. Miracle-Gro describes the lighting as a “60W, cool-spectrum LED grow light,” and I measured the system’s total power consumption at the outlet as being about 73 watts, a number that includes the recirculating pump.

It’s not an entirely labor-free system

I’ve described the Miracle-Gro Twelve Indoor Growing System so far as easy to use and nearly foolproof, but growing greens in it isn’t entirely effortless. In addition to needing to replenish its water supply and add nutrients when prompted, you’ll need to monitor the plants’ roots to ensure they don’t impede the water pump’s intake. If any of the roots get too long, you’ll need to trim them with a pair of scissors.

When you harvest your plants, you’ll need to switch out the entire water supply. This involves turning the pump off, taking all the pots and the planting frame out, removing the pipe-and-nozzle assembly from the water pump, and draining the system’s reservoir.

This is accomplished by attaching a short vinyl hose (provided) to the pump, turning the pump back on, and evacuating the water into a bucket. Once the reservoir is empty and you’ve turned the pump off again, you’ll want to wipe down any residue from the bottom and sides of the reservoir. Do all this carefully and you won’t make too much of a mess; but be prepared to get at least a little water on the floor.

Not to belabor the point, but this is far from the least-expensive means of growing fresh vegetables. In addition to the $299 starting cost, you’ll have recurring costs once you use up the consumables that are included in the kit. A set of four seed-starter kits costs $10, the same number of transplant cups cost $20, and a package of 12 nutrient packets—enough for one year—costs $20.

Assuming you start four sets of plants from seed, transplant them, and harvest every eight weeks, you’ll spend about $200 per year growing greens. That’s roughly six seed-starters kits: $60, six transplant kits: $120, and a one-year supply of nutrients: $20), plus the cost of seeds and soil. But as I said up top: The taste of homegrown produce is out of this world, and the Miracle-Gro Twelve Indoor Growing System makes it so easy that you’ll never want to put up with store-bought lettuce and herbs again.