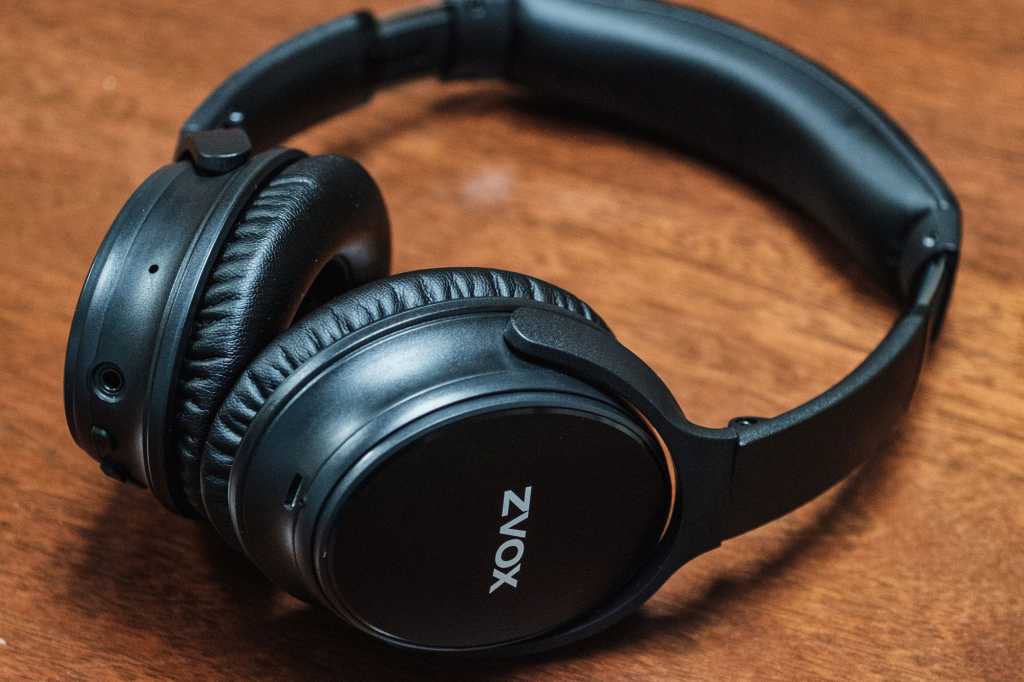 Image: Zvox Audio
At a Glance

This is a fine wireless, over-ear ANC headphone. The AccuVoice feature provides very subtle improvement in vocal presence, but the sound is excellent without it as well.

Zvox, best known for soundbars and soundbases, has expanded its product lineup to include Bluetooth headphones with active noise cancellation (ANC) and even hearing aids. So, I decided to check out the AV50 headphones, which are touted as the world’s first headphone designed for users aged 55 and older.

The feature aimed specifically at that demographic is much more subtle than I expected, but the overall sound is excellent in any case.

The AV50 is relatively small and lightweight at only 8.1 ounces, and it can be folded into a small hard-shell case for travelling. Single dynamic drivers utilize neodymium magnets and achieve a specified frequency range from 15Hz to 23kHz (±4dB).

Bluetooth 4.1 provides wireless connectivity using the aptX, AAC, and SBC codecs as well as A2DP, AVRCP, HFP, and HSP profiles. It also comes with a 3.5mm cable for a wired connection.

Active noise cancellation (ANC) generates sound that is 180 degrees out of phase with ambient sound picked up by two onboard microphones, mixing both signals to reduce the level of the ambient sound by means of phase-inverted cancellation. Unlike other ANC headphones, the AV50 must be fully powered on to activate its noise cancellation. I prefer having the option to engage ANC without powering Bluetooth to enjoy some peace and quiet without audio while drawing less power from the battery. To extend the battery life, you can listen to audio without ANC.

The feature aimed specifically at older users is called AccuVoice, which works in conjunction with ANC. It purports to enhance voices while reducing unwanted noise, so you understand dialog better without having to turn up the volume. Specifically, it gently raises the level and compresses the dynamics of frequencies from 500- to 3,000Hz. This is the frequency range of speech consonants, which are critical for intelligibility. Unfortunately, you can’t engage ANC without AccuVoice; I wish that was an option.

Like virtually all Bluetooth headphones, the AV50 can be used with a mobile phone to answer calls and speak with callers using an onboard microphone in the right earcup. That mic is independent from the two microphones used by the ANC system.

The fourth button is separate from the other three. It turns ANC/AccuVoice on and off.

At the bottom of the right earcup is a 3.5mm jack for a wired connection to the source device. A mini USB port at the bottom of the left earcup lets you charge the battery. Finally, a multicolored LED between the ANC and other buttons indicates the status of pairing, ANC, and Bluetooth. A blue LED next to the USB port indicates charging status.

The AV50 feels somewhat flimsy, and the earcups are relatively small, but I got them to seat well over my ears after some fussing. Oddly, adjusting the position of the earcups on my head while playing music with ANC on caused some crackling and distortion, but not with ANC off.

Since AccuVoice is intended to make voices clearer, I focused on music with vocals. Listening to Tidal Master tracks (uncompressed or losslessly compressed high-res audio), I started with “I Got Rhythm” from Love is Here to Stay, by Diana Krall and Tony Bennett. I couldn’t hear much difference at all between ANC/AccuVoice on and off. The vocals were clean and well-defined, the piano was clear and natural, and the drum brushes were crisp.

The same was true on “Green Flower Street” from Donald Fagen’s album Nightfly. The vocals were slightly more present with ANC/AccuVoice on, and the overall sound was a bit warmer and higher in level, but the difference was subtle.

Marvin Gaye’s classic “What’s Going On” from the album of the same name sounded great. With ANC/AccuVoice on, the lead vocal was a bit more present and up-front, and the overall sound was a bit richer with beefier bass.

“Free Man in Paris” from Joni Mitchell’s album Court and Spark was much the same. With ANC/AccuVoice on, the overall sound was richer, the bass was bigger, and the vocal was slightly more present. On or off, the track sounded excellent.

Moving on to classical music, I listened to Cecelia Bartoli sing Nell’ attendere mio bene from Nicola Porpora’s opera Polifemo on the album Farinelli with Il Giardino Armonico under the direction of Giovanni Antonini. With ANC/AccuVoice on, the overall sound was a touch warmer and richer, and the vocal was a bit more forward, but the difference between ANC/AccuVoice on and off was very subtle.

Finally, I took the AV50 on a drive around my neighborhood to test its noise cancelling in a somewhat noisy environment. The acoustic isolation of the earpads is quite good, and ANC is excellent, reducing the level of ambient noise significantly. As before, with ANC on, vocals were a bit more present and forward, and the overall level seemed a bit higher, but it wasn’t a dramatic difference.

I compared the performance of the AV50 with the Edifier W860NB, which I reviewed here, because it’s in the same price range. I also compared it with the Sony WH-1000XM3, reviewed here, even though Sony’s headphone is twice the price of the AV50. For this comparison, ANC was on the entire time, and I matched the level in each headphone as best I could by ear.

Listening to “Time Out of Mind” from Steely Dan’s album Gaucho, the Edifier sounded leaner and more restrained, and the bass was slightly subdued. The Zvox sounded richer and warmer, and the bass was perhaps just a tad overbalanced. The Sony was even richer, with the bass drum more pronounced than with the other two headphones.

The WH-1000XM3 was the most comfortable headphone to wear by far. Also, the Edifier and Sony did not crackle when the earcups were jiggled. Another comparative factor is the size of the case; the Zvox case is the smallest, making it easier to pack in your carry-on bag. The Edifier case is the largest, with the Sony in the middle.

Which model you would prefer depends on your taste in audio reproduction. If you like a leaner sound, I recommend the Edifier W860NB (with ANC on; turning it off degrades the sound quality significantly, as I discuss in my review). But if you gravitate toward a richer sound, the Zvox and Sony fit that bill nicely.

The Zvox AV50 is an excellent wireless ANC headphone. The sound quality is rich and clear, and the noise cancellation is very effective. I found the AccuVoice feature to provide very subtle improvement in vocal presence and overall richness, but not nearly as much as I expected. It sounds just fine with ANC/AccuVoice off, which I can’t say about many ANC headphones.

On the downside, the build quality feels somewhat flimsy, and the sound crackles with ANC on when shifting the earcups to get a good fit. Earlier, I said that I’d prefer the AccuVoice feature to be independent of ANC, but since its effect is so subtle, that’s not really a concern for me anymore.

At a penny less than $150, the AV50 is a great value. If you’re in the market for over-ear ANC headphones, this one is worth a serious listen.