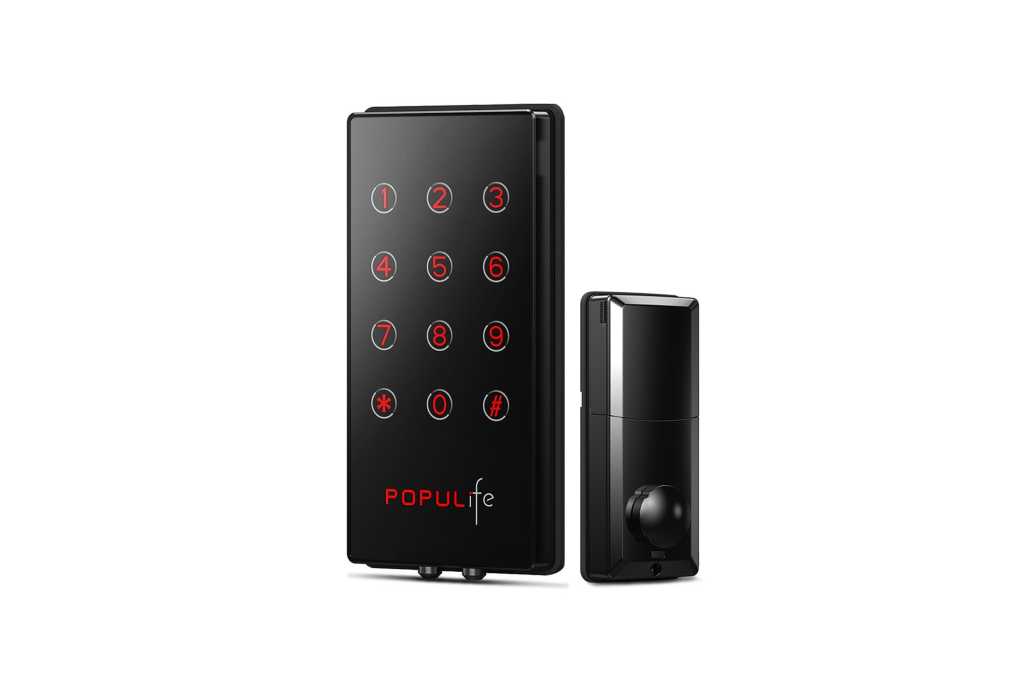 Image: Populife
At a Glance

Populife’s dirt-cheap deadbolt fails to impress, thanks to its immature hardware and a dearth of features.

Populife’s smart lock certainly looks appealing. The exterior escutcheon is slim, clad in jet black, and features a sleek keypad illuminated in red light. The interior side of things is considerably more industrial in appearance, but I will say I’ve seen worse. And for a mere $65, it’s very inexpensive. Sadly, even at this budget price, it’s hard to recommend the Populife Smart Deadbolt to any but the most cash-strapped of smart-home owners.

Populife smart lock doesn’t immediately appear to offer anything particularly unusual in terms of hardware. The two components sandwich each side of the door, and two screws (with an optional third, if you drill an extra hole in the door) connect the two pieces. The interior escutcheon is a two-part affair, attaching to a metal bracket that holds everything in place. A cable snakes through the hole in the door to electronically connect the two components.

An optional door sensor can also be wired into the device directly, so the lock can determine whether the door is ajar. A 9-volt battery terminal below the keypad gives you a lifeline to get back in if the four AA batteries (not included) that power the lock happen to die while you’re out. Put it all together and the unit has a distinct resemblance to the Igloohome series of deadbolts.

At the time, I declared Igloohome to be one of the most frustrating locks on the market to install, but Populife certainly gives Igloohome a run for its money. The lock’s instruction manual walks you through some basic setup, and while getting the various pieces situated securely is difficult enough, step 10 is where things go downright crazy. Most smart locks come with the tailpiece—the metal bar that allows the lock mechanism to physically turn—already installed. In Populife’s case, the tailpiece (Populife calls it the “access handle”) is not only not preinstalled on the lock, it must be physically attached with a tiny connecting plate and two even tinier screws.

These screws are so small that Populife includes a minuscule screwdriver with which to attach them. This process requires the delicacy of a surgeon and the patience of a saint, and if you drop one of these screws you can be sure it will be gone forever. After that, you’ll probably need to snap off the end of the tailpiece, much like the U-tec Ultraloq requires (a requirement U-tec has since eliminated), because it comes ready for the thickest possible door. The good news: Populife’s tailpiece can be shortened with two pairs of pliers rather than requiring a hacksaw.

Wrestling the various components together isn’t easy, and the hardware ultimately requires significant patience to get everything seated properly. As with many smart locks, the screws holding the two escutcheons together can’t be overtightened, or the lock won’t be able to turn. Getting it all just so takes some trial and error, particularly maneuvering the wiring into the right place, but after nearly an hour of finagling it, I finally had the lock seated properly on the door.

And it didn’t work. I first downloaded the Populife app and paired the lock with my phone via Bluetooth, which was successful. But when I tried to use the app to operate the lock, nothing happened. Whether tapping in the preassigned seven-digit PIN or using the app to unlock the door, nothing would disengage the lock. The Populife would simply beep and do nothing.

Populife’s tech support was well-meaning but unable to help, suggesting that I disassemble and reassemble the lock, and requesting videos of me using the keypad to ensure I was pressing the right buttons. (I was.) After nearly a week of back and forth—all via the agonizingly slow process of emailing with someone in China at a clip of one message per day—tech support simply stopped responding. I finally requested a replacement unit from Populife’s marketing team and when it arrived, I had to go through the whole setup process once again.

The replacement unit worked as expected, and after nearly two weeks of headaches I was able to finally start testing the lock in earnest. Unfortunately, I quickly discovered that there just wasn’t a lot to test, because Populife’s focus on price comes at the expense of features. Since it’s a Bluetooth-only lock, you must interact either with the keypad directly or be standing within a few yards of the lock if you want to use the app. In other words, there’s no remote control when you’re away from home, because the lock can’t connect to your Wi-Fi network.

You can use the app to assign a Bluetooth key to other phones—and these can be time-limited or even one-time-use, at your discretion—or you can create new PINs for those who want app-less access. The catch? You can’t customize the PINs, and Populife’s codes are a whopping eight digits long. (For some reason, the admin/master PIN, which also can’t be changed, is only seven digits long.)

Additional features include an automatic locking system that relocks the door when the magnetic sensor detects it has been closed, but this is immediate; there’s no way to program a delay after which the door is automatically locked. There’s also mention in the app of an “unlock remotely” setting, but the gateway required to make this happen does not (per the company) yet exist. Finally, a logging system is included, but it only keeps track of interactions via the app, not unlock actions that take place via PIN code on the lock’s keypad.

There is one thing saving Populife from the scrap heap, and that’s the price. At just $65, it is the cheapest smart lock on the market that I’ve encountered—even if, realistically, it isn’t all that smart. That said, other budget options abound, and if money’s the issue, you might want to consider the Wyze Lock. It will cost $90 when it ships later this month, but it supports Wi-Fi connectivity in addition to Bluetooth, so you’ll be able to control it from anywhere.