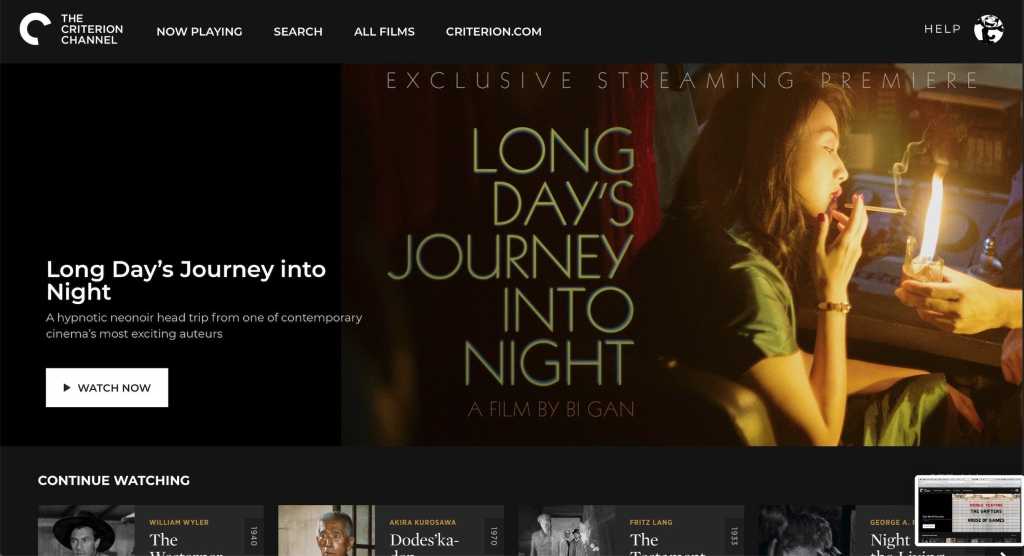 The Criterion Channel is an essential service for passionate, curious, and adventurous movie fans; one that is also devoted to the history, preservation, and joy of film.

The Criterion Channel is the best movie-streaming service you’ve never heard of. A subscription costs about the same as Netflix or Hulu: $10.99 per month, or $99.99 if paid annually (about $8.33 per month). Instead of offering new movies that have finished their theater runs, original flicks produced in house, or binge-worthy TV series, the Criterion Channel’s library consists of about 2,000 carefully selected films, many of them presented as curated collections accompanied by the extra materials normally found only on DVD or Blu-ray disc releases.

Not every film on offer is a masterpiece, but the vast majority are least good. The website They Shoot Pictures, Don’t They? maintains what I consider to be the most reliable list of the 100 best films ever made, and you can watch at least half of those movies on The Criterion Channel.

That said, this service is very definitely geared toward the adventurous viewer. Many of the titles are in languages other than English (so, you might need to read subtitles), and the newer titles on rotation when I wrote this review are, to put it politely, quite obscure. A few of the less obscure ones are Gabriel Abrantes & Daniel Schmidt’s Diamantino, from Portugal; Jafar Panahi’s 3 Faces, from Iran; Bi Gan’s Long Day’s Journey Into Night, from France; and Hu Bo’s An Elephant Sitting Still, from China.

Geared for the enthusiast

Hidden treasures await your discovery, too. Are you a Christopher Nolan fan? You won’t find The Dark Knight or Interstellar here, but you can watch Nolan’s fascinating micro-budget debut feature Following, and his early short film Doodlebug. Did you like Josh & Benny Safdie’s Uncut Gems, starring Adam Sandler? That’s not here, either, but there is a whole selection of the brothers’ early short films and their 2009 feature Daddy Longlegs.

Did you swoon over Guillermo Del Toro’s The Shape of Water? His Mexican horror film Cronos is here. The channel doesn’t offer any Quentin Tarantino films, but it does offer Toshiya Fujita’s Lady Snowblood (1973), a major inspiration for Kill Bill. Odd gems like Leos Carax’s The Lovers on the Bridge (1991), Shane Carruth’s Upstream Color (2013), Louis Malle’s Vanya on 42nd Street, and Ana Lily Amirpour’s A Girl Walks Home Alone at Night (2014) are worth finding.

While very little on the service is technically new, the creative minds at the Criterion Channel work hard at making old stuff seem new and exciting again. A curated batch of films arrives each month, such as February’s Sidney Poitier collection, which includes no less than 17 films, plus a video introduction to the series. Earlier collections included a Burt Lancaster series, “Film Plays Itself” (i.e. films about the movie business), a Bette Davis series, and films about dogs.

The channel also suggests double features that viewers can select and bookmark. These include brainy crime films, such as Stephen Frears’s The Grifters (1990) paired with David Mamet’s House of Games (1987); or two films adapted from the same play: Jean Renoir’s The Lower Depths (1936) and Akira Kurosawa’s The Lower Depths (1957), for example. The site also curates “Saturday Matinees,” or movies that are considered at least somewhat kid friendly: Oliver!, The Court Jester, The Black Stallion, The Adventures of Prince Achmed, et al).

The channel doesn’t offer any TV series to binge, unless you count auteur-friendly offerings such as Rainer Werner Fassbinder’s Berlin Alexanderplatz (1980), Ingmar Bergman’s Fanny and Alexander (1982), Robert Altman’s Tanner ‘88 (1988), or John Lurie’s Fishing with John (1992) that originally debuted on television.

Some specific directors have their own collections, and certain Criterion titles that have been released on DVD and Blu-ray are available to stream, complete with all their bonus features and even commentary tracks. The service offers a commentary track for Taxi Driver by Martin Scorsese and screenwriter Paul Schrader, recorded way back in 1990 for the Criterion LaserDisc edition. There are many short featurettes exclusive to the site, with directors talking about their favorite movies. Recent Oscar-winner Bong Joon-ho paid a visit to the Criterion offices for one of these. A series called “Observations on Film Art” takes an in-depth look at some of the titles after (or before) you watch the actual film. And another series allows you to watch a short film paired with a similarly themed feature film.

Sadly, as with most other streaming services, films expire from time to time. In October, 2019, for Halloween, the service added all nine of the brilliant “B”-level horror films produced by Val Lewton between 1942 and 1946, and those are already gone. The Criterion Channel website lists the movies that will be expiring at the end of the month, so it’s easy to keep track of want to see before it’s gone.

Another downside is that the Criterion Channel app isn’t broadly available on smart TVs other than models that use the Amazon Fire TV, Android TV, or Roku operating systems. There are also apps for Android and iOS mobile devices, and for Amazon Fire TV, Apple TV, and Roku media streamers. But when you want to manage your queue or change your account settings, it’s much better to log into your account using a web browser. You can sort the service’s entire collection by genre, year, title, director, or country, and there’s a “filter” button that allows for even deeper sorting. If you’re in the mood for a comedy, a kids’ film, an animated short, a Western, or a movie from Argentina or India, the website is the place to go. Add a movie to you watch list, and then bring up the app on your TV.

On a usability level, the channel is every bit as good as the top three streaming services, with strong, clear picture quality, crisp sound, legible subtitles, and intuitive controls. The mobile app works great, too, and you can download content for offline viewing. The only slightly confusing element is that the Roku version comes up with three options, Search, Explore, and Library. It defaults to Explore, which essentially offers most of the new content and curated lists. Library is where you’ll find your queue and recently watched titles, but “library” seems like the wrong word for it.

With the demise of such streaming services as FilmStruck and We Are Colony, the Criterion Channel is one of the few video-on-demand services to offer a deep library of classic films, and it does so with an eye on film preservation and history (Fandor is another, though it’s more focused on indie films and its future is cloudy). If you love movies, or if you miss the days of DVD and Blu-ray discs and all the extras that come with them (but don’t want to deal with the cost or storage requirements associated with that media), you will love the Criterion Channel.